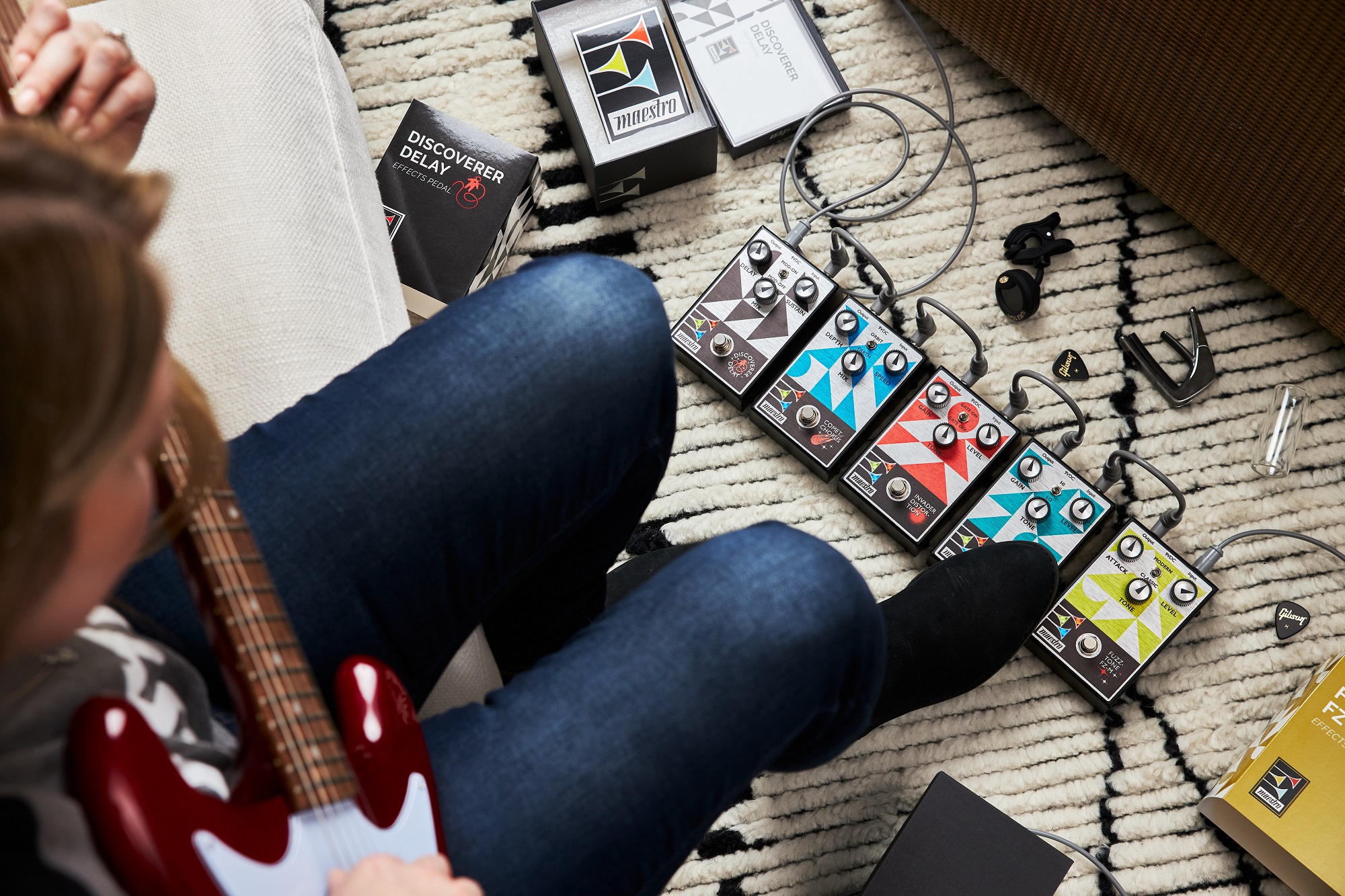 By leveraging its iconic past and leaning into an innovative future, Gibson–the iconic American instrument brand–has set the stage for the next era of sound for present and future generations. When Gibson brought Maestro into the world 60 years ago, no one could have predicted its trailblazing success. Now, after decades, Gibson has revived the brand for 2022 with the debut of the Maestro Original Collection line of effects pedals with five new pedals–the Fuzz-Tone FZ-M, Invader Distortion, Ranger Overdrive, Comet Chorus, and Discoverer Delay–all designed, voiced, and styled for the musician looking to shape a unique sound. The Maestro Original Collection pays tribute in sound and style to the brand’s pioneering and much beloved classic models, while staying true to Maestro’s trailblazing spirit with modern features, expanded versatility, and advanced tone-tweaking capabilities. Maestro is available worldwide at authorized Gibson dealers; for more information visit: www.maestroelectronics.com.

As the founder of effects, Maestro’s influence has shaped music as we know it from The Rolling Stones to the Raconteurs, Pete Townshend to George Harrison, Clapton to Frampton, and the Foo Fighters to the Black Keys, Maestro has been there from the beginning to help artists achieve the sound they heard in their heads and their hearts, their signature sound.

“Maestro was the first commercially successful pedal, it changed everything, and set the entire world of pedals and effects into motion,” says Mat Koehler, Senior Director of Product Development, Gibson Brands. “We’re using the distinct Maestro aesthetic to develop unique takes on each of these effects in a way that’s fun and looks back at the past, but with an awareness of what modern guitarists require. Maestro sounds are relevant to new, casual, and professional level players and everyone at Gibson felt a responsibility and obligation to revive Maestro because it’s vital to pedal history.”

“Restoring a legendary brand is a thrilling challenge. Maestro has a definitive heritage to honor, but what becomes almost more important is building the new legacy for this brand,” adds Sterling Doak, Director of Marketing, Gibson Brands. “Writing this next chapter for Maestro means creating energy and providing tools for our fans to shape their sound. Now players all over the world will create this new sonic legacy, and we encourage everyone to plug-in, dial-up your settings, and shape your sound.”

Each Maestro pedal functions as an innovative “two-in-one” pedal, with a single toggle that switches between two distinct voicings. Each features a straightforward three knob set-up, true bypass switching, and a more ergonomic, pedalboard friendly wedge profile. The new Fuzz-Tone FZ-M is reminiscent of the instantly recognizable tones of the first-ever Maestro pedal, the much-mythologized FZ-1 which fuels Keith Richard’s groundbreaking riff on The Rolling Stones’ “(I Can’t Get No) Satisfaction.” But flip the toggle from “classic” to “modern,” and get a full frequency, grinding, contemporary fuzz beast at your fingertips. The Comet Chorus conjures a warm, classic analog chorus tone with a subtle cosmic swirl effect in “Earth” mode. Flip the toggle to “Orbit,” however, and your sound gets space-y with the addition of a rotary speaker-like vibrato and tremolo effect, tweakable via an internal trim pot.

Explore the new Maestro Original Collection below and for a deeper dive into the history of Maestro, visit: https://www.maestroelectronics.com/en-US/.

Maestro created the world’s first fuzz pedal – the Maestro Fuzz-Tone FZ-1 – the legendary sound on the Rolling Stones’ pivotal song “(I Can’t Get No) Satisfaction” which became the group’s first #1 U.S. hit. Introducing the new Maestro Fuzz-Tone FZ-M, an all-analog pedal that boasts two-in-one functionality for increased sonic versatility with both an FZ-1 inspired fuzz sound and a thicker, more modern fuzz tone. Its 3-knob control layout gives you intuitive control. The Attack knob controls the amount of fuzz. The Tone control lets you adjust the timbre from bright and raspy to warm and wooly and anywhere in between. Use the Level control to set the output volume; it can go way beyond unity gain when desired. The true bypass footswitch triggers the LED lights in the bugles in the Maestro logo when it’s on, so you’ll always know when the effect is active. Watch and share the Fuzz-Tone FZ-M video HERE, and the Fuzz-Tone FZ-M demo video, HERE.

Inspired by the overdriven tones of some of the world’s most cherished vintage tube amps, the Maestro Ranger Overdrive is a modern, all-analog overdrive pedal featuring a Mode toggle switch that provides two different tonalities; a warm, expressive, amp-like overdrive and a second tonality that’s slightly cleaner and exceptionally touch-sensitive; it blends in some of the clean signal and is a great choice for use as an “always-on” effect that can be controlled with your pick attack and your guitar’s volume control. The Ranger’s classic 3-knob layout provides intuitive adjustment of Gain (amount of overdrive), Tone, and output Level, with plenty of volume on tap to go well beyond unity gain. You can easily use the Ranger Overdrive as a boost to hit the input of your tube amp harder for even more grit and dirt. The true bypass footswitch triggers the LED lights in the bugles in the Maestro logo when it’s on, so you’ll always know when the effect is active. Watch and share the Ranger Overdrive video HERE, and the Ranger Overdrive demo, HERE.

The Maestro Invader Distortion is a high-gain, all-analog modern distortion pedal with an aggressive, dominant sonic character and rich harmonics, generating a wide range of distorted sounds. The 3-knob control layout offers intuitive control over Gain (distortion amount), Tone, and output Level, with more than enough volume on tap to easily exceed unity gain when desired. Players can also engage a built-in noise gate with the top panel toggle switch. An internal trim pot on the circuit board allows the user to adjust the level of the noise gate’s Threshold. Using a small screwdriver, turn this control up for a higher Threshold level, and down for a lower Threshold level. The true bypass footswitch triggers the LED lights in the bugles in the Maestro logo when it’s on, so you’ll always know when the effect is active. Watch and share the Invader Distortion video, HERE, and the Invader Distortion demo video, HERE.

The Maestro Comet Chorus uses iconic analog bucket brigade device (BBD) technology to deliver warm, classic chorus tones. This all-analog pedal boasts a Mode toggle switch for increased sonic versatility. The “Earth” mode provides an optimized, shimmering chorus effect, while “Orbit” mode adds some amplitude modulation to the chorused sound, more accurately simulating the sonic complexities of a rotary speaker. An internal trim pot allows the user to adjust the level of the Orbit effect to taste. The intuitive 3-knob layout lets you quickly dial up the Depth (amount of pitch variation), Speed (modulation rate) of the chorusing, and adjust the amount of pitch modulated signal that is blended in with the dry signal by using the Mix control. The true bypass footswitch triggers the LED lights in the bugles in the Maestro logo when it’s on, so you’ll always know when the effect is active. Watch and share the Comet Chorus video HERE, and the Comet Chorus demo video, HERE.

The Maestro Discoverer Delay is a modern analog delay pedal that proudly utilizes legendary analog bucket brigade device (BBD) technology to deliver classic, warm, and inviting delay sounds. The intuitive 3-knob control layout lets users quickly dial up the length of the Delay time (with a range from 20ms to 600ms), the amount of Sustain (delay repeats), and adjust the level of the delays in the Mix. A toggle switch engages built-in modulation that applies anything from a slightly saturated, tape-like wow and flutter effect to a heavily pitch-shifted modulation effect to the delayed signal. Two internal trim pots allow the user to adjust the Rate (speed) and Width (sweep range) of the modulation that operates when the Mode switch is in the up (MOD-ON) position. Using a small screwdriver, turn clockwise to increase, counterclockwise to decrease the modulation Rate and Width. The true bypass footswitch triggers the LED lights in the bugles in the Maestro logo when it’s on, so you’ll always know when the effect is active. Watch and share the Discoverer Delay video, HERE, and the Discoverer Delay demo video, HERE.

Through the decades that following its initial launch, Maestro’s legend has only grown. Once the vintage pedal market kicked into high gear, original Maestro – FZ-1s, PS-1s and other models – began to fetch astronomical prices, with sonic experimenters and aficionados searching high and low to get their hands on these highly sought-after pieces of music history. Now, Gibson has made that quest as simple as heading down to your local music store or logging on to your favorite online retailer. “As a brand, we wanted to bring Maestro back to what it was in its heyday,” says Craig Hockenberry, Director of Engineering, Gibson Brands, and Lead Designer of Maestro. “There’s such a strong interest in the original pedals, and we thought it was time to bring the brand back, both for those who experienced it the first time and all the guitarists who have never had the opportunity to use a Maestro product. The thing that we’re really after with the new pedals is not only capturing the spirit of the sound of the originals, but also the look, the feel, and the vibe,” Hockenberry adds.

In essence, when it comes to Maestro, once again the sky’s the limit. And there is plenty of new Maestro product to play with. In addition to the Original Collection’s Fuzz-Tone FZ-M, Comet Chorus, Ranger Overdrive, Invader Distortion, and Discover Delay, a second round of five pedals will see release in late 2022, and it will likewise speak directly to Maestro’s DNA while catering to the needs of today’s players. Gibson is also developing a Maestro Custom Shop Collection, featuring extremely limited runs of pedals built to the precise specs of the original designs. “I don’t think there’s any ceiling in terms of what Maestro can do,” Hockenberry says. “Given Maestro’s history and legacy, it has certainly earned the right to play anywhere in the effects world. When it comes to Maestro in 2022, all you have to do is use your imagination. That’s where Maestro will go and where Maestro will be.”