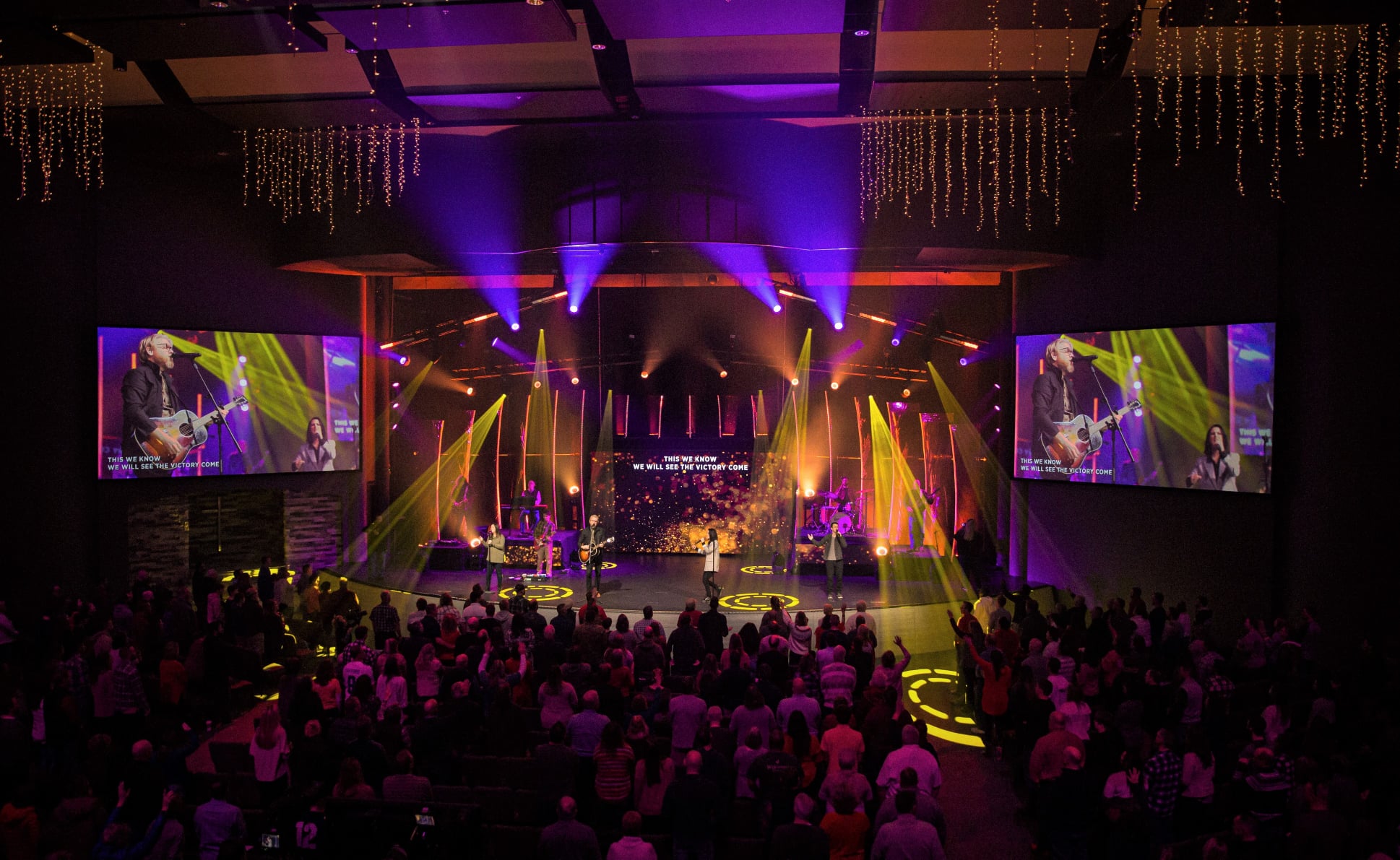 Even in the midst of the long, cold days of the pandemic, the spirit of hope and renewal glowed brightly. One such example can be seen quite vividly at the 183-year old Connection Pointe Christian Church outside Indianapolis, where a refurbished lighting rig and a fresh approach to design have brought a new level of immersion and engagement to services.

Last year, the multi-generational church replaced most of its lamp-based fixtures with a new all-LED system featuring many of CHAUVET Professional’s latest and most advanced product, including the Maverick Force S Spot.

The new LED rig was only one of the changes, however, that would redefine lighting at Connection Pointe. Along with the upgraded fixtures, the church also got a brand new LD, one with experience lighting houses of worship as well as entertainment venues. Alexander Lehman joined the church’s team and became part of a new design philosophy that emphasized building engagement with set pieces.

“I took on the LD role here in Indianapolis towards the end of September and immediately was thrown into a new stage set project,” said Lehman. “It truly would have been impossible for me without our volunteers, Creative Director Aaron Williams, our Creative Arts Pastor, Dan Lidstone, and Production Director Michael Montanari, as well as the rest of our production staff team: Jess Jones, Scott Boers, Brandon Rees, and Audrey Williams.”

The new approach that Lehman became a critical part of called for focusing less heavily on LED screens and more on making set pieces the focal point of the stage design.

“We wanted the fins to be able to carry their own weight in moments where the entire lighting rig might be scaled down but also still punch when everything is on and moving,” he explained. “Of course, it would have been next to impossible to do this with our older fixtures, so the upgrade was critical.”

Speaking of the 350-watt Maverick moving fixture, Lehman said: “They open up a world of creative possibilities, which really help in our designs. We use them quite often for gobos. I am a big fan of using gobos, both on the stage and in the audience. They add movement and texture, and make a room feel full without the fixture itself needing to move. Plus, when we want them to, they can definitely add a wow factor to our services.”

Also essential to the new design philosophy at Connection Pointe are the rig’s COLORado Batten Quad 6 linear fixtures, which are used to uplight the set pieces on the floor and above the video wall. The video wall itself, though deemphasized in the new approach, is pulled into the overall design by being outlined with LED strips.

Color washes are also relied on frequently in the church’s new design approach, both for lighting the band and washing the audience. Lehman flies two of the rigs R3X Wash fixtures on truss and uses them to wash the band. The remaining four units are part of the ground package.

The rig’s Rogue R2X Wash fixtures are flown four apiece on four stick truss structures, while the six COLORado Solo Battens, and 22 of the COLORado IP par units are used to light the audience.

It is through lighting the audience that the designers can extend the atmosphere created by the set pieces on stage throughout the entire room. That, says Lehman, was the goal the church had in mind when it looked past the pandemic to explore new, upbeat ways to light services in the future.