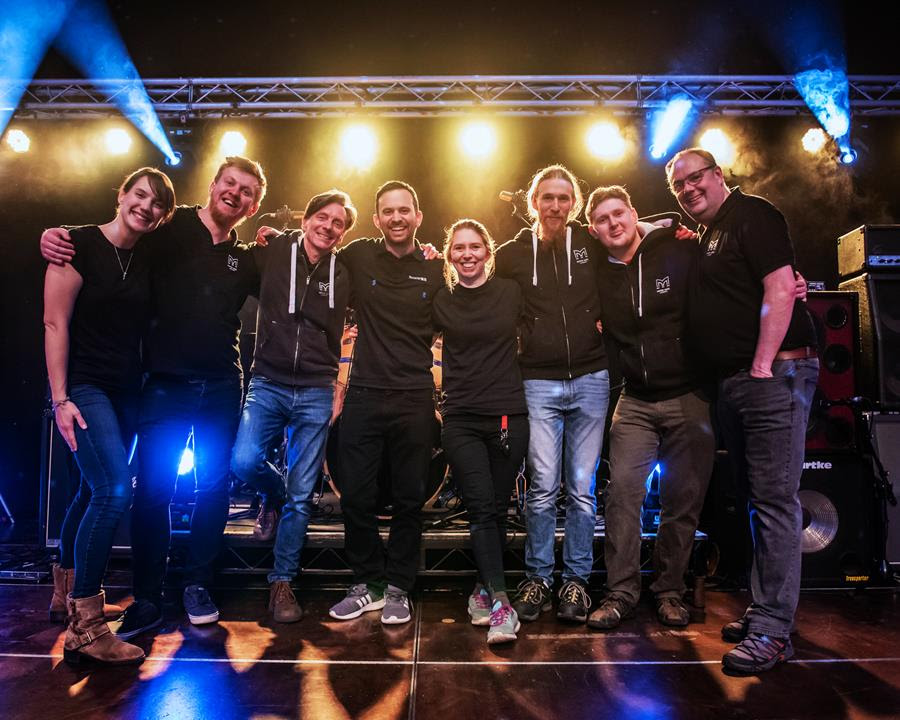 Buckinghamshire Music Trust (BMT’s) Battle of the Bands (BOTB) contest for young aspiring musicians was this year blessed by having two of the world’s leading pro audio manufacturers provide a top tier concert touring spec. By being able to broadcast their sound through a premier touring PA, on a Dante backbone, will have taken the 12 bands competing in the final into new territory. The two High Wycombe-based manufacturers concerned were Martin Audio, and Focusrite Pro, both now under the umbrella of parent company, Focusrite plc.

It was Stephen Button, Focusrite’s EMEA Channel Marketing Executive, who established the relationship with Buckinghamshire Music Trust (BMT) several years ago. It started when he helped them out as a local musician with their monthly event Guitari Lounge, an open mic night created for under-18-year-olds. 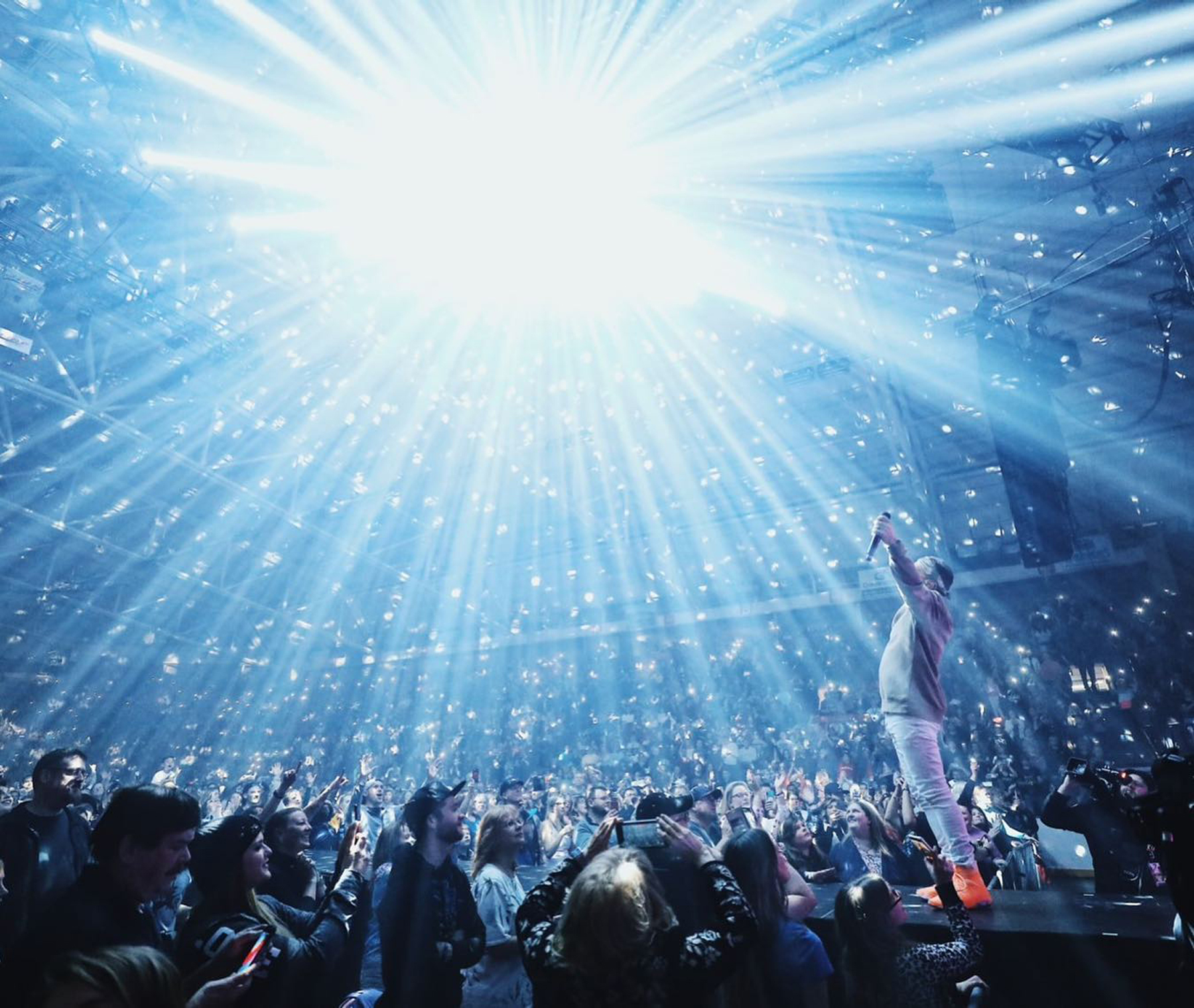 When Christian hip-hop recording artist and seven-time GRAMMY®winner TobyMac hit the road for his Hits Deep Tour, the production team knew that growing audiences and varying coverage demands would provide a challenge few loudspeaker systems could meet. Eastern Acoustic Works’ (EAW) worked directly with BlackHawk Audio in implementing its ADAPTive System for the tour, as it extends coverage and provides even front to back response in a physically compact system.

“The tour is a large and complicated audio deployment; the sound system has to be up and out of the way of the many video screens, yet still provide massive power and clarity to the audience,” says Rick Shimer owner of Blackhawk Audio. “We knew EAW’s ADAPTive could handle our needs and consistently deliver the coverage we needed regardless of the size or shape of the venue. The system has delivered and the sound that we are getting is amazing.” 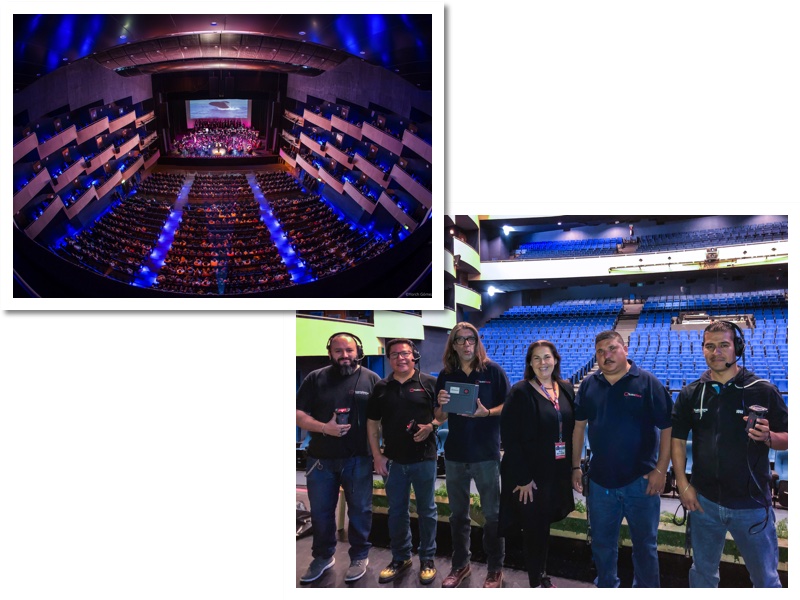 Riedel Communications today announced that Teatro Diana, a 2,400-seat theater in Guadalajara, Mexico, has chosen the occasion of its 15th anniversary to upgrade its entire communications infrastructure to Riedel’s Bolero stand-alone wireless intercom.
“Reliable intercom systems are critical for all of our live shows, including plays, concerts, conferences, and cinema screenings,” said Wolfgang Schmitz, Production Chief, Teatro Diana. “Bolero’s renowned audio quality, reliability, and flexibility attracted us from the beginning, and we could see Bolero would offer the easiest integration and most flexible programming capabilities. We know we can count on Bolero for events of all types and sizes.” 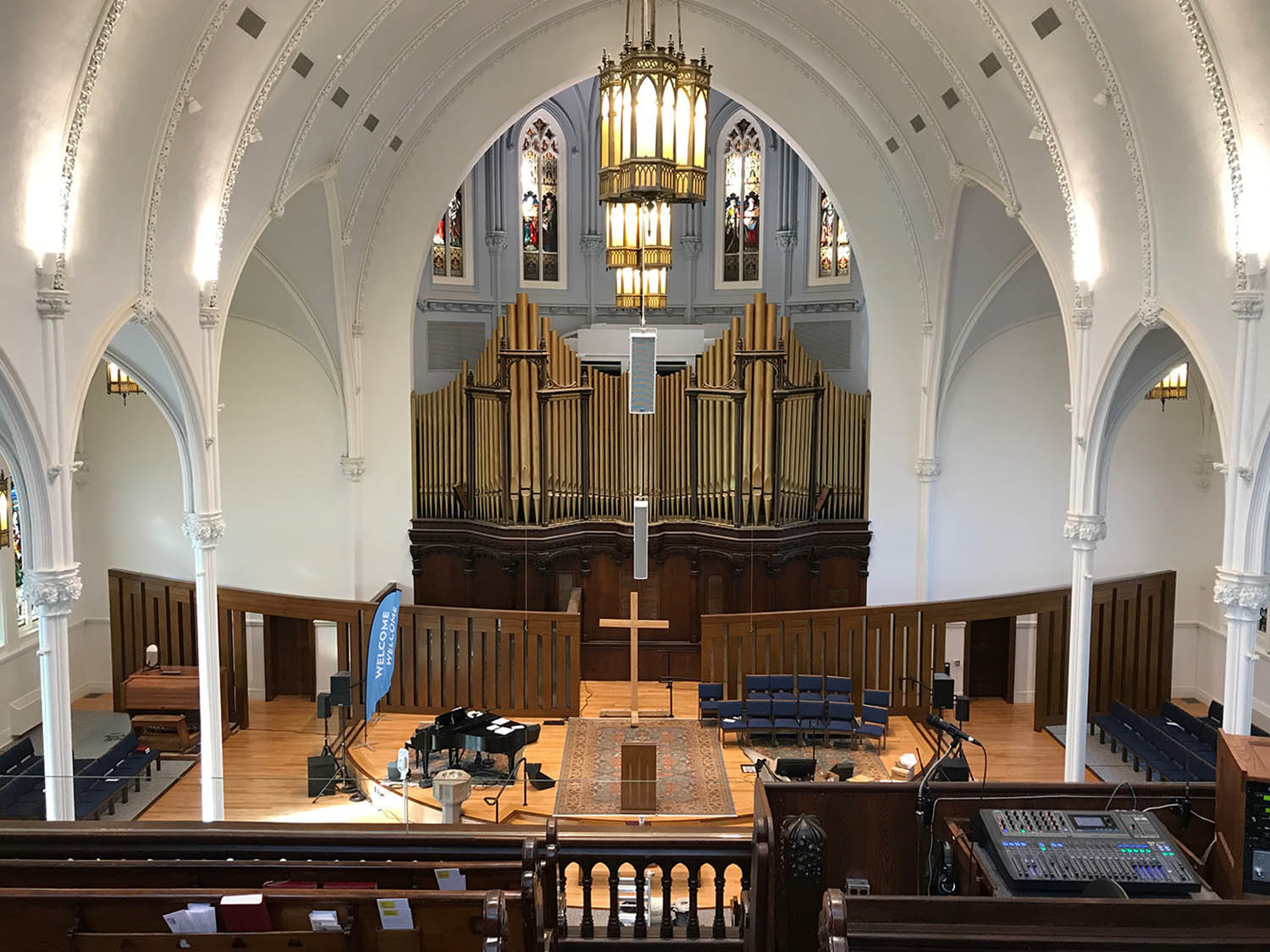 The history of Knox Presbyterian Church in Toronto, Ontario stretches back all the way to 1820, and it has been in its current building across the street from the University of Toronto since 1909. Its ornate, high-ceiling sanctuary accommodates 550 people and inspires congregants with its sublime beauty. Unfortunately, Knox’s sound reinforcement system was nowhere close to commensurate. Poor intelligibility was largely due to a renovation that radically changed the acoustic nature of the space rendering the previous system untenable. Couple that with a transition from traditional to contemporary music forms created the perfect storm that left the church with inarticulate sound. The AV integration department at local music store Sherwood recently changed all that with a new sound reinforcement system that leverages the exceptional pattern control of Danley Sound Labs SBH-Series loudspeakers. The new Danley system keeps energy off the walls and treats congregants to crystal-clear, point-source fidelity. 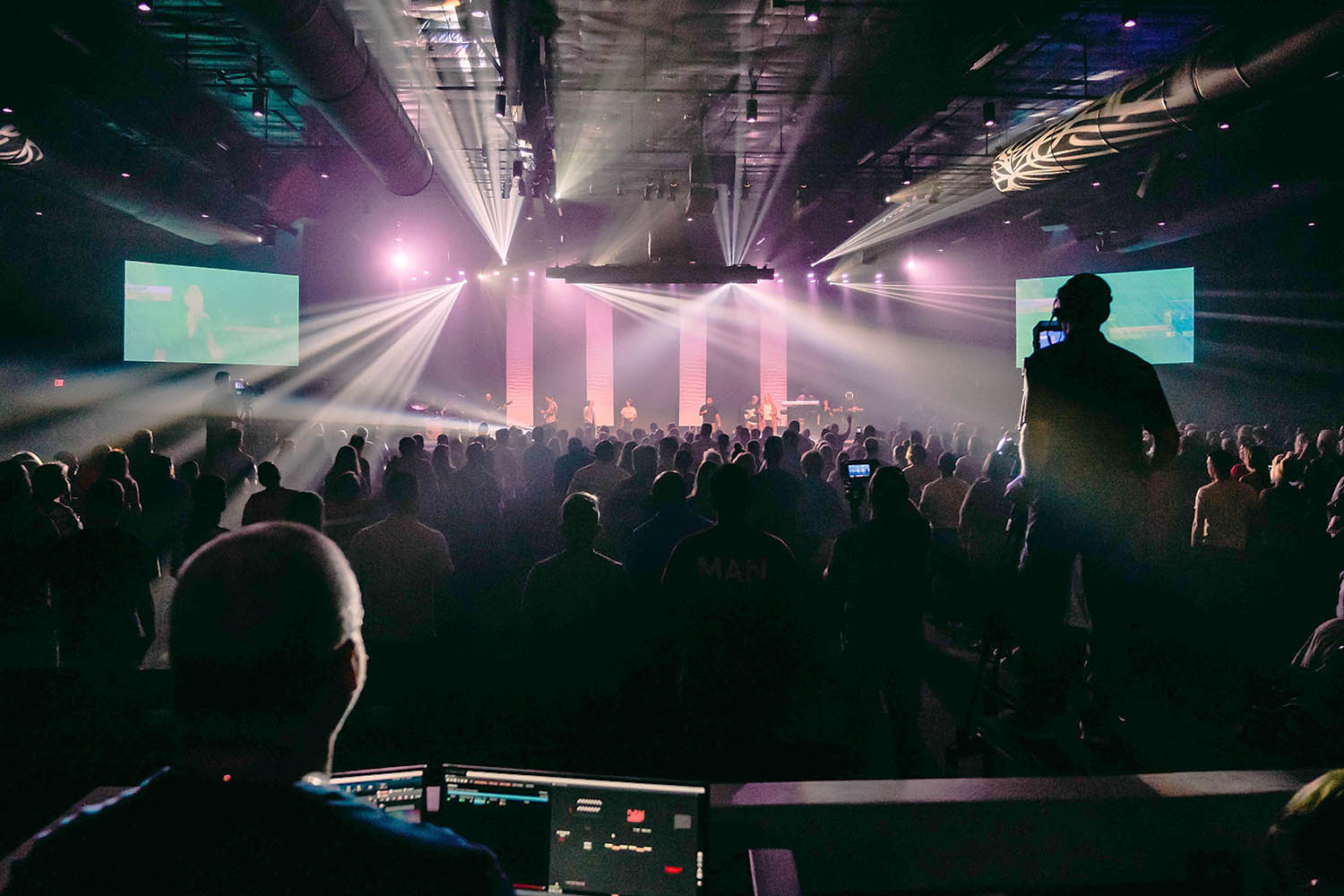 Now celebrating its twenty-sixth year, Grace Family Church started with just eighty people in a former jazzercise storefront next to a bar in Tampa, Florida. It has subsequently grown to over 12,000 members! To accommodate so many members, Grace Family Church operates satellite campuses. Its sixth campus opened in Land O’ Lakes, a suburb of Tampa, and AVL firm All Pro Integrated Systems, of Pensacola, Florida, helped design and install the AVL system there. Since many of the decision-makers at Grace Family Church had never heard a Danley Sound Labs system, All Pro arranged for a demo that proved persuasive. The now-finished system includes Danley’s patented point-source Synergy Horn loudspeaker technology, its patented Tapped Horn subwoofer technology, and seven Danley multi-channel amplifiers with built-in DSP and presets for every Danley loudspeaker and subwoofer. Perhaps in the spirit of its origins, the Land O’ Lakes campus is built into a former big box store… but instead of just eighty, it can accommodate 1,000 people! 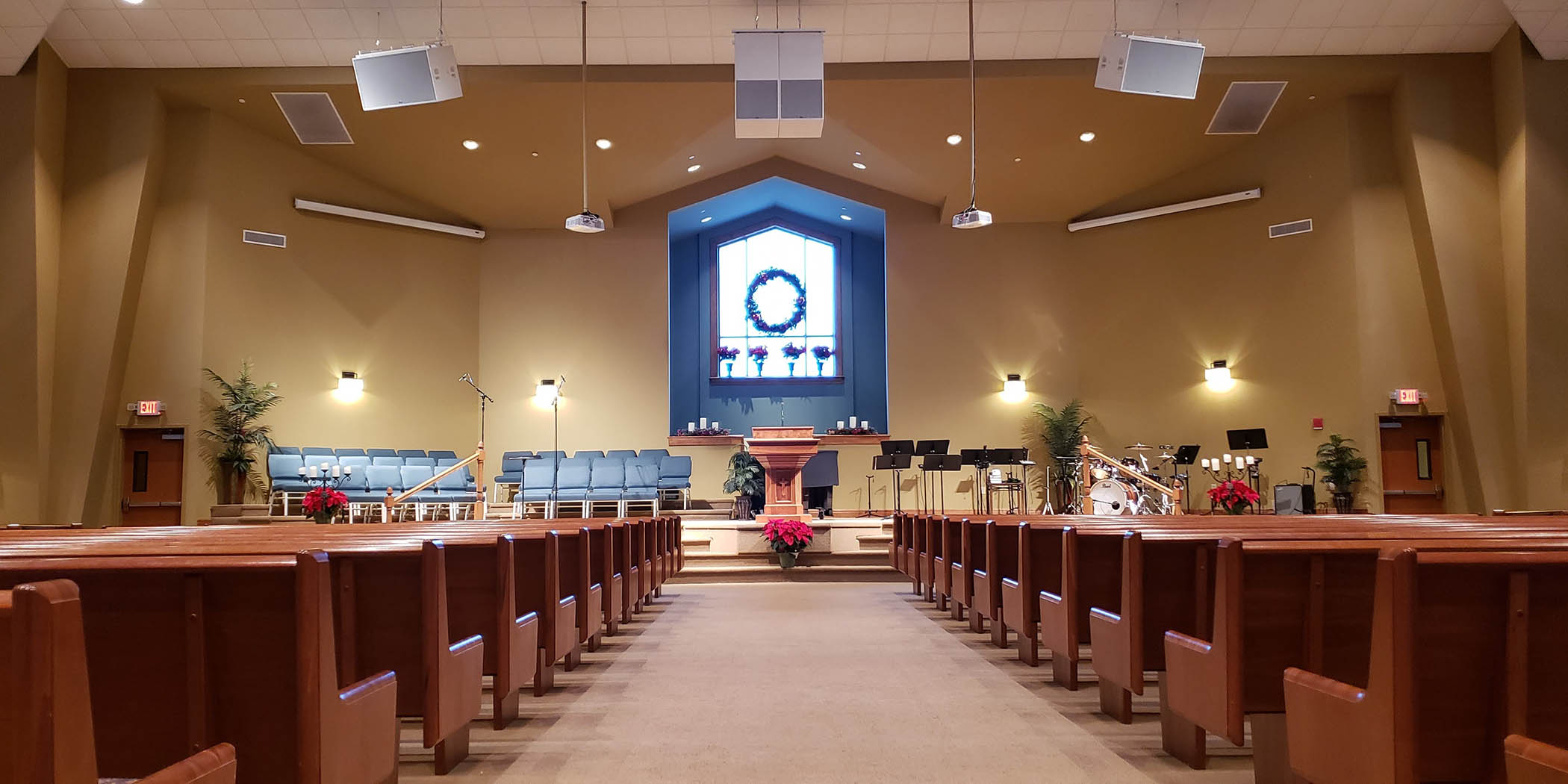 Summit Woods Baptist Church is a large but relatively young church in Lee’s Summit, Missouri. It moved into its first permanent sanctuary in 2004, a space that it had helped to design. Although most aspects of the 650-capacity, fan-shaped sanctuary (with room to expand to 1,000) were serving the congregation well, its acoustics and sound reinforcement were not. Their blended service style – everything from a contemporary band to choir to orchestral instruments – lacked the impact it deserved. Avoiding the expense, footprint, comb filtering, and destroyed sightlines of a line array, AV integration firm Advanced Sound & Communication, of Kansas City, Missouri, designed and installed a Danley Sound Labs system with excellent intelligibility, pattern control that minimizes the impact of the poor acoustics, and a small footprint that maintains a clear view of the video screens and stained glass windows from any pew. 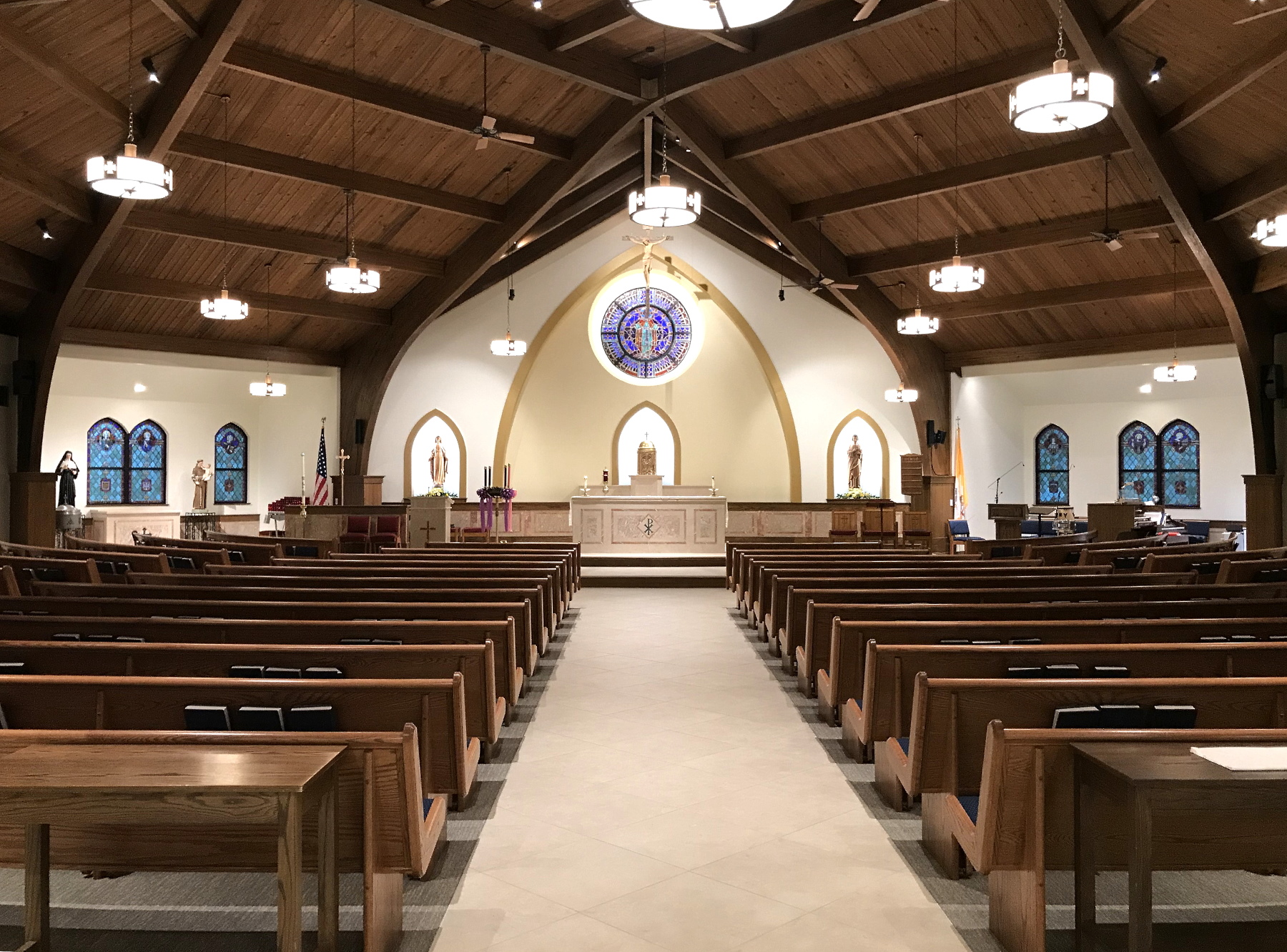 Pro audio and commercial video systems specialist, Sound Designs LLC, has completed the design and installation of a new sound system for the remodeled St. John Fisher Church in Boothwyn, Pennsylvania using Biamp’s Community loudspeakers.
Due to demographic changes in the area, the Archdiocese of Philadelphia consolidated three church congregations into one, with St. John Fisher chosen as the new central facility. The architectural planning and pre-construction review commenced early-2019. Construction and remodeling took just 6 months and the first Mass was held in the newly remodeled church in December. Although the church had ample seating, its layout was very 70’s in design.  Religious artifacts and stained glass were moved into the remodeled building, melding irreplaceable older architectural elements with newer lighting, seating and ambiance.

Riedel’s Artist digital matrix intercom and Bolero wireless intercom are at the core of a comprehensive event communications solution for the all-new International Swimming League (ISL). The integrated Artist/Bolero system enabled clear and highly reliable crew communications for the ISL’s inaugural season in 2019, culminating in December’s Grand Final at the Mandalay Bay Resort and Casino in Las Vegas.
The ISL has brought swimming to the world of professional sports, with male and female swimmers competing in teams rather than individually. Throughout 2019, the league conducted seven short-course swimming matches in cities around the world, with Energy Standard of France winning the first-ever ISL Championship at the Grand Final. 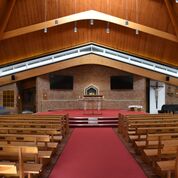 Old Barn Audio (OBA) recently turned to Martin Audio’s CDD series to overcome a challenging situation at the refurbished St. Joseph’s College Chapel in Ipswich. The majestic Ipswich chapel, forced to close for three years when it fell into disrepair, has finally been brought back to life after a major revamp costing £750,000. Written into the upgrade program was the provision for a new sound system.
The chapel itself belongs to the independent school, St. Joseph’s College, who approached OBA as the result of a recommendation.
OBA project manager Phil Clark’s first site visit revealed a pyramid shaped building, with no internal walls, and thus no fixing points, and a 196-foot high pitch. His solution was to install three clusters of three CDD8, pointing in each direction and carefully angled to suit the dispersion requirement. Two further CDD8 are positioned either side of the nave, while a slimline SX210 was of perfect dimension to be recessed under the stage, which bears the marble altar. 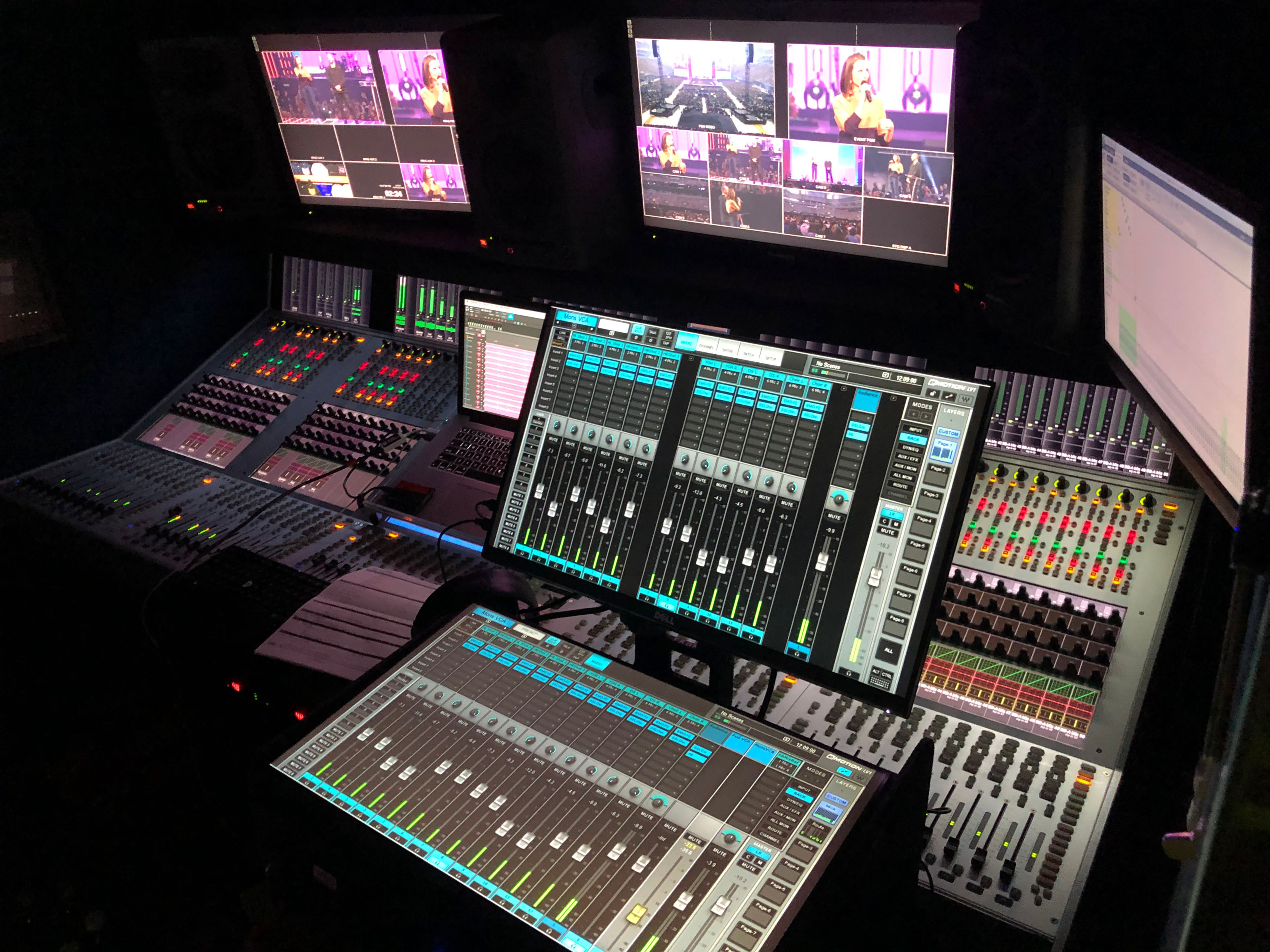 Passion’s lead audio engineer Stephen Bailey recently incorporated Waves eMotion LV1 Live Mixer and Waves SuperRack for the Passion 2020 Conference in Atlanta, an annual gathering of young adults between the ages of 18–25, which hosted over 65,000 attendees at the Mercedes Ben Stadium in Atlanta.
Bailey’s setup included a Waves eMotion LV1 Live Mixer, and a deployment of 10 Waves SoundGrid® recording systems for the three DiGiCo networks on site.
Bailey comments, “The DiGiCo systems were deployed in a festival configuration, with two artist loops and a production loop. Our primary recording system used a DiGiGrid MGR per each artist loop and a DiGiGrid MGB for the production loop, pulling audio and clock off the MADI Main outputs on each DiGiCo SD rack. Each DiGiGrid unit then hit its own NETGEAR ProSafe M4100-D12G 12-port Switch, which got the SoundGrid network onto single-mode fiber cable, and made its way about 100m outside, to one of the TV trucks where an engineer was managing our primary recording computers. The fiber routes were bookended by the same NETGEAR switches in the truck, where our engineer had three MacBook Pros running a Waves SuperRack SoundGrid host application to manage these networks. He had a DiGiGrid D on each network locally, to input monitor the audio from Waves’ Tracks Live DAW over headphones. We were also able to throw together rough mixes and output this from the DiGiGrid D to the truck speakers from Tracks Live, while recording in real time to make sure that what we were recording was clean, and also so the producers from the record label could determine if any changes from stage were needed. Our primary recording engineer was also archiving the recorded files and uploading them to Dropbox with a dedicated uplink computer, so after each session of the conference our film and other creative teams could immediately access and pull down audio to use for various exported content without having to ask our audio team.”