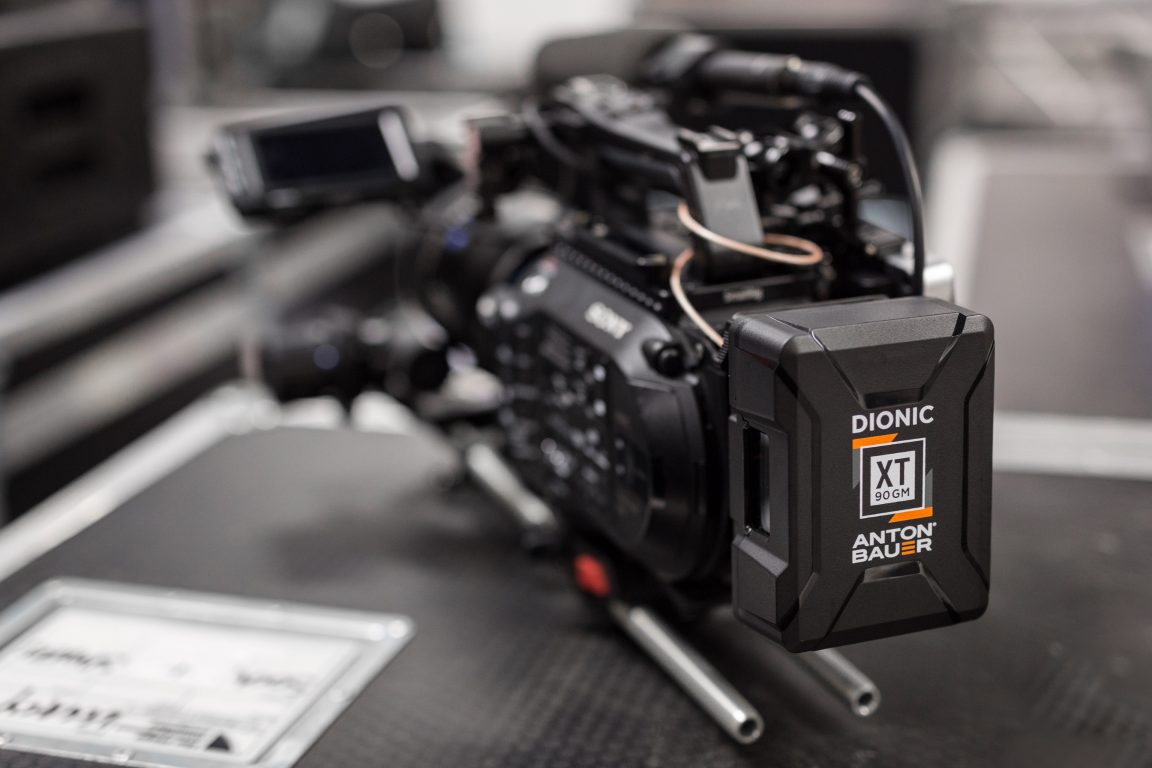 The new Dionic XT line of highly dependable, long-lasting, and rugged batteries will be shown in Europe for the first time at IBC2018. Dionic XT is the newest generation of Anton/Bauer’s highly popular Dionic battery series for broadcast and 14.4V cinema applications. Available in both V-Mount and Gold Mount, the high-performing and compact Dionic XT is a 14V Li-Ion battery capable of delivering up to 12A of continuous power for cinematographers, broadcasters, rental houses, and other customers for whom battery performance and reliability are essential.

Available in two models — the Dionic XT90 and the Dionic XT150 — the Dionic series features ultra-high-strength ABS and rubber construction that cushions and protects the battery and ensures industry-standard performance even in the most demanding conditions, including extreme heat, humidity, and cold. Dionic XT’s superior cell technology is engineered for maximum cycle life, enabling the battery to be recharged many more times than competing batteries for superior ROI and the lowest management overhead. Dionic XT batteries not only work with Anton/Bauer’s complete line of battery charging systems, but they are also cross-compatible with competing brands’ charging systems and offer superior performance for powering accessories such as portable LED lighting.

“Our new Dionic XT will be making its European debut in Amsterdam, and we could not be more pleased with this groundbreaking new lineup offering superior ROI, battery performance, and reliability. Available in both V-Mount and Gold Mount formats, Dionic XT gives customers around the world the ability to leverage the industry’s most powerful on-board battery management system, regardless of their choice of camera mount. With Dionic XT, camera operators can have the confidence to go further and work longer in their quest to capture and deliver exceptional images from even the most extreme outdoor locations.”

At IBC2018, Litepanels will showcase the latest firmware update for Gemini, the industry’s most accurate and versatile 2×1 soft panel. Gemini eliminates the need for color correction by offering full-spectrum white light that’s perfect for lighting talent and rendering exceptional color. Lighting professionals can “go bold” by lighting with any color in the 360-degree color wheel and popular gels within Gemini’s color modes. Introduced at IBC2017, Gemini has been updated through the new firmware to provide a wider variety of cinematic effects — such as emergency lights, fire, TV, and hue bursts — that are fully customizable and that can be easily saved to presets.

Gemini’s versatile, ballast-free, lightweight design allows the light to be rigged more easily, requiring fewer cables because the power supply is built-in. The production-friendly soft panel can also deliver full-intensity output when powered by batteries such as the Anton/Bauer CINE VCLX battery.

“At IBC2018, we’ll be showcasing a variety of Litepanels’ award-winning solutions, including our Gemini, Astra, and Sola lighting ranges. The flicker-free, precise Gemini LED panel is both lightweight and highly portable, which means it can be mounted virtually anywhere — giving cinematographers and lighting directors the flexibility they need to light even the most difficult of scenes.”

flowtech™ is a carbon-fibre tripod featuring the world’s fastest-deploying legs, unique quick-release brakes, and easily adjustable levers for quick and easy setup in any type of remote production environment. At IBC2018, Sachtler and Vinten will showcase flowtech technology with the flowtech 75 tripod, compatible with all major 75-millimeter fluid heads.

flowtech offers a set of two-stage legs with an easy-to-remove midlevel spreader, rubber feet, and a payload capacity of 20 kilograms (44 pounds). The quick-release brakes enable legs to be deployed simultaneously and adjust automatically to the ground’s surface, saving operators from bending over and manually adjusting multiple brakes on each leg. A unique hinge-lock mechanism allows users to capture extremely low, ground-level shots, removing the need for extra “baby legs.” Lightweight and easy to transport, flowtech 75 can be carried comfortably on the camera operator’s shoulder, with magnetic locks keeping the legs stable during transport.

“Unquestionably, our flowtech tripod has been a huge success around the world since its official introduction at last year’s IBC show, and the current demand for the multiple award-winning tripod is beyond impressive. We are also very excited to say that visitors to our booth will have their first chance to experience the next part of the flowtech tripod revolution.”

Teleprompting leader Autoscript will showcase developments to its Intelligent Prompting range, the industry’s first teleprompting system designed around an IP-enabled workflow that can also accommodate video workflows. These developments will include additional features within Autoscript’s premier prompting software, WinPlus-IP, that build even greater redundancy and reliability into Intelligent Prompting workflows.

Also new to the show will be the IPS range, including EVO-IPS, the world’s first all-IP prompting monitor, and WinPlus-IPS software, a simple but powerful prompting application for smaller productions. The combination of WinPlus-IPS and EVO-IPS packages the power of Intelligent Prompting into a cost-effective, easy-to-install, and easy-to-use solution that’s perfect for smaller IP-based studios as well as corporate, educational, and government productions.

“Teleprompting is a critical element to a broadcast production workflow, but it’s one that is often taken for granted until it doesn’t work! As the IP revolution continues to transform the way we deliver content, prompting solutions must be smooth, reliable, and, of course, compatible within an all-IP production. We are looking forward to showcasing our new IPS range of prompting solutions at IBC2018 and highlighting the IP and video workflows that have been newly adopted by our customers with Intelligent Prompting.”

Vinten: New Robotic Ceiling Tracks
At IBC2018, Vinten will highlight its ceiling track system together with its renowned pedestals and height drives. A collaboration between Vinten Automation and veteran dolly manufacturer Tecnopoint, the Vinten ceiling track system is designed for creative productions in which floor space is at a premium.

The dolly, motorized column, and robotic head of the ceiling tracks system work in tandem with the Vinten control protocol and can be fully managed from the Vinten robotic control system (VRC) to create a powerful studio robotic solution that fully integrates with all Vinten robotic camera supports. The track system supports shot sequencing, allowing users to select multiple shots and execute a seamless move through multiple key frames, while an absolute encoder outputs tracking data to the VRC, making the system ready for use in an augmented reality or virtual reality environment.

“Our award-winning lineup of robotic camera supports, including our ceiling track systems, will be featured through on-set demonstrations at IBC2018. Working in tandem, these systems offer a complete, state-of-the-art robotic solution for any broadcast studio, rental house, or on-location event.  At Vinten, we strive to make camera operations effortless, which, in turn, enables our customers to focus on what they do best: creating and capturing content.”

More information can be found at: www.vitecgroup.com.