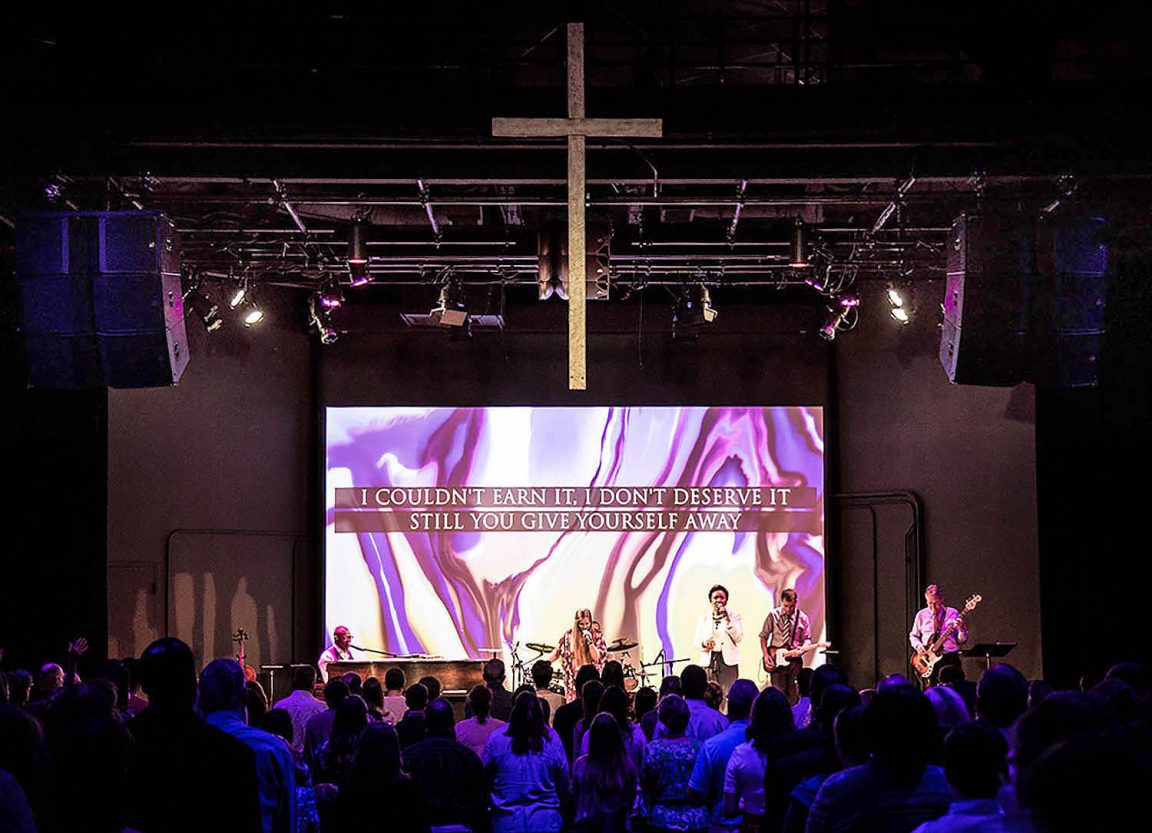 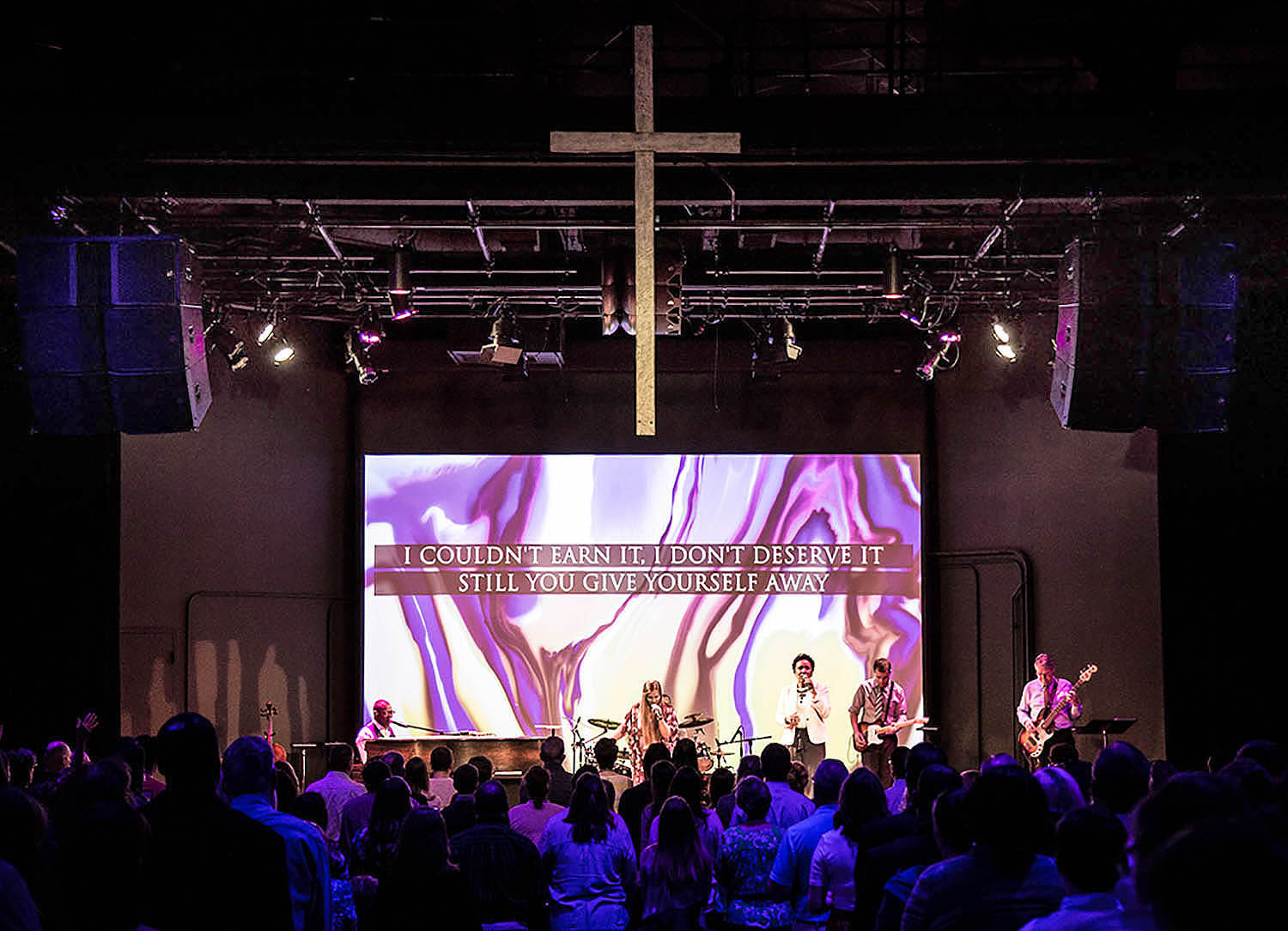 The snow kept falling and falling. And falling. Reaching two feet, the weight of the snow was too much for the roof to bear at Calvary Fellowship. Ruptured pipes irreparably flooded the 1,100-seat sanctuary at a cost of over a million dollars in damage. “Luckily nobody was hurt,” says a thankful Lee Wiggins, head pastor at the church.

The renovation was major, and it changed the physical design of the space. Improvements were made at all levels, which rendered the budget to complete important final details relatively low. “Money was an issue but we all felt we still needed to offer our congregation the best possible worship experience, especially the level of quality of the audio production that delivers our sermons,” points out Pastor Lee. So, who got the call? “Clair Brothers, of course,” he says with a smile. “And it was the right decision.”

Clair Brothers was faced with a number of challenges in their effort to deliver a full-frequency PA sound system that wouldn’t take up floor space but had to fit architecturally while also not interrupting the space’s new lighting and video projection systems. “Our toughest challenge was figuring out how to overcome the washed up sound common in many churches, where the audio waves underneath the low balcony ceiling get lost,” explains Josh Sadd, chief design engineer at Clair Brothers. “It’s not enjoyable for the people sitting in those seats.”

The physical and budgetary limitations required Clair Brothers to work through multiple possible speaker combinations to achieve the most effective solution to meet their client’s needs. In a perfect world, the PA would consist of a line array of eight-inch speakers and separate subwoofers in different areas, such as behind the array, alongside it and in the center, and possibly subwoofers on the ground. But the cost would have been too high. Amid such constraints, Clair Brothers began to deduce a solution that pointed toward using a system with a more full-range, larger format PA, but using a smaller quantity. The idea being to scale the sound system by quantity without compromising low-frequency subwoofer size. The Clair Brothers team decided the best equipment to meet the challenge was to install three of its signature i218s per side as the main PA, which would act as the left/right PA and transmit the low-end sound of a subwoofer. Two kiTCurve12 cabinets were installed as the center cluster, performing as front fills to attain the most effective vocal imaging in the front.

The stage positioned in the corner conveys a baseball diamond-like configuration, which meant Clair Brothers had to work with a wide, yet long, distance within the church’s space. The logical solution then was to aim the PA in a way that covered the entire room, including the seats beneath the balcony. The result is a balanced sound that plays to all parishioners, on the main floor, up in the balcony and underneath. The speaker configuration also focuses the sonic image to the person speaking onstage.

All told, the system only consists of i218s and kiTCurve12s – a total of eleven speaker boxes. With this bold approach, Clair Brothers saved Calvary Fellowship not only thousands in costs but also on amp channels. This meant reduced install costs with less wire to pull and significantly fewer labor hours. Rob Barr, production coordinator at Calvary Fellowship points out: “This new arrangement works on every level. It covers the entire space with full frequency range. Another great benefit is that this speaker system is designed to grow as our church grows.” Adds Pastor Lee: “Getting the sound right under that balcony was a big deal! We knew Clair Brothers could pull it off, and they did. If there’s a silver lining to the catastrophic roof collapse it’s that our church is now better than ever, and what Clair Brothers achieved is spectacular. Other churches would be wise to give them a call when the time comes for a new PA system.”

In general, today’s churches are changing. They aren’t always built following traditional chapel design. Some are in steel buildings and retail commercial spaces with bar joist beam structures. These new lower cost spaces present new audio challenges. Even though sometimes weight capacity can be a challenge, utilizing larger PA systems with fewer cabinets is a more viable business decision for churches. The end result is a higher power density in relation to the number of speaker components and wattage within a defined space, especially in cases where the main ceiling is low. Clair Brothers has figured out that depending on the number of speaker components per foot of height, they can achieve much higher power densities and much cleaner acoustical solutions because all of the sound is coming from one source. This in contrast to most of the sound coming from one line array with subwoofers beneath the stage, which can result in a buildup of too much low-end bass in the front few rows and not enough in the back of the room. It’s especially true within the parameters of these new church designs, where the path of sound, depending on where you’re sitting, reaches different parts of the space at different times because of distance. It’s inconsistent at best. With this new single source configuration, the result is a much more coherent sound.