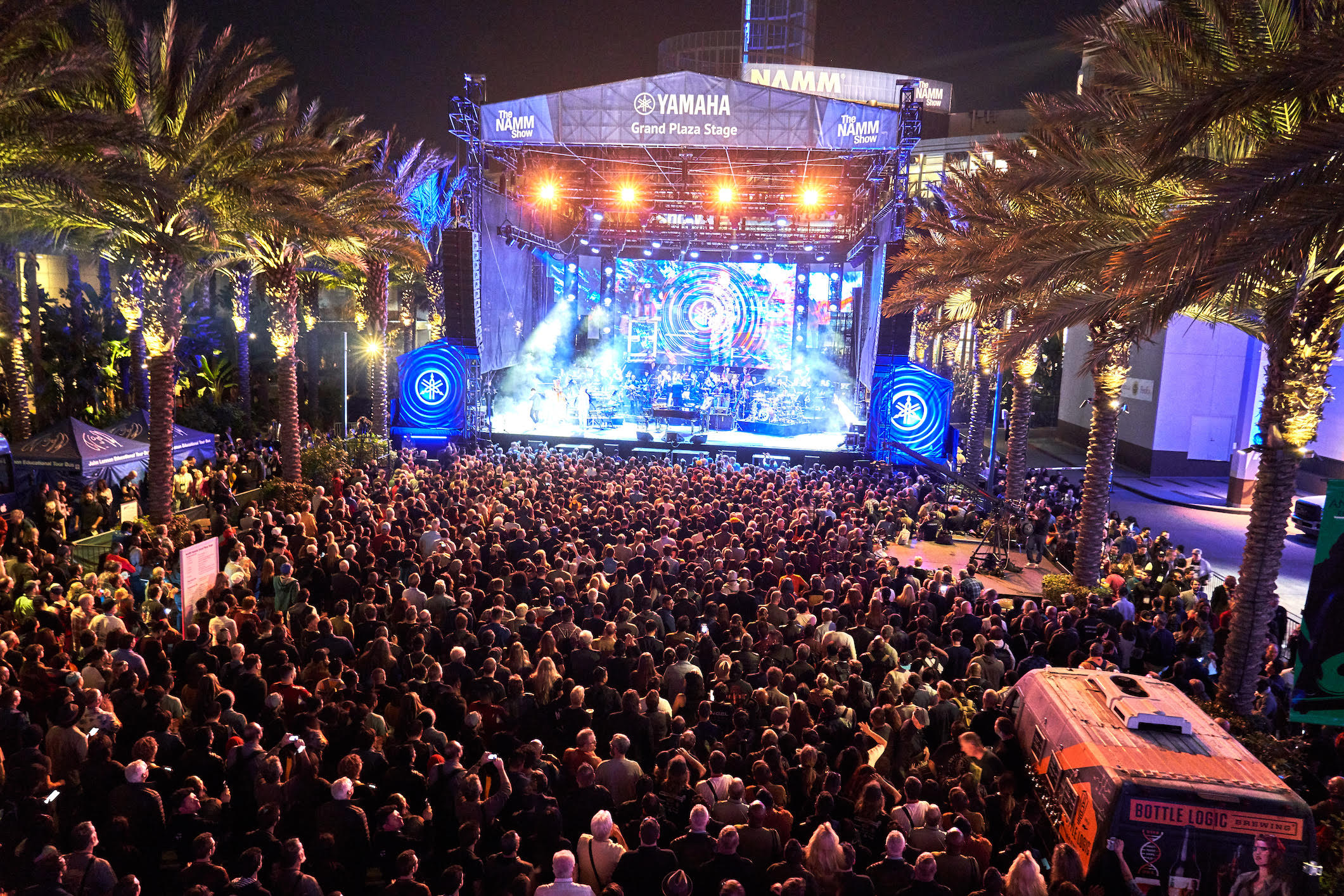 Yamaha will be presenting three major concert events on the NAMM Yamaha Grand Plaza Stage at the 2020 NAMM Show, to be held January 16-19, 2020 in Anaheim, California.
This year marks the first NAMM Show in which Yamaha will be presenting every major event on the Grand Plaza stage. These productions will include the blockbuster main event of the weekend, and all three will feature superstar-caliber artists, among them multiple GRAMMY® honorees.

The stage itself will be situated outdoors on the opulent Anaheim Convention Center Grand Plaza, between the Anaheim Marriott and Hilton Anaheim hotels. The Grand Plaza concerts will dazzle the audience with wall-to-wall visual and multimedia effects over the course of the weekend.

Beginning at 6 p.m. on Thursday, January 16 will be the “NAMM Foundation Celebration for Music Education,” featuring three-time GRAMMY-winning singer and songwriter Sarah McLachlan. The concert is a salute to musicians and music lovers who devote themselves to nurturing and motivating budding musicians as teachers, mentors and advocates, as well as those who inspire by example on stages large and small.

On Friday, January 17 at 6 p.m. Yamaha will present the premier event of NAMM, the “Yamaha All-Star Concert on the Grand 2020,” a multi-artist, multimedia spectacular for all attendees. The Concert on the Grand has built a lasting reputation as the big draw among NAMM events every year. While the coming roster of featured acts is still under wraps, every year some of the finest Yamaha Artists gather under the spotlights for a pulsing, energetic performance. Past performers have included such luminaries as Elton John, Stevie Wonder, Tony Bennett, John Legend, Earth, Wind & Fire, U2 founder and drummer Larry Mullen, Jr., and many others.

The weekend’s festivities on the Grand Plaza Stage will culminate on Saturday, January 18 at 6 p.m. when Yamaha presents the “Tower of Power 50th Anniversary Concert.” The event will be a celebration of a half-century of inspiring musical achievement from dynamic soul/funk/R&B ensemble Tower of Power as they treat NAMM attendees to a retrospective of decades of groundbreaking music. The playlist will run all the way through to the present day with selections from their powerful new disc, Soul Side of Town, the band’s very first Billboard No. 1 album. Tower of Power has enjoyed a place on the Yamaha Artist roster during its entire 50-year existence as a band.

Yamaha commercial audio systems will power every aspect of the Grand Plaza Stage during NAMM. NEXO loudspeaker systems will deliver a 360-degree audio experience through its flagship, high-output modular STM system, with dozens of speakers used in the main arrays, as downfills and in front of and behind the stage. Sending signals from the front-of-house and monitor positions will be the Yamaha RIVAGE PM10 digital mixing consoles, the same systems used worldwide on national and regional concert tours, at festivals, in houses of worship and other diverse live and installed sound system applications.

“This year’s Yamaha concert events will ignite passions and touch hearts in ways that will last long after the final notes are played,” said seven-time Emmy award-winning producer Chris Gero, chief artist relations executive, Yamaha Artist Relations Group/Yamaha Entertainment Group. “A music lover of any age will find something to grab on to and remember from this year’s show, possibly even going on to play some formative part in their own musical journey.”

For more information, please visit the Yamaha booth at the 2020 NAMM Show in the Anaheim Marriott Hotel, Marquis Ballroom, January 16-19, 2020.