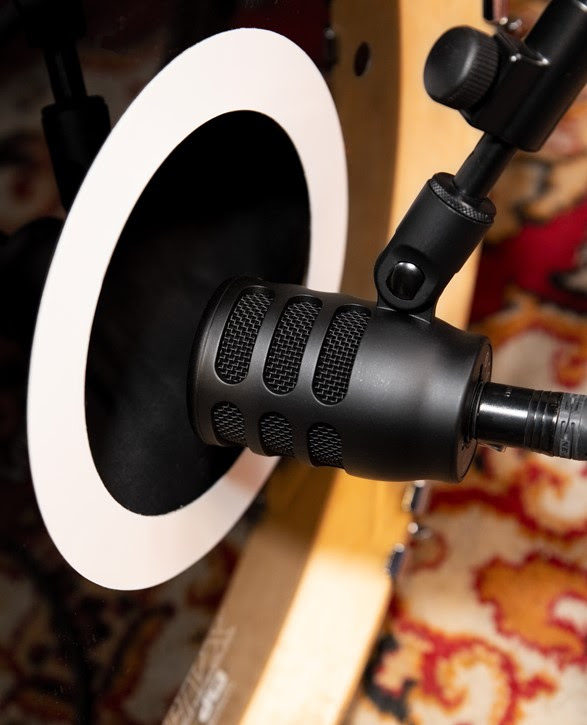 Beyerdynamic has just added two new microphones to its Touring Gear (TG) series. The dynamic kick-drum microphone TG D70 and the instrument microphone TG I51 make their mark with their clear sound spectrum and their robust design. Both microphones are manufactured with high-quality materials at the company’s manufacturing facility in Heilbronn, Germany. Each microphone has a tough die-cast zinc housing and compact design, features that enable them to excel in both the studio and on stage. beyerdynamic invited Jost Nickel, the drummer for the funk and pop band Jan Delay & Disko No. 1, to become the first musician to put the new microphones to the test during a recording session at the company’s studio in Germany.

Unbeatable on the kick drum: the TG D70
The second generation of the TG D70 is the specialist among drum microphones. The large diaphragm microphone was designed specifically to record the kick drum in action. With this microphone’s help, recordings can be made quickly and easily. The TG D70 is compact and can fit into every hole on a typical kick drum as a result. The microphone can also be set up on a cajón and bass guitar amplifiers to optimally record the instruments’ sound.

An array of usage options on instruments: the TG I51

The jack-of-all-trades TG I51 brings out the best in every instrument – from snare and tom drums to electric guitar amplifiers and brass instruments. The microphone amazes users with its remarkable sound quality. This lean microphone with the short shaft is a snap to attach to the stand or a snare drum with the help of beyerdynamic’s highly popular microphone holder MKV 87. The microphone enhances the toolbox used by producers and sound engineers while making their lives much easier.

The legendary M88 capsule takes on a new shape
The refinement of beyerdynamic’s world-famous M88 capsule in the second generation of the TG D70 takes sound quality to a level never dreamed of by its predecessor model. The capsule system has elastic suspension, a feature that prevents impacts from the floor from being transmitted through the stand. The legendary microphone capsule distinguishes itself with natural, crystal-clear sound.

Precision in loud environments
The hypercardioid features of the TG D70 provide good isolation from ambient noises and prevent acoustic feedback. The microphone completely suppresses rear sound and captures side sound ever so softly. These features make this dynamic microphone the perfect choice for drum recordings in loud environments like live concerts.

Star drummer is the first to use it
“This microphone perfectly reproduces my sound,” Jost Nickel, the long-time drummer of Jan Delay & Disko No. 1., said during a recording session at beyerdynamic’s studio in Heilbronn. Celebrated as one of Germany’s most polished drummers, Nickel can also be heard on songs performed by such German stars as Sasha, SEEED and Johannes Oerding. Thanks to the long-time partnership between the Berlin native and beyerdynamic, several songs were recorded with the new microphones. You can see and hear the exclusive recording session in this video.

Availability and prices
The TG D70 and the TG I51 are now available exclusively at Sweetwater Sound for retail price of $249.00 and $129.00. Both microphones come with an integrated clip and bag.