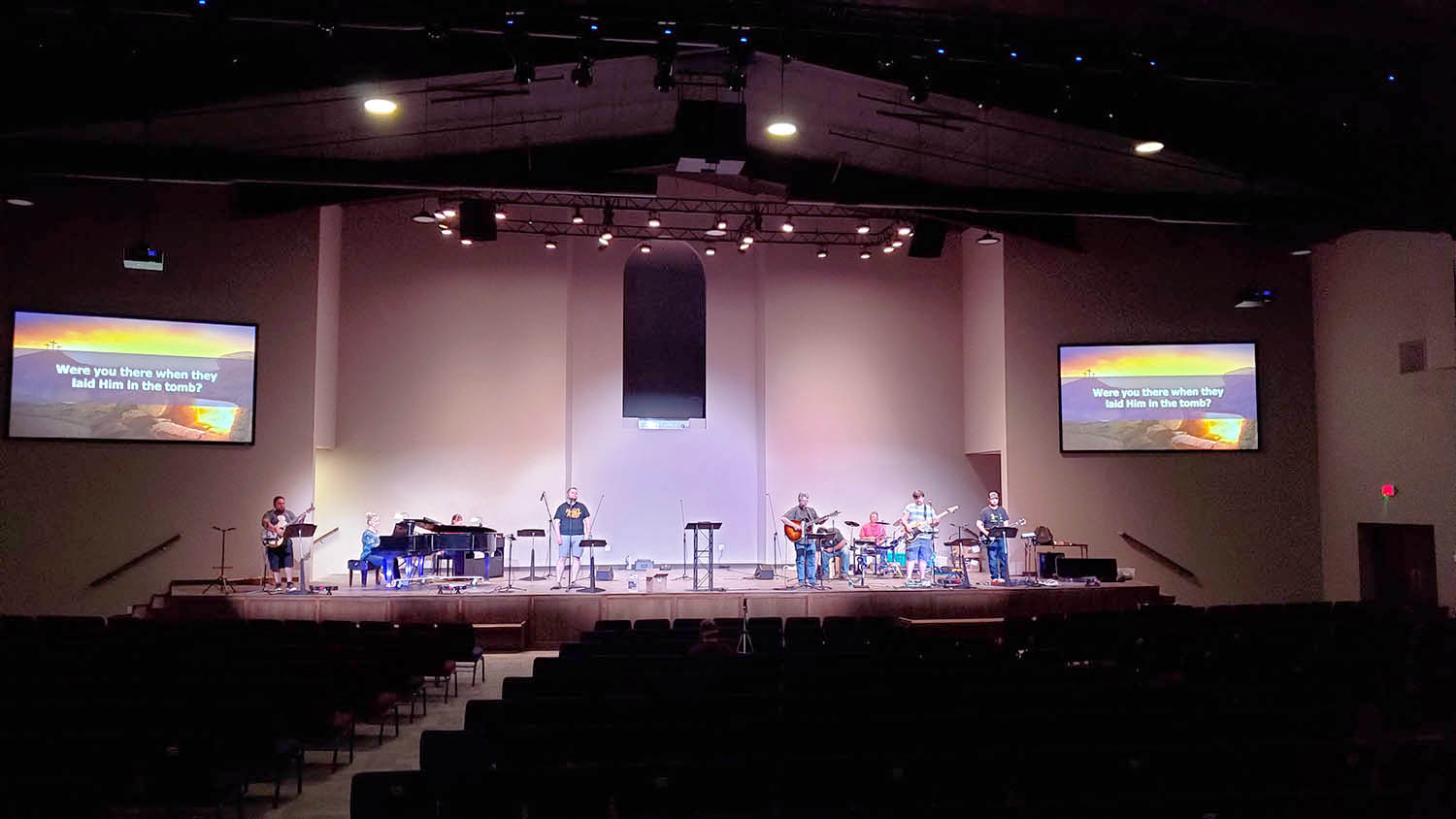 Although its original building was lovely to look at, First Baptist Church of Cushing in Cushing, Oklahoma was faced with the wonderful problem of having outgrown its sanctuary. The church raised money for a new building that would preserve the charms of its original building while improving on its function and expanding seating capacity to 750. They hired local integration firm Beasley Technology and its sister company, AVL specialists, Hart Designs, to handle everything from security to sound reinforcement. Although the original design involved a different loudspeaker manufacturer, the Beasley-Hart team experienced a revelatory Danley Sound Labs demo before anything was committed and immediately switched the project over to Danley, much to everyone’s delight.

“First Baptist Church of Cushing’s new sanctuary is approximately ninety feet by ninety feet with a thirty-two-foot peak,” explained Doug Hart, owner of Hart Designs. “Their service style is contemporary, with a full band, but they keep the volume under control, in part because the congregation is a mix from very young to old. They wanted a sound system with great intelligibility and impact. I had been hearing good things about Danley for a long time, but it wasn’t until I was on vacation with my family in Silver Dollar City and caught a show at the Opera House that I heard Danley boxes for myself. The show sounded fantastic! When I got back home, I arranged a Danley demo in a local theater that Geoff Beasley is restoring. Kim Comeaux of Anderson Sales and Marketing drove eight hours round trip for the demo and Geoff and I, along with all of our audiophile friends, were totally blown away. They were the best speakers we had ever heard!”

The team suggested a switch to Danley at First Baptist Church of Cushing, but the church wanted some proof that the idea was a good one. Comeaux again made an eight-hour, round trip to demo Danley boxes for the church members. “It only took them five minutes to unanimously and enthusiastically agree that Danley was the best choice,” Hart said. “So, Kim drove eight hours for what turned out to be five minutes of work!” The installed system is beautifully straightforward: just a stereo pair of high-output Danley SM80 full-range loudspeakers with a pair of Danley TH115 subwoofers flown together on the midline of the room. A single four-channel Danley DNA 10k4 Pro amplifier, with integrated processing, powers the system. Hart used the built-in presets for the SM80 and TH115 as a reasonable starting point during system tuning.

“At the beginning of the project, I told the church that their square room with flat walls would likely need acoustic treatment to sound reasonable,” Hart said. “Even after the chairs went in, the decay time was around two seconds with a fair amount of slap back. However, I wasn’t counting on Danley’s patented point-source technology and pattern control, which keeps a lot more energy off the walls than conventional loudspeaker designs can manage. I’m impressed by how intelligible and clear the system sounds even without treatment!”

A Behringer x32 console provides an intuitive user interface, and a dozen inset stage boxes give the church plenty of options, including outputs for Behringer Powerplay P16 personal monitors. Outputs for powered wedges also exist, should the church decide they need them. Some of the stage boxes also include DMX512 jacks for up-lighting and haze machines. Blizzard LB Par Hex LEDs provide down-, side-, and back-light, and Blizzard ellipsoidals, moving lights, and moving spots, all controlled by a Pathway Connectivity Cognito2 lighting console, give First Baptist Church of Cushing a compelling aesthetic. The video system includes three JVC PTZ cameras at left, center, and right to capture everything that’s happening on the large 65-foot stage. A Blackmagic ATEM Television Studio Pro HD console gives the church’s technicians complete control of the three cameras and an EasyWorship computer feed. Outputs include a Facebook Live feed and video distribution to the lobby and classrooms.

“When we were tuning the system, their sound guy came in and asked if we had had a chance to EQ the drums,” Hart said. “They were using a Yamaha electronic kit, and he wasn’t super happy with the way it had sounded in the old sanctuary. I explained that, no, I hadn’t gotten to that yet, but since the drummer was on stage playing, I unmuted the drums. The sound engineer looked at me and gave me an awestruck ‘wow!’ They sounded incredible, even without equalization. As we went through the rest of the system, we got a lot of compliments. No one had ever heard a system that sounded so clear! Whereas they were trying to run around 85dB in the old sanctuary, they’re now able to run around 92dB. Danley’s clarity makes all the difference!
www.danleysoundlabs.com