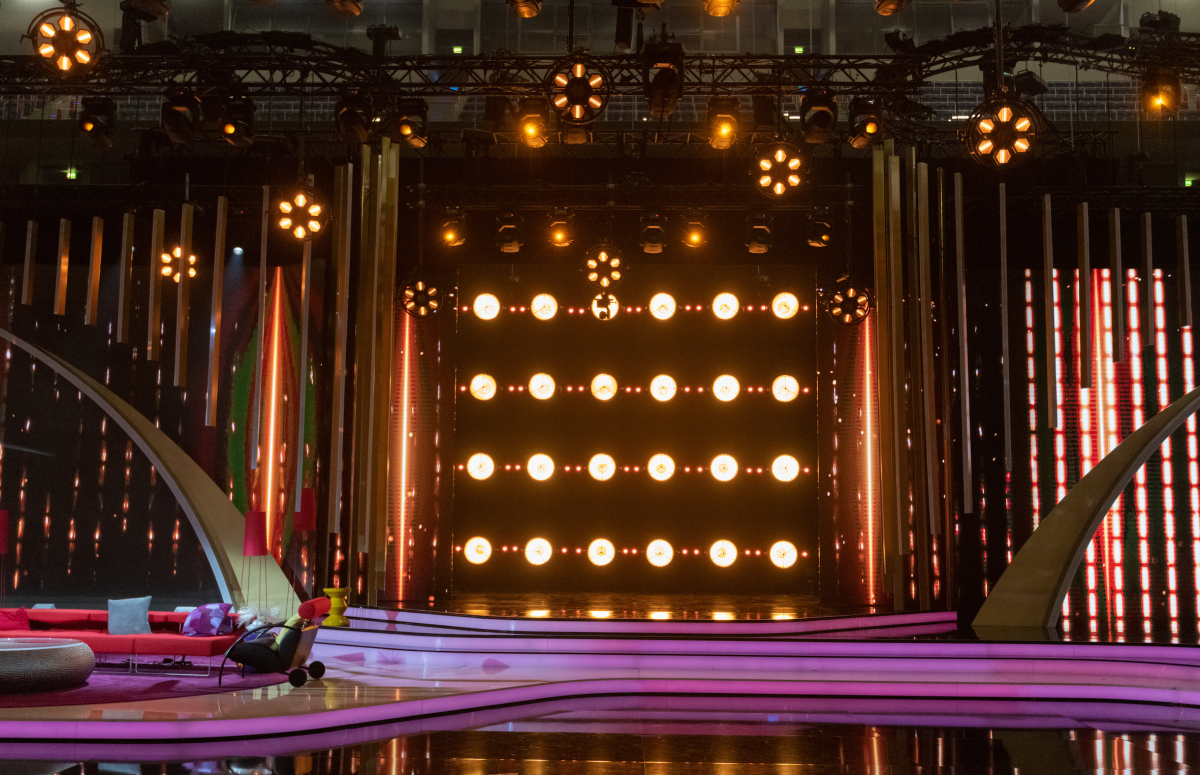 The 80s … who doesn’t like remembering that decade? From a fashion perspective, it may not have sparkled, but musically the 80s undoubtedly had a lot to offer.

Thomas Gottschalk, who once again gathered a who’s who of 80’s cult stars at the TUI Arena in Hannover for Gottschalk’s Big 80s Show, also clearly thinks that. Performances by Kim Wilde, Paul Young, Thomas Anders, Marc Almond and many more could be experienced on the set’s four show stages, with the concert broadcast by ZDF.Lighting cameraman / gaffer for the production was Michael Donecker. Frank Hofmann — better known as FH — from Scan Design Berlin was responsible for the show lighting design of a production that lasted for several hours. FH, who developed a penchant for lighting design early in life, today works predominantly for TV productions. He was clear from the outset exactly what requirements this special show would place on the production lighting design. “As the name implies, this was about the 80s and everything that made this time so exciting,” he said. “Therefore, I wanted to create a vintage look that could be interpreted in a modern way … that is, to imitate the looks of those days but using modern technology.”

The set itself was dominated by video elements. A huge LED display of ​​approx. 60 metres in width and six metres in height gave the stage an extremely flexible visual design. In the centre were two movable LED screens, which parted to allow artists and guests to emerge and perform on stage.

48 KNV Dot in a shimmering matrix

To make the show as glamorous and, above all, as varied as possible FH decided to install a matrix of 48 (4×12) GLP KNV Dot. The KNV system had attracted the attention of the designer from an early stage, but initially he could not envisage any application possibilities for the larger KNV Arc or Cube modules. That changed abruptly when Michael Feldmann from GLP presented the new, compact KNV Dot at a trade show.”I used to think that the KNV system was more for the EDM genre, with its crashing lighting,” he admits. “But with the KNV Dot, I could see immediately that it was very nice and soft, adaptable to the music and the occasion. I knew different moods could be generated—and of course I wanted to try that.”In the end, working with the Dots was a lot of fun, he said. “The Dots are enormously versatile. On the one hand I could work with different colors from the LED ring, on the other hand I could create very nice backlight effects with KNV’s typical ultra-bright, high power LED in the middle.”

From Zero to Hero

However, the special attraction for FH lay elsewhere, as the designer explains: “What I like about the Dots in particular, is that the lamp in the ‘off’ state, set against black areas, is initially completely invisible. Then suddenly this light comes flying out of nowhere. I love to work with effects that are not immediately accessible to the audience. The technical aspect should ideally always be completely concealed in the background, and that is one of the successes of the KNV Dot.”

FH can now imagine working with the KNV Dots again on future productions. “I will definitely use it again in larger numbers,” he promises. “After my experience with the Dots, the Arc modules would also be interesting, for instance if it was a question of tracing large lettering or something similar.”In addition to the KNV Dot, large quantities of other GLP classics, such as the GT-1, impression X4 and X4 Bar, also played an important role in the show’s lighting design.