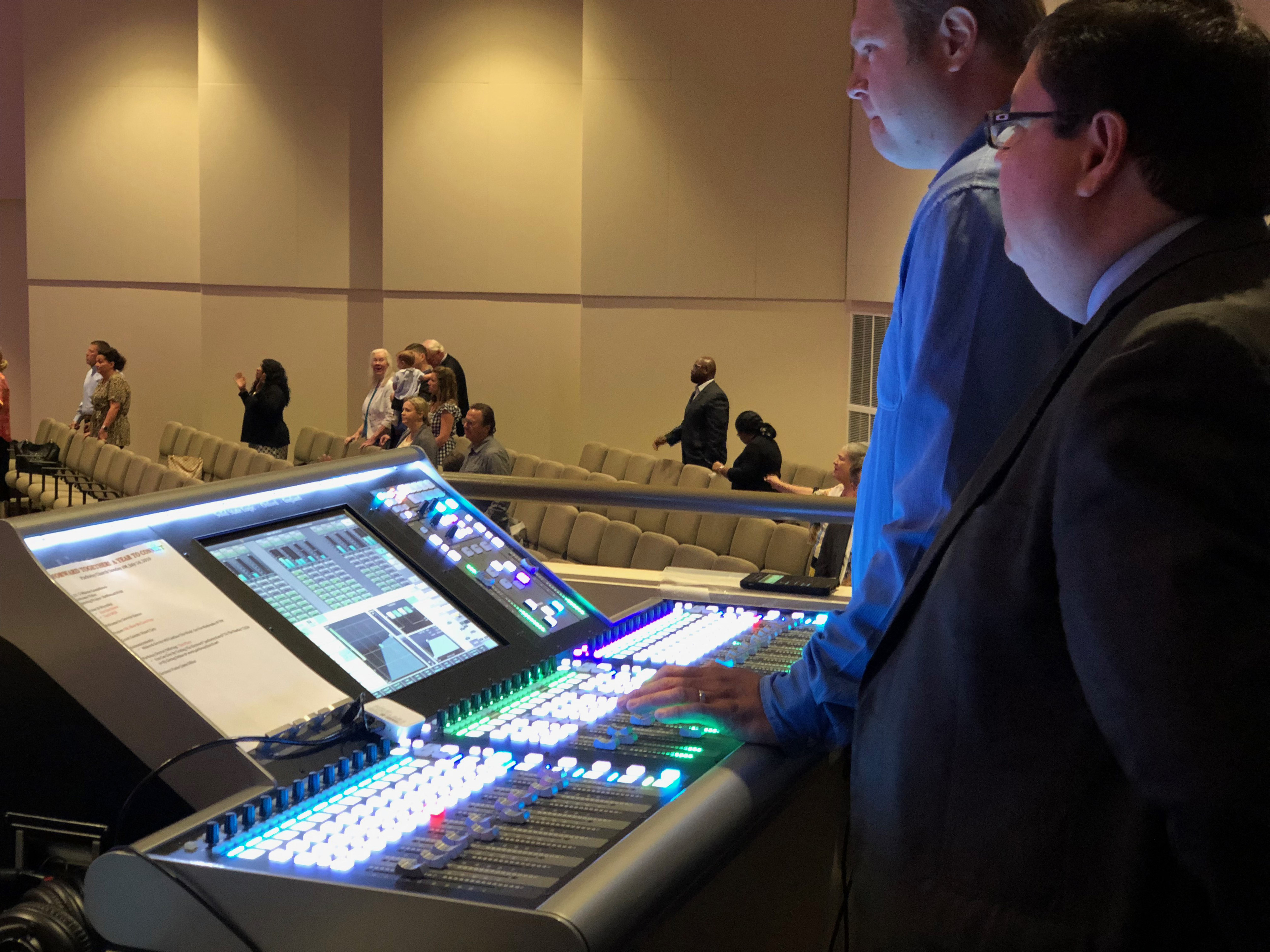 Mississippi, USA – Parkway Pentecostal Church in Madison County, Mississippi, regularly holds dynamic worship and live broadcast services for its hundreds of regular worshippers. In their quest to provide a more dynamic audio experience for their congregation, the church recently invested in an SSL L200 console and an SSL SiX mixer in time for its annual Apostolic Conference, enabling their volunteer-based technical team to put on flawless live services.

Founded in 1991, Parkway Pentecostal Church has been steadily growing its numbers ever since. “We have a 46,000 square-foot auditorium, and we have not only our local church in Madison, but a fairly large broadcast audience that joins us weekly,” said Parkway’s music director, Serena Lentz. “One of the main things that we wanted to improve was our broadcast quality; we were very dissatisfied with what we were sending out over the airways.”

After Porche Advanced Systems showed Lentz the benefits of the SSL L200 and how it could be utilized along with the SiX compact console, Parkway Pentecostal Church decided to switch to the new consoles right away.

Porche’ Advanced Systems’ owner, Jake Porche’, has been working in professional audio for 25 years and is a big advocate of the SSL Live series of digital consoles for many reasons:

“I’m old enough to have cut my teeth on analogue consoles and outboard gear, and the warmth that comes along with that,” he adds. “This is my level of importance on a mixing console: how does this console process the audio and keep it true to its original form? What does it sound like? Yes, I love features, and yes, I love user-friendly, and with SSL you have the ability to adapt to any live workflow.”

“Where I believe SSL really shines, is in their summing algorithms. The console’s ability to process multiple inputs, and keep those inputs separated in the mix is a true leap forward for digital consoles. It truly separates SSL from all other manufacturers at this time. This has been my main problem with digital consoles moving away from analogue consoles. I like the stem groups, the ease in changing the fader count layout, in addition to the dynamics.

“Usually with digital consoles, you can just grab your finger and get ready to start spinning that EQ! You can make a 9dB cut, and it’s like: ‘did I do something, or did I not?’ But if you make a 2dB cut at a certain frequency on the SSL, you hear it immediately. It’s very easy to place things in your mix. I think that’s just the ability of the console to place the signals much faster and more accurately than other digital consoles on the market.”

“I obviously can’t be there all the time at the church, but when I’m not, and we get questions from users, it’s often: ‘how do I do this, or access this?’, and I normally ask: ‘what channel do you want to send where?’ and when they tell me, I simply say: ‘see the Q button? Press that, and it populates what’s being sent out from that respective channel’ – this is the Query functionality, which is just fantastic on the SSL.”

Equally as enthusiastic about the L200’s features is Jason Ryder, general manager and systems designer at Porche’ Advanced Systems:

“With the church not having a full time audio guy, and it being strictly volunteer-based, anyone that uses it – whether they are experienced or newly trained on the console – we don’t have to dig deep down into menus in order for them to have a successful event.” Ryder explains why the SiX mixer was brought in for the church’s broadcast events. “My philosophy has been, if the room is right (acoustically) and the system is right (EQ), if we send a post-fader mix down to broadcast, this should translate to a good live stream mix. So we are using the stems to do the following: the SSL SiX has two mono and two stereo channels. We’re sending all microphones that are used for preaching and teaching to the first stem, and sending that audio to the first channel of the SSL SiX.

“Then, we’re sending all the lead vocals to a second mono stem feeding the second mono channel of the SSL SiX. For the third stem, we’re sending a stereo mix of all the background vocals – this stereo mix isn’t hard-panned left and right, but slightly separated: for example, the singer standing to the far left would be panned more to the left than the person standing next to them; we’ve effectively ‘widened’ the background vocal mix using stems.”

Ryder States that this does two things for the broadcast mix:

“It makes the vocals bigger, and because we’re mono on the leads, we can get the lead vocal out ‘front and centre’ a little easier. And finally, for the fourth stem, we are sending a stereo mix to the last stereo channel; again, we’re not hard-panned on all of the instruments, just providing some separation for that ‘bigger’ sound everyone likes. We’ve got some compression and delay on the stems on the L200. The stems and the dynamic EQ do the heavy lifting, and make the broadcast volunteer’s job as easy as possible – they’re just having to manage levels at this point. Also, it just sounds a lot better bussing this down to four mixes. And for special events, we deploy the SSL iPad app for fine tuning the mix for broadcast.”

Crucially, the congregation has noticed a big difference in the improvement of the sound:

“We’ve had several people comment: ‘What’s different? What’s happening with the sound?’” Lentz enthuses. “It has made everyone’s lives so much better because things have been simplified, and we have a system that we can depend on!

“We want to eventually get to the point where we have a production team on staff, and take it to another level, but we’re not there yet. This has been an answer to our prayers to help us do what we need to do, and to provide the level of quality that we want to provide – and we don’t have to call for support to get someone sent up here every week to help us!”