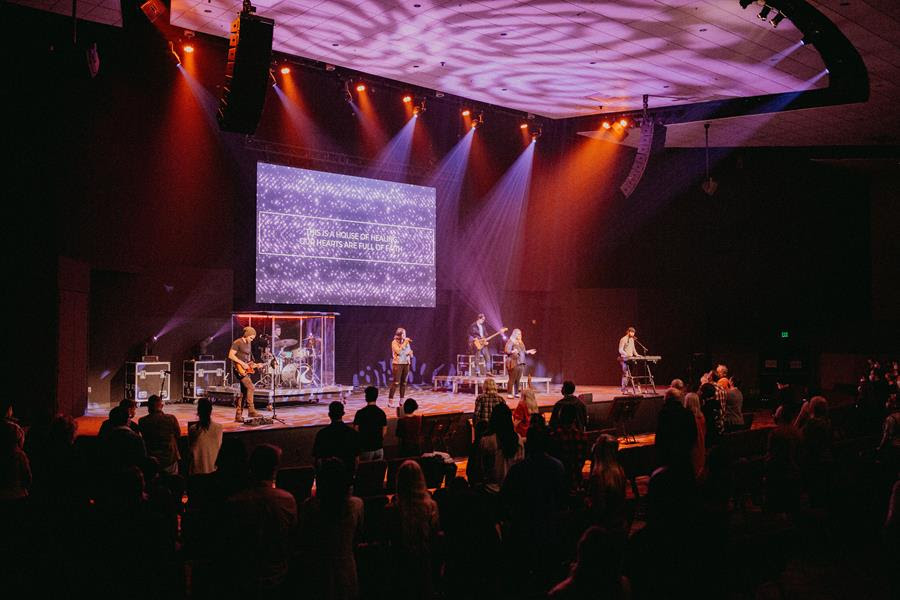 A new technical infrastructure, including a premium Martin Audio Wavefront Precision (WPS) PA, has been installed at the River City Christian church in Rancho Cordova, California.
The full integration was undertaken by Sacramento Production Services (SACPS), whose Project Manager, Keith Wackford co-designed the system with the church’s Director of Technology, Brian Webber. Both men are long-term colleagues who have over a ten-year history working with Martin Audio systems.

The church had been faced with the need to expand its facilities due to surge in attendance prior to COVID-19. An architect was brought in and the decision taken to move from all flat seating to stadium style arena seating. By also reducing the stage thrust this would expand capacity from 850 to around 1200. “In addition, the previous control booth was up on the balcony but the new one has been relocated to the audience area, so we can hear exactly what the audience is experiencing,” stated Webber.

Tasked with replacing the systems, Brian Webber approached Keith Wackford and WPS was chosen following a demo “which blew me away”, said the former.

But the decision had not been straightforward as they first reviewed two other globally recognised brands; but the Church’s technical director always had his eye on WPS.

“When SACPS first bought a WPM system a few years ago and it was obvious the tech behind it was next generation,” Webber observed. “But then we got WPS on demo and put that next to the WPM, and I knew I had to have it. I was super impressed with the smooth, rich sound. It was a no-brainer.”

He recognised it would be a challenge to work within the room’s acoustics. “But it’s great to have the audio only where it needed to be and not where you don’t. You really can’t hear anything behind the PA, no slapback, and all the energy is focused to the seating areas. We loaded the DISPLAY export file into the iKON amps and other than notching out a couple of frequencies, we basically ran the system straight out of the box.”

Five Martin Audio SXC118 subwoofers have been placed in an arc across the front, powered by six channels of process-controlled Martin Audio iKON iK42 amplifiers, and optimised using Martin Audio’s proprietary sub array calculator as well as EASE prediction software. They were chosen for both their size and their ability to utilise a cardioid pattern to send more of the bass to the listening areas and have a high rejection to the rear of the speaker, thus eliminating low frequency information onto the stage.

Finally, River City Christian also utilises Martin Audio in its children’s room where CDD12’s and CCD8’s have also been installed.

Martin Audio’s proprietary DISPLAY software modelled the room, with optimisations carried out by Keith Wackford. “We worked with [Martin Audio’s] Joe Lima on to get a design concept going—based on EASE data—and input the numbers into DISPLAY.

“Joe went through the DISPLAY file while final system tuning was occurring and was able to make a few final tweaks to the file, reducing the dB offset from first seat to last. We achieved total feedback rejection, despite the PA being quite a bit upstage thanks to the Hard Avoid® functions of Wavefront Precision. You couldn’t have got away with any other rig.”

This was complemented by further onsite tweaks and calculations to the design as the system went in—the measurements reconfirmed by Martin Audio’s Will Harris, along with Keith Wackford. A laser measurement was also undertaken at installation stage to verify that the field drawings matched those within DISPLAY. All of this ensured that the system would meet or exceed client expectations.

WPS also had to display its versatility as it is tasked with reinforcing two styles of service: a classic worship, with choir and orchestra, with pastor and celebrants on radio mics, and a more modern, high energy service, featuring a five-piece worship band.

Finally, the installation is also neat and aesthetically pleasing as the installation team has managed to avoid using obtrusive rigging. “Guide ropes would have been completely detrimental to the look. In fact the CDD6’s almost looks like they are floating on the downstage edge,” says Wackford.

Summing up, he says, “Consistency is one of the most impressive parts of this installation; from front to back and left to right the coverage at every seat is amazing. People we have brought in to hear the new sound system have all commented on its consistency. Furthermore, there’s nothing harsh about the sound—it’s easy to listen to for hours, it’s just so smooth and you don’t get fatigued. The system simply tailors the speaker presets to the room via the DISPLAY file.”

This is echoed by Brian Webber. “The ability to custom build a system and tailor it to your building without having to boost anything is scarcely believable,” he concludes.

Having previously rented a sound system solely for outdoor use during the pandemic, the church is relieved to have moved back indoors once again—with the necessary precautions in place—while congregants still have the opportunity to log in and attend virtually if they prefer.