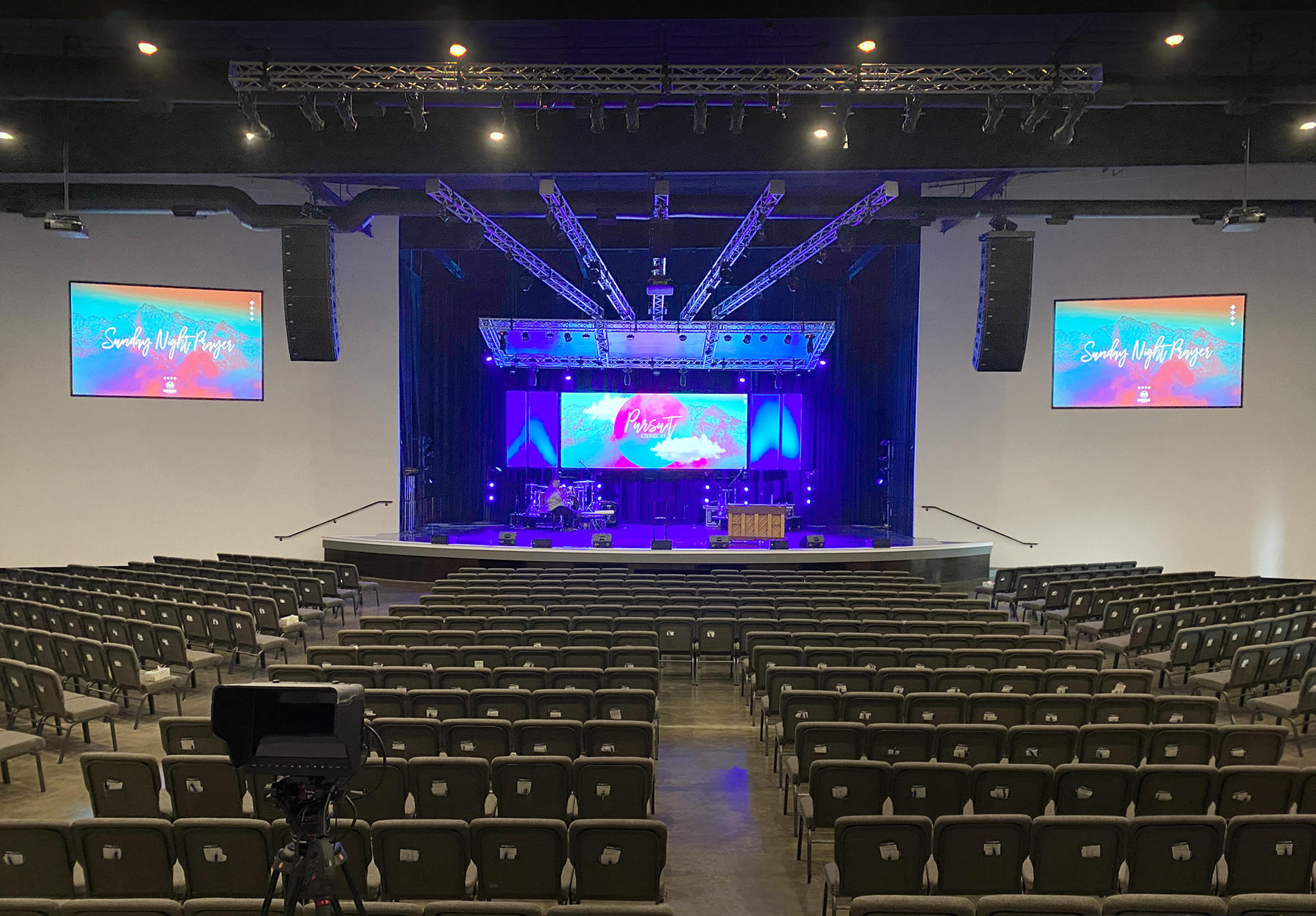 With over 50 years of ministry and community service, Tabernacle Church, located just outside Nashville, in Clarksville Tennessee, decided in 2017 that to keep up with their tremendous growth, they would undergo a monumental change with a grand new construction project, to reemerge as Mosaic Church—adding 65,000 square feet to their campus, including a 1,500 seat performance space.

When audio and integration firm, Holly Media was asked to oversee the expansion of the performance space, owner Fred Holly, with over 30 years of pro audio experience, led the design effort. “With new dynamics and changing needs, the scope of the ministry has changed—it’s become a new work,” said Holly. “Tabernacle seemed old fashioned. The name didn’t match the demographic of our church because it’s very diverse—and it’s thriving. The new Mosaic Church wanted to reflect that.”

The original structure was a smaller sanctuary [about 200 seats] and was insufficient space for many years. The church adapted for larger congregations by expanding Sunday services to four per day. Recently through COVID, the church was mobile, moving its worship service to a local high school, setting up and tearing down in the parking lot each week.

Aside from general construction, Holly focused mainly on the performance space, and the subsequent procurement of an audio system and its installation. “Early on with my ideas for the shape of the room, I didn’t want to encounter any problems later on. I wanted the diffusion to be completely natural — with the splay of the walls and installing surface treatment.

Not only does Holly Media tackle the challenges between space design and installing sound systems, Holly pulled in one of his trusted resources for advanced surface techniques and sound dampening.

“Usually when clients show me plans for a church, it’s obvious architects know nothing about acoustics,” said Jay Perdue, owner and designer at Perdue Acoustics, and the lead instructor of architectural acoustics at InfoComm University. “They’re more focused on what it’s going to look like versus what it’s going to sound like.”

Upon first glance, Perdue knew something about this new space was very unique. “When I first saw the room design, I thought Fred really did his homework,’ said Perdue. “The shape of the room was very nice with no corners to deal with. I checked all the parallelisms and found slap back on the back wall was a non-issue. I not only check a room for echo and reverberation, I conduct intelligibility testing as well. After a 13-point check throughout the space, it has the flattest response I’ve ever seen.”

Holly has worked with most major audio brands and was looking for a sound system to deliver. “Being in this business for as long as I have, I’ve come from the old school thinking that having a solid, heavy box would also give solid frequency response — or a chance at it,” said Holly. “At first I thought to spec a JBL V 20 rig, but in the spirit of transformation, I wanted to find something new.”

When Holly was referred to RCF and was introduced to Jim Reed [RCF product specialist and system designer] his curiosity was piqued. “When we spoke, Jim said he was willing to demo an RCF TT rig personally, he had my attention.” noted Holly. “I sent him the final room schematic and he returned an EASE drawing, and I was like, ‘when can you come’? [laughs] I was very excited about the possibilities.”

“Pulling everything out of the box, I was pleasantly surprised at the weight of it [TT 55-A module]. The stuff is hardcore, man [laughs]. I’m an old military guy, so I know that if it’s heavy, it must be expensive.”

Once all the products were out of their boxes and flown, Holly was also surprised at the time it took to test the sound system. “Literally, out of the box every single thing worked, 16 boxes, we had the network up and we’re firing. Everything was coming together, and the rig sounded amazing — very musical.”

Upon completion of the installation, RCF product specialist Zachary Anthony was brought in to provide tuning, optimization, and training. “The sound quality from a TT rig is exceptional, and paired with the acoustic treatments, the room is near perfect.” said Anthony. “I stopped turning up at 110db at mix position. Listening to that system is like listening to a giant pair of studio monitors — this room is an absolute pleasure to mix in.”

Mosaic Church celebrated with a socially distanced congregation of about 700 proud parishioners and many who contributed to the church’s reemergence.

“The RCF system is truly a work of art,” proclaimed Perdue. “I don’t know where you can go to get a better [sound] experience. The performance space at the Mosaic is the best I ever heard. I can’t say that I’ve heard better.”