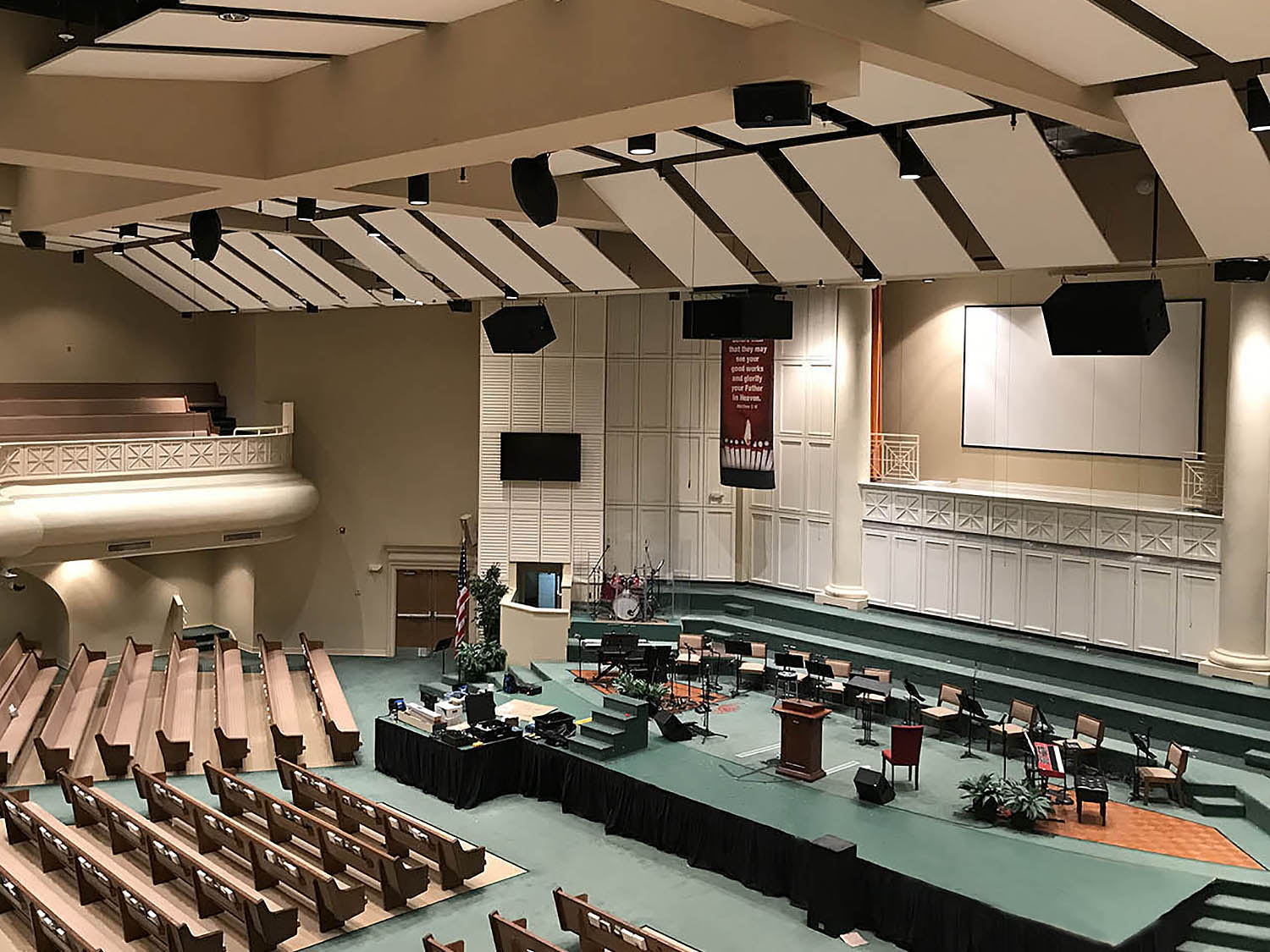 The 1,300-seat sanctuary at Eastmont Baptist Church in Montgomery, Alabama is both beautiful and unique. Pews wrap around a stage that is much wider than it is deep, and a large balcony overhangs much of the main floor in a similar wrap-around design. With the deep overhang, good sound reinforcement for Eastmont’s orchestra and choir would be challenging under the best of circumstances, but its previous sound system was a ‘Frankensteined’ amalgam of components and band-aids that sounded bad from the start and got worse over time. AVL integration firm Emmaus Media & Design, of Harrisburg, Pennsylvania, worked with Eastmont to design and install a high-fidelity Danley Sound Labs sound reinforcement system. Danley’s famous point-source pattern control allowed Emmaus to hit every seat with high-intelligibility, high-SPL coverage that varies by no more than 1dB!

“In addition to its regular Sunday services with orchestra and choir, Eastmont hosts a lot of touring acts,” explained Tim James, owner of Emmaus Media & Design. “Their previous sound reinforcement system was a conglomerate of components in a center cluster that was original to the building twenty years ago. The integrator evidently went out of business halfway through the project. It was a mess. The coverage was terrible. You couldn’t walk five feet without it changing. The balcony had no high-frequency content at all. Intelligibility was abysmal. When touring acts came through, they always had to bring their own PA. Eastmont wanted a new system that would sound fantastic day-to-day and that would make them proud when touring acts came through.”

James had three goals. First, he wanted to give Eastmont a stereo system to bring their music to life. Second, he wanted a system with excellent pattern control so that he could hit all of the seats without exciting the rather live acoustic space. Finally, he wanted boxes that could hit concert-level SPLs in service of the touring acts. “Danley is unique in delivering high fidelity, high SPLs, and great pattern control, even at lower frequencies,” he said. “I looked at the drawings and worked out a Danley system that would cover everything.”

A stereo pair of Danley SH96HO full-range loudspeakers serve as the mains, with a Danley DBH218 subwoofer rounding out the low end from the center-flown position that was previously occupied by the Frankensteined center cluster. Six Danley SHMicro loudspeakers provide delayed coverage to the balcony, while eight Danley Nanos do the same under the balcony. “Since the room is very wide and the seating wraps around the stage a bit, I needed some side fill,” James said. “The tricky thing is that the floor seating near the sides is under a sizable balcony projection. So, to cover that front seating, I used a Danley SBH20 column-form loudspeaker on either side. Its wide horizontal coverage hits all of the seats I needed it to hit and its narrow vertical coverage kept sound off the balcony. It’s an unusual use of an SBH20, but it works well.” James flipped the stereo signal to the side fills so that everyone gets to enjoy some stereo spice. In addition, two more Danley SBH20s flown from the catwalk cover the choir at the back of the stage without exciting the back wall. QSC PLD-series amplifiers power the system with Ashly processing.

“In addition to all of Danley’s excellent sonic properties, the Danley boxes have a great form factor and aesthetic,” James said. “Throughout the installation process, church staff kept commenting on how clean everything looked. It proves that you don’t need a ton of Danley boxes to achieve results. I love how it came out and so does everyone in the church. The fidelity is stunning, and it extends to every nook and cranny in the room!” 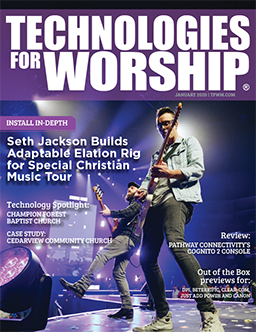