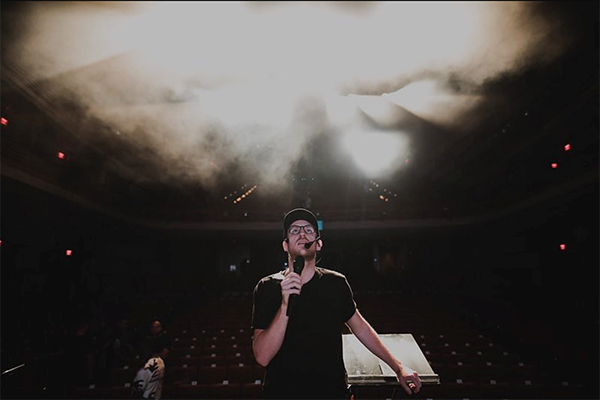 Charlotte, N.C. — Charlotte-based Elevation Church now has 19 campuses around North Carolina, all with very high production values. Each of the locations has its own worship band, and services are streamed from Elevation’s broadcast location to its satellite locations and the internet during worship experiences each weekend.

About four years ago, one of the technical volunteers at the main broadcast campus where sermons originate, got tired of wearing the large bulky double muff can-style headsets for tech team communication. So he bought a Point Source Audio CM-i3 in-ear headset with his own money. Its innovative lightweight design goes behind the head, as opposed to over the top of the head. A lightweight frame goes over his ears and it has small earbuds, a head strap around the back, and a mic that’s a little larger than a lavalier-style mic. Other techs took notice and now 15 volunteers at Elevation have all purchased their own set.

Jared Olson is production director at Elevation’s Ballantyne Campus. Olson says, “I wear mine for 8-10 hours a day every Saturday and Sunday. I’ve had the same headset for four years with no problems. Any production I do, I do with this headset. I wear glasses and any muff-style headset gives me a headache.” Olson continues, “Most of the techs have custom in-ear molds and you can easily replace the stock or standard earbuds with your in-ear molds. It’s even more comfortable, and also provides an added measure of isolation.”

During those 8-10 hours a day, Olson says he wears the headset listening to rehearsals, front-of-house mixes or the streaming mix, as well as for conducting party line communication with camera operators, graphics, the stage, the band—the full production team. As production manager, he says the team has to know he is always available, so that’s why he wears the headsets the entire day. “Even between services we often take cameras outside to shoot interviews and video,” he says. Through it all, Olson is wearing his CM-i3 headset.

Elevation volunteer Mike Mitchell was the first member of the team to buy the CM-i3 back in 2016. “When I first used the CM-i3 headset, it was transformational,” says Mitchell. “The ability to hear better and protect my hearing at the same time has improved the way I approach my role in the production process.”

The headsets feature the company’s EM-3 in-earphones which can be switched with earphones of the user’s choice. The flexibility also extends the serviceability and lifetime of the product. The headset has a boom moving coil dynamic element with a cardioid pattern and a frequency response of 300 to 10,000 Hz. The earphones feature a single-driver ported design and come with three sizes of ear tips, a windscreen with an o-ring, and a custom storage case.

The newer CM-i5 in-ear headset is a back-electret condenser design offering a noise-canceling cardioid pattern and expanded frequency response of 100 to 10,000 Hz. The earphones feature an improved single-driver ported custom-molded style, universal design that can also be easily switched with the user’s personal earbuds.

Volunteers and staff now using the CM-i3 and CM-i5 in-ear headsets at Elevation Church say using them has made a huge difference in the ease and comfort of the production process and has been well worth the personal investment.