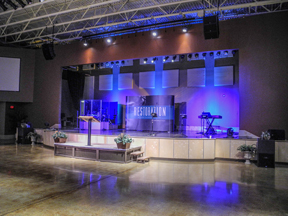 Leaving a rental space for a place of their own was a big step for  Calvary Chapel. Their new campus sits amongst the hustle and bustle of downtown Chattanooga, close to restaurants, hotels, shops and grocery stores, making Calvary Chapel now a visible and accessible part of the community.

In fact, Calvary Chapel’s new home is a converted Bi-Lo grocery store, reminiscent of its former self through the concrete floor and open corrugated metal ceiling. Folding this industrial edge into their contemporary approach, Calvary Chapel cleared the columns and raised the roof, opening up the 100 by 100 square foot space and adding a bit of acoustical treatment to the side walls.

The space seats 750-800 people, in typical fan shaped sanctuary seating, with one center aisle and two on either side. The services are always packed, from Saturdaynight praise band to late Sunday morning service, where they have an extra 150-200 people in overflow areas, connected via fiber.

Their contemporary services, complete with amplified instruments, fit well into this unique, industrious and sleek aesthetic. Making it sound as good as it looks, with hard surfaced, square dimensions, was a whole other issue; one that couldn’t be solved with a one-size-fits-all solution.

“It was pretty rough when they moved in there three or four years ago,” says Tracy Miller of Chattanooga-based DB Technologies. Calvary Chapel called Miller in for a consultation about a year ago, needing his help in taming and utilizing this new space. Miller had previously demoed the Renkus-Heinz PN102 line arrays in the space, but quickly realized he needed a different approach. “With the liveliness of this particular room, a traditional line array wasn’t the right thing. There was just too much sound bouncing around that place.”

What Miller and Calvary Chapel needed was a line array that could be tailored to fit their needs precisely; from rock bands to sermons, without allowing the square, hard barriers of the Chapel to shape the sound. “I had been wanting to try out the VARIA and this seemed like a good opportunity,” Miller says. “We set up a demo, and it was just night and day. With the VARIA array, we were able to taper the coverage and focus the sound on the seating area, without hitting all those walls and reflective surfaces.”

With left and right three-cabinet arrays of narrow, transitional and wide dispersion boxes, VARIA also fits in well with the pre-existing design of the space, complementing both the industrial and the sleek aesthetics. And, says Miller, the dramatic shift in sound quality made the job easier, even for the Chapel’s new sound guy. “He’s been just getting up to speed on the Roland M400 console, and he usually asks a lot of questions. But we went from nobody in the room to a packed house and it was so smooth, I did not have to go to the console even once.”

Miller recalls, “after the first service, I got a text: ‘we want to keep these.’ And I had the feeling that would be the case.”