Excerpt from: The Book of Transformations, from Christie

Getting started requires an understanding of the stakeholders, technologies and operating demands, as well as how to think beyond a structure or object as a screen, and develop a big idea and plan that has a lasting impact.

Defining the key players
There are many players who are involved in conceptualizing, creating and appreciating stunning projection mapping displays.  The following are some of the groups that come together for a typical installation, but this may vary depending on the project.

Clients: They initiate the request for a projection mapping installation and define the core requirements for the project.  They can include anyone from consumer brands, museums and government to nightclub and theme park operators.
Stagers: The specialist companies that focus heavily on the event business, usually renting the projection and related hardware needed to “stage” events, and providing the assortment of skills and experience needed to design, manage and execute projection mapping spectacles.
Content Developers: While many staging companies have in-house creative capabilities, production studios focus specifically on the output of the projection systems. They conceive and produce the video and motion graphics that transform objects and structures.
Systems Integrators: Professional AV and IT systems companies have the necessary experience and broad understanding of all the requirements – from optimal technology choices to light and noise restrictions – needed to execute successful projects.
Audience: No amount of investment in technology or creative matters unless it has the desired effect – from pure wonder to calculated brand awareness – on the viewing audience. 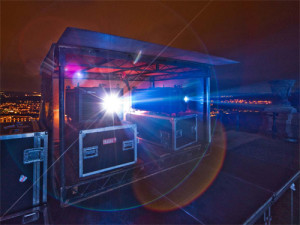 The big idea
The true wonder of projection mapping comes from the effect of the illusion, where the audience cannot really piece together what is going on.

A structure they thought was familiar is transforming in front of them – in crazy, visually wonderful ways – and they can’t quite figure out how.

Kresa has used projectors to shape-shift everything from a Chiang Kai-shek Memorial in Taipei, Taiwan to a Warner
Brothers backlot with overpowering color and organic motion visuals.

In its highest forms, projection mapping is art on a massive scale – the transformation of a familiar object or structure in a way that makes people stare in pure wonder.

“One of the things we are always trying to do,” explained Obscura Digital co-founder Travis Threlkel in a presentation, “is inspire people and capture the audience’s imagination … get people thinking and dreaming.”

Obscura has celebrated the beauty of Islam on the marble walls and towering minarets of an Abu Dhabi mosque and turned the seaside facade of a San Francisco science center into a living lab.

Storytelling power
From telling the story of a city on a wide stretch of riverside grain silos to bringing an ancient Egyptian temple back to life, projection mapping has enormous storytelling power, and offers an equally huge creative outlet to digital artists.

“The cool thing about having pixels everywhere in these massive megapixel canvases is the potential – potential realized on physical real estate, with the necessary resolution, to convey an exhibitor’s theme in any way imaginable,” says Roy Anthony, a senior solutions architect at Christie Digital Systems.

But it’s not always about grand scale. Among the projects guided by Anthony was an augmented reality demo that enabled car shoppers to change the look and color of a car using a touch screen with precision projections on a 3D-printed scale model of an Audi R8. Coming up with and then executing the big idea for a projection mapping project requires a blend of vision, ingenuity, technical knowledge and considerable experience.

More and more tools are coming along that make execution easier, but being technically able to do something doesn’t mean the output will be great.

Starting with a concept
That big idea first needs a concept and visual narrative built around it. On ancient or landmark edifices that storyline may come relatively easy, as the visuals are often tied to the history of the structure and its surroundings.

In other cases, big surfaces tell entirely different stories tied to an event or brand, working with the surface primarily for its visual interest and sheer scale.

Fundamentally, projects need a purpose and goals. “We always begin with our objectives,” says Threlkel. “‘What are we trying to do?’ … and then we work backward from there.”

The biggest challenge is the structure – be it a building, famous landmark or even an object, like the dish of a giant radio telescope used to mark the 50th anniversary of the space age. What are the limiting characteristics of the shapes, dimension and base colors?

Production teams have different styles and workflows to tackle these challenges. Some will work around the most visually demanding elements, avoiding them or building them into the narrative. Big, vibrant colors and intriguing motion visuals can draw the eye from problematic surfaces, or simply overpower them with colored light. 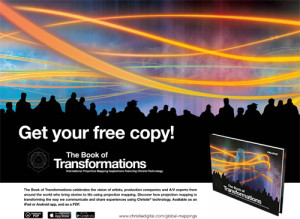 Using tools & experience
Other producers apply tools and experience to incorporate challenging shapes and textures into a presentation. To architecturally map the Sydney Opera House for the landmark YouTube Symphony Orchestra performance, Obscura used millimeter accurate laser scans of the interior concert hall and an aerial site survey – the data collected from a helicopter.

The sheer scale of a projection event can itself be part of the big idea, using dozens of projectors to fully, cohesively illuminate a big structure. But the experts say “big” can’t be the only characteristic.

“I like to do a project in such a way that it looks very organic,” says Kresa. “We bring it in as art. We create a fantasy world and put people in a dream state. We try to make it impossible to comprehend what’s going on before their eyes.”