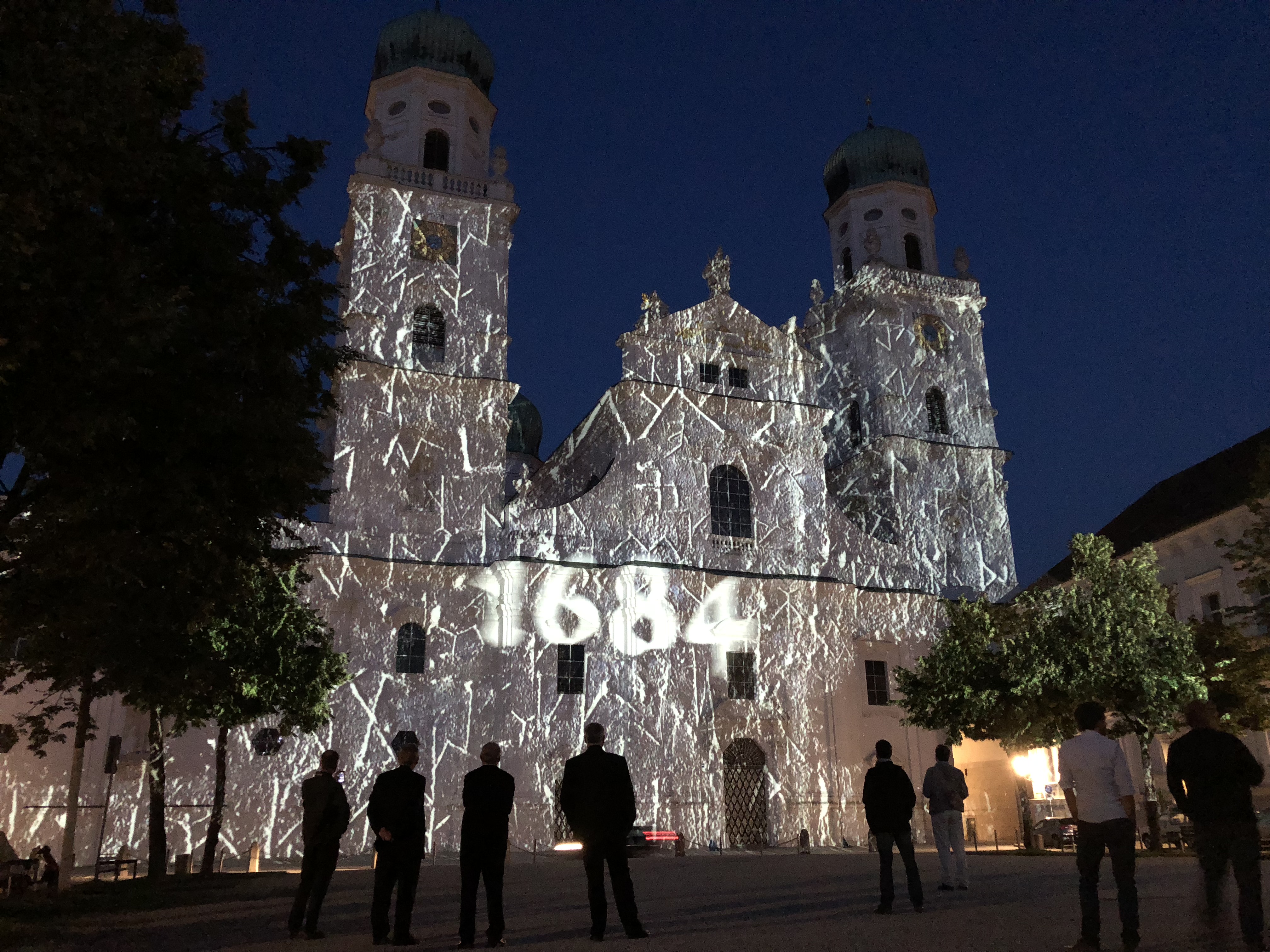 Passau, located in Bavaria in the South of Germany, is steeped in history rich with Baroque influence. The city’s design is dominated by large squares, romantic promenades and majestic bridges, and framed by the Veste Oberhaus castle and the Mariahilf monastery, the historical center looks like a floating ship. At the heart of its spectacular skyline is St Stephen’s Cathedral – created in the 17th century by Italian Baroque masters and home to the largest cathedral organ in the world. This was the impressive backdrop for ‘Symphony of Light and Sound’ – a projection-mapping showcase displayed on the façade of the imposing building.
Symphony of Light and Sound celebrated 350 years of Passau’s Baroque masterpiece, with the multimedia show telling the story of the cathedral, and the documents and architecture within. The event also incorporated sacred Christian music and takes spectators on a journey back through time – visiting the church in all its iterations over the decades.

The U.S. Federal Communications Commission (FCC) long ago began enacting laws to address captions, and other government entities around the world have done the same. In the U.S., the Twenty-First Century Communications and Video Accessibility Act regulates closed captioning for anyone broadcasting content to viewers in the United States, whether by standard over-the-air distribution or over IP. A more recent FCC ruling took captions into the Internet realm, saying that TV networks and video websites must provide closed captions for any TV content available online. The ruling means that, with certain exceptions, any video content that has aired on TV must also have closed captions when streamed online. FCC regulations have also evolved to include requirements for caption correctness, completeness, and timing, and pending review are additional regulations for any video clip being distributed over a streaming service.

When an issue is reported, the burden of proof is on the broadcaster to show that there were no problems. The rules affect every device, website, distributor, producer, and network that carries long-form broadcast content. Houses of worship are no exception. Any church distributing programming via a television broadcast channel — there are close to 30 such churches in the United States alone — is subject to closed captioning regulations. If the church is distributing that same programming over streaming solutions, then it is subject to further regulation as described above. Failure to comply could result not only in fines and penalties, but also in a lower quality of experience for worshippers and a barrier to receiving the church’s message. Though closed captioning doesn’t apply to all ministries now, it will become more and more relevant as churches grow and technologies evolve, such as distribution through OTT providers.

There are various factors most know about when setting up a projection system but the proverbial “devil in the details” often goes overlooked. I’m talking about a projector’s vertical alignment. It is a relatively simple function but it has small elements to it that every installer should be aware of and that goes double for houses of worship.  It may be a small matter, but the difference between doing it right and wrong will come with either great rewards or a potentially costly disappointment.   This is especially important for Houses of Worship because there are so many different ways a projection system can be installed and there are often more variables at play than an enclosed conference room or home theater.  As a person of faith, I want to contribute to your congregation’s success. This is one of those AV veteran moments where a small bit of advice can spare you from buying expensive AV gear you don’t need, while getting the best performance out of the equipment you have (or can realistically afford).  This is also a topic that will help enhance you the ability to make wise decisions when buying AV gear whenever an upgrade or new building project is in order.   With all that said, saddle up; for the next few minutes we’ve got  work to do…

After More Than a Year of Development, Customers Will Enjoy a Streamlined and Intuitive Experience for Selecting the Industry’s Leading Projection Screens Visit Stewart Filmscreen, at InfoComm 2019, Booth 2842 …