La Casa de Dios Church is located in Chicago, IL, and started out as a Spanish-language home-based bible study group of seven people, with our pastor leading the study via cellphone from his home in Texas. However, as the small study group grew, Pastor Efrain Isaac moved to Chicago in 2009 to join them – and La Casa de Dios was born! We were able to move from a home-based church to our current facility (a converted house) in 2012. We currently have about 60 members, including children.

As time went by, English-speaking members started joining us, and since they couldn’t understand Spanish, I did the translation for them. Then we had a family from Tanzania join us, and we were translating from Spanish to English to Swahili. We now translate from Spanish to English, from English to Swahili, and from Swahili to Kinyarwanda. Initially, with the translation, I would sit in the back row with whomever needed the English translation sitting in front of me – we would literally translate in real time from the back of the church. When Swahili was added, our Swahili translator would sit in the back as well, near enough to hear me, and then translate to Swahili, and likewise when Kinyarwanda was added.

As you can imagine, all the translation started overpowering the original message and it was becoming disruptive to the service, and that’s when we realized we need translation equipment. We didn’t really know where to start when we decided we needed to ﬁnd a better solution for our multi-language translation. We’ve just trusted that God would help us ﬁnd the solutions we needed, and we literally found Enersound through Google. A lot of other companies offering similar equipment were just too expensive for our budget, but I was able to meet with Enersound, and after spending time discussing our needs with them, they were able to put together a whole translation system that would meet our needs. They really took the time to understand our speciﬁc situation, and have been available to answer questions and offer solutions with each change to our translation needs.

We ﬁrst purchased two singlechannel transmitters with 10 receivers each in 2014, with each receiver tuned to a different channel (for English and Swahili). In 2015, when we added Kinyarwanda translation, we purchased ﬁ ve more receivers and a new multi-channel T-500 Transmitter, which has a range of 500 feet. We grew again in November 2015, ordering two more T-500 multichannel transmitters (which made the singlechannel transmitters redundant) and eight more receivers, for a total of 33 receivers and ﬁ ve transmitters. Because of the complexity of our language translation needs, Enersound helped us with the initial set-up of the system to make sure it was working properly, and the equipment use was maximized. Enersound was able to recognize our need and also our budget limitations and worked with us to put together a system that would work for us now, and grow with us in the future. As we add new members and – potentially – new languages, we can continue to add receivers and transmitters. We can add up to six foreign languages to our services with the addition of more transmitters, or we can add a transmitter and use it for assistive listening. All transmissions are on an FM frequency, and there can be a maximum of six transmitters working simultaneously in the same room.

When we say we’re a multi-cultural church, we’re not exaggerating. We now have members from all over Africa and Latin America. We have added a co-pastor from Africa that also presents the message in Kinyarwanda, and a third pastor presenting in English. These pastors all work together in the same service, which means we present three languages at one service every week, with three translators working at all times. At La Casa de Dios, we want to make sure that we provide the Word to everyone who comes to our church, and we don’t want language to be a disadvantage. 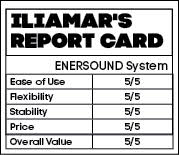 By providing our members with the ability to worship in their own language, they know that they’re a valued member of our church community. Many of our attendees are refugee families and immigrants from all over the world, and as our reputation grows, we anticipate the need for our translation services to grow as well. We trust that God will help us continue to meet the needs of these families through our language translation, and know that Enersound will be able to back us up.