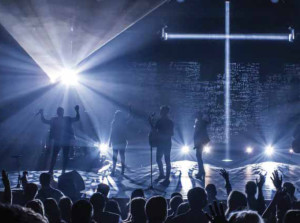 Last year we had the opportunity to work with the crew at Image Engineering on our Easter worship experiences here at Elevation Church. Our theme was “The Genius of Jesus” and we knew we wanted to tastefully integrate lasers to give the experience a more experimental feel. We were introduced to Image Engineering through their work at Passion Conference in early 2015. Initially we were looking into their Vector Beam laser batten, a very cool and unique product. While we didn’t end up going with the Vector Beam, through our research we were introduced to the Beam Composer system that Image Engineering has built.

In our past experience working with lasers, the biggest challenge was trying to communicate what we wanted to a laser technician who doesn’t know our music or style, and to try to get him to ﬁre cues from his system in sync with the rest of our rig. Beam Composer, on the other hand, puts creative control back in the hands of the lighting designer. Once plans for our worship experience were ﬁnalized, we spec’d out six LV25 laser projector units, three for our broadcast location and one for each of our other three permanent buildings, along with the Beam Composer system at each building to drive them the content.

The best way I can describe Beam Composer is like a media server for lasers. The Beam Composer server connects directly to your lasers, and has several different “patches” or looks that you can recall, with several different parameters for each patch. You can also set up zones for your lasers to project within to prevent them from hitting anywhere that could cause damage such as cameras, projectors, and of course people’s eyes. The Beam Composer software can be run standalone, and there is a bit of conﬁguration that is necessary to do directly within the software, but what gives Beam Composer the upper hand over other laser systems is the ability to control it from the lighting desk via Art-Net. I decided to take the trip to Image Engineering’s headquarters in Maryland to get hands on training with the Beam Composer system and to go over safety protocol, since working with high power lasers can be dangerous if you aren’t careful.

Because of the number of possibilities with Beam Composer, it can be a bit daunting to wrap your head around at ﬁ rst. But the Image Engineering team was incredibly helpful during the learning process. GrandMA2 is our console of choice at Elevation, and Nick Logue at Image Engineering has done a great job at making Beam Composer integrate as seamlessly as possible with the grandMA2 workﬂ ow. I was able to spend almost a full day in their demo room playing around with different looks and getting a feel for the capabilities of the system. By the end of the day I felt conﬁ dent enough to program our entire experience on my own.

The week of Easter, our Image Engineering tech, Ryan Severance, came to Charlotte to help us load in gear and make sure everything was working properly. Nick also came down for our load in day to help get everything patched and answer any more questions we had about the software, but everything was so straightforward that we were able to dive right into programming with minimal help. We did have some issues with one of the LV25 units, but Ryan was able to help us out and had a spare for us to swap it out with in Charlotte the next day. The only extra personnel we needed was a trained volunteer to standby on the e-stop button, just in case something were to go wrong with the lasers, but thankfully they never had to hit it.

The possibilities with Beam Composer seem limitless. And because I was able to program lighting and lasers simultaneously without needing to work with a separate programmer, I was able to spend hours getting just the right looks and being intentional about how they integrated with the rest of the rig to make sure nothing felt random or out of place. Beam Composer gives you so much control that I was even able to adjust the scan rate of the lasers to 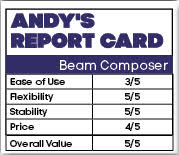 minimize scan lines on camera since our church is primarily video driven. Since everything was programmed into the cues on the lighting console with the rest of our rig, I never had to worry about a missed cue, or something not ﬁ ring in sync. We were incredibly happy with the end product, and I know Nick and the team at Image Engineering have been working very hard over the last year to make even more improvements to an already great set of products. I look forward to working with Image Engineering on many more projects in the future.

Andy Bentley is the lead lighting designer at Elevation Church based in Charlotte, NC. You can see more of his work on Instagram @theabentley, and learn more about the church by visiting www.elevationchurch.org