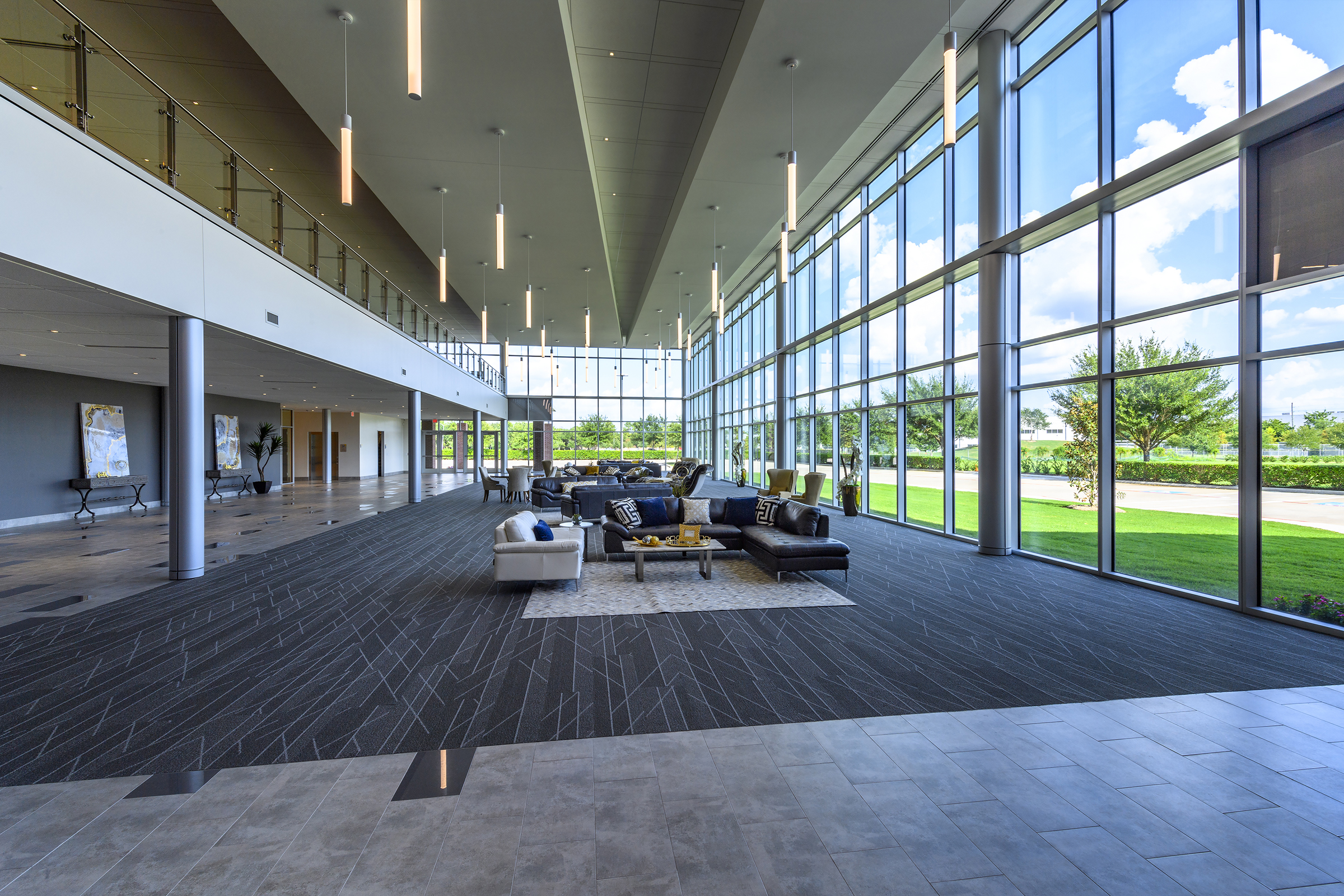 The Legacy Center effectively doubles the square-footage of the 6,000-member church, which was founded by Reverend Byron Stevenson and his wife Sonya in 2004 on a six-acre campus located southwest of Houston. But the new building’s two-story atrium, which features floor-to-ceiling glass on the exterior and glass-walled basketball courts on the interior, presented quite a challenge, according to Covenant Communications’ Kundayi Musinami. “We needed to be able to direct sound from the wall that divides the common area and the basketball court without hitting any glass and getting reflections back,” he explains.

Walkways against the glass wall on the lower and upper floors further complicated matters. “We had very limited choices for rigging points,” says Musinami. “The only other way to cover that area with speakers would have been to mount them right on the edge of the second-floor walkway, pointing down into the common area — which would not have been ideal.”

Happily, Bose Professional had recently introduced EdgeMax, featuring proprietary Bose PhaseGuide technology that delivers a unique asymmetrical vertical pattern for room-filling coverage when positioned at the boundary between the wall and ceiling. “We did predictions and mapping using Bose Modeler software,” says Musinami, and they discovered that the nominal 180-degree horizontal coverage of the EdgeMax EM180 model was the optimum solution for the atrium.

“If we had done this with ceiling and pendant speakers we would have needed 30-something speakers to get the coverage we needed,” he says. “But with Bose EdgeMax EM180, because of how much coverage you get out of one speaker, we ended up using eight speakers, mounted against the dividing wall between the gym and the common area, firing away from the gym.”

In the classroom area, three rooms may be combined into one large space where a conventional solution would have called for the installation of up to a dozen ceiling speakers. “We installed two EM180s in the outer rooms,” says Musinami. “Once they open the partitions and the three rooms become one, they are set up for full coverage, with a projector screen in the room between.”

The church had hoped that Covenant Communications could install a surround sound speaker system to support gaming in the youth room, he continues, but the budget wouldn’t quite stretch far enough. “So we did a pseudo-surround system, where we used three Bose EdgeMax EM90s [providing 90-degree coverage] on three corners and a Bose EM180 on another wall. We combined those with a Crestron DSP unit to give them some semblance of surround, and they love it. EdgeMax gives you more than a ceiling speaker in terms of the fullness and range of sound, so they can get a dramatic effect that enhances the experience when they are playing in there.”

Covenant installed additional EdgeMax speakers in hallways throughout the facility, Musinami also reports. “Altogether we put up 25 EdgeMax speakers in the building. We’re driving them with Bose PowerShare PS604A smart power amplifiers, which sense where the power is needed. Those are working out great.”

Bose EdgeMax speakers proved to be the ideal solution for a range of requirements throughout the building, Musinami points out. “It was one size fits all; we had multiple scenarios that needed a solution and we were able to answer all of them with one speaker solution. Plus, there were some really cool applications where we were not only able to use fewer speakers and save the customer some money, but we also came out looking smarter than we really are! And the client loves it.”

Covenant Communications focuses on audio, video and lighting installations, working with houses of worship and schools of all sizes across the state of Texas and includes megachurches such as Lakewood and Second Baptist as well as Katy ISD’s Legacy Stadium on its list of high-profile projects. “We’ve built our reputation locally just on relationships,” says Musinami. “We partner with clients. And we have a great partnership with Bose Professional.”

Don Odom, Director of Facilities & Operations at Fort Bend Church, stated, “We love the Bose solution – distribution in the hallways is even and just right. We like that aesthetically we do not have a plethora of ceiling speakers and yet the dispersion is just right. It was also a pleasant surprise when we realized the savings would allow us to outfit some classrooms and the youth game room.”