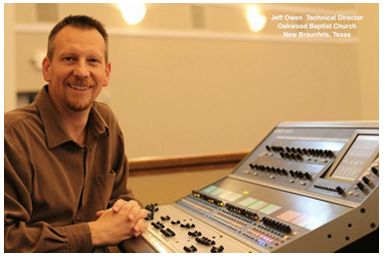 “Sundays are different every week, we can have a guitar player leading our services, a piano player, or our Pastor. On most Sundays we have a hundred or more choir members,” relates Jeff Owen, Technical Director.

From traditional services to concerts and community events, this is a multi-purpose worship venue with several spaces needing flexible, reliable and crystal clear audio signals. Charged with delivering a solution was Doug Windell, Design Manager of Ace Audio in Hutto, Texas.

“It was time for a new mixing console to replace the old analogue board, and I knew the Allen & Heath iLive-144 digital system was the right console for the job,” say Windell.

Accompanying an iLive-144 surface, Windell selected an iDR10 modular mix engine with 64 inputs and 24 outputs, 8 input and 4 output cards, plus a Dante card for recording and streaming requirements. An xDR-16 expander rack was also installed onstage to give extra inputs for multiple audio sources.

“The move to a digital system gives the church the ability to set up different types of worship services from traditional to more contemporary experiences,” shares Windell. “Plus, iLive dramatically improved the room audio and brought down the noise floor to zero.”

“When we started using iLive there was such a clarity of the speaker’s words that congregants began complimenting the sound. The individual limiters, compression and gates on each microphone input are a big advantage. We weren’t built to be a concert hall but the ability to distinguish the different instruments and voicing is wonderful, I can really make the guitar pop, for example. The iLive mixing tools enable us to balance the total sum of the audio to create a beautiful worship experience,” adds Owen.

Another challenge for Owen and his team of audio artists is the overflow room adjacent to the main worship sanctuary.

“We recently had the opportunity to mix our overflow room using a wireless access point connected to the iLive network. All we had to do was have one person in the room with an iPad mixing the audio signal with the Allen & Heath OneMix app,” Owen enthuses. “Challenge solved!”

The church also opened a new children’s space in a building nearby the main worship centre. An iLive-T80 Surface with iDR-48 fixed format MixRack was installed not only to run the A/V needs of the children’s activities but as a training console for the all volunteer audio team.

“The kids space mainly does dramas and video presentations so there is more of an A/V slant to the technology needs. The T80 serves us perfectly for the Children’s space but also to train the future audio techs for their duties in the main sanctuary,” states Owen.

“The Allen & Heath iLive-144 system is so good in the main sanctuary, that there was never a doubt which mix console to use in the children’s space.” says Windell.

The versatility, extensive but straightforward set of tools on both iLive systems has opened a new world of audio technology for Owen and his team.

“I’m an IT guy by trade, when I came to the Oakwood Church, my hobby was sound. Now I’m able to bridge my love of technology with the creativity of music and spoken word thanks to Allen & Heath,” says Owen.

Owen also spoke passionately about how his volunteers have been given a wealth of new ways to explore audio and to “paint an audio canvas” due in large part to the Allen & Heath iLive’s clean and uncomplicated interface design.

Oakwood Baptist Church is now in the process of renovating its student centre, where more iLive systems will be installed.