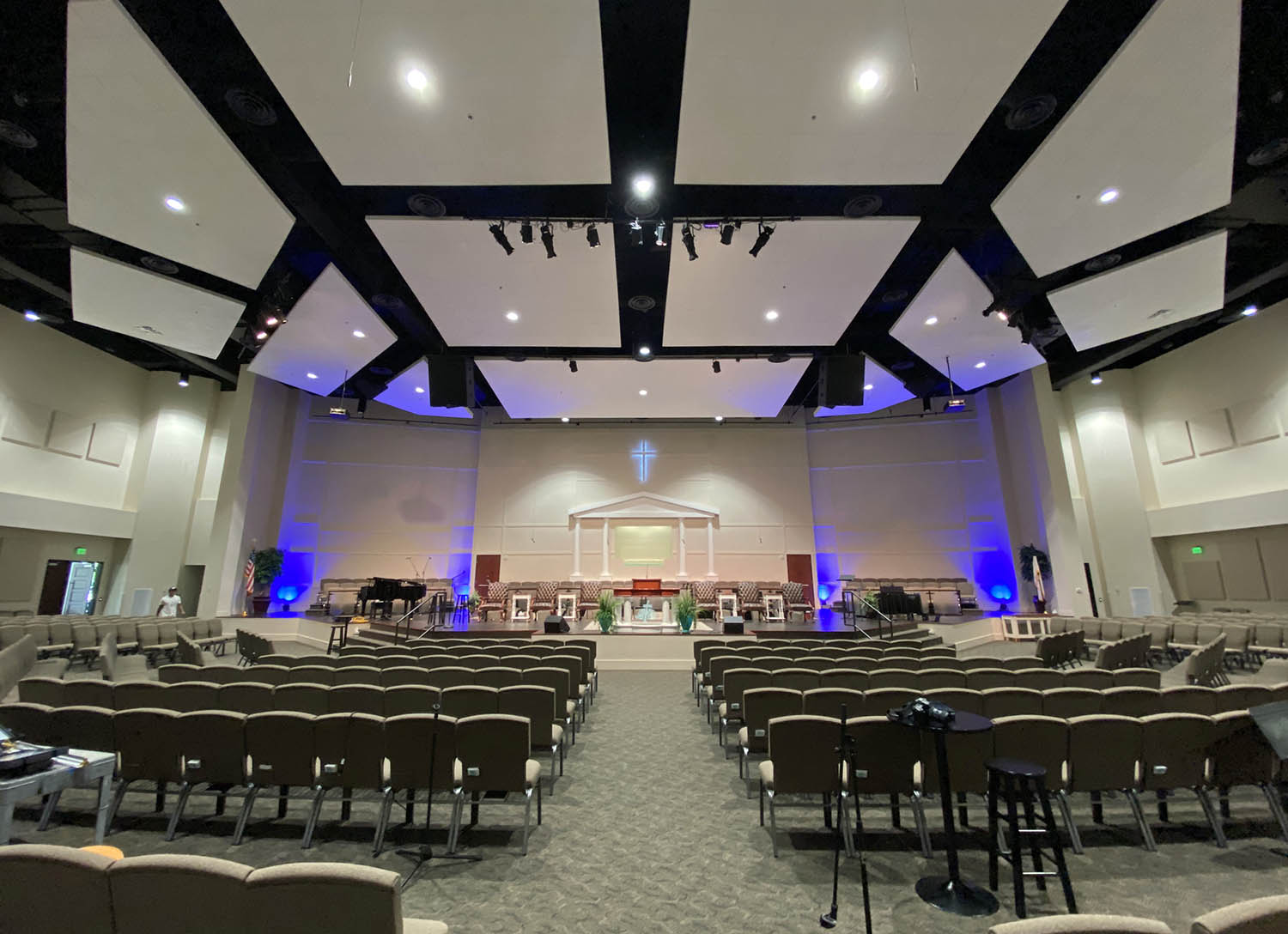 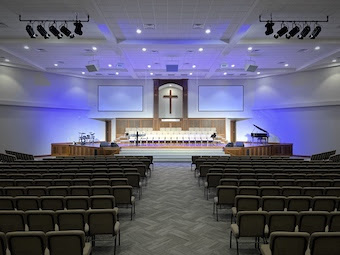 Founded in 1835, Pleasant Grove Baptist Church has come a long way from its founding in an Owensboro, Kentucky log cabin. Just as the church has weathered over 185 years of growing pains and trials and tribulations, the congregation pivoted to social media and streaming services to stay connected in a socially-distanced world. As the church family begins to return to in-person services (at a 33% limited seating capacity with many health and safety precautions in place), an Allen & Heath SQ-7 console and ME personal monitoring system is there to sonically greet them.

“The audio quality difference is night and day,” says Alex Peake, Integration Specialist at JCA Media. “The church had been using another digital console brand before and immediately noted how much easier it is navigating and configuring the SQ. The musicians also appreciated the sonic difference in their in-ear mixes with the ME-1 over what they had before. It is important to provide a system like ME to get the tech out of the way and let the musicians focus on playing and worshiping again.” 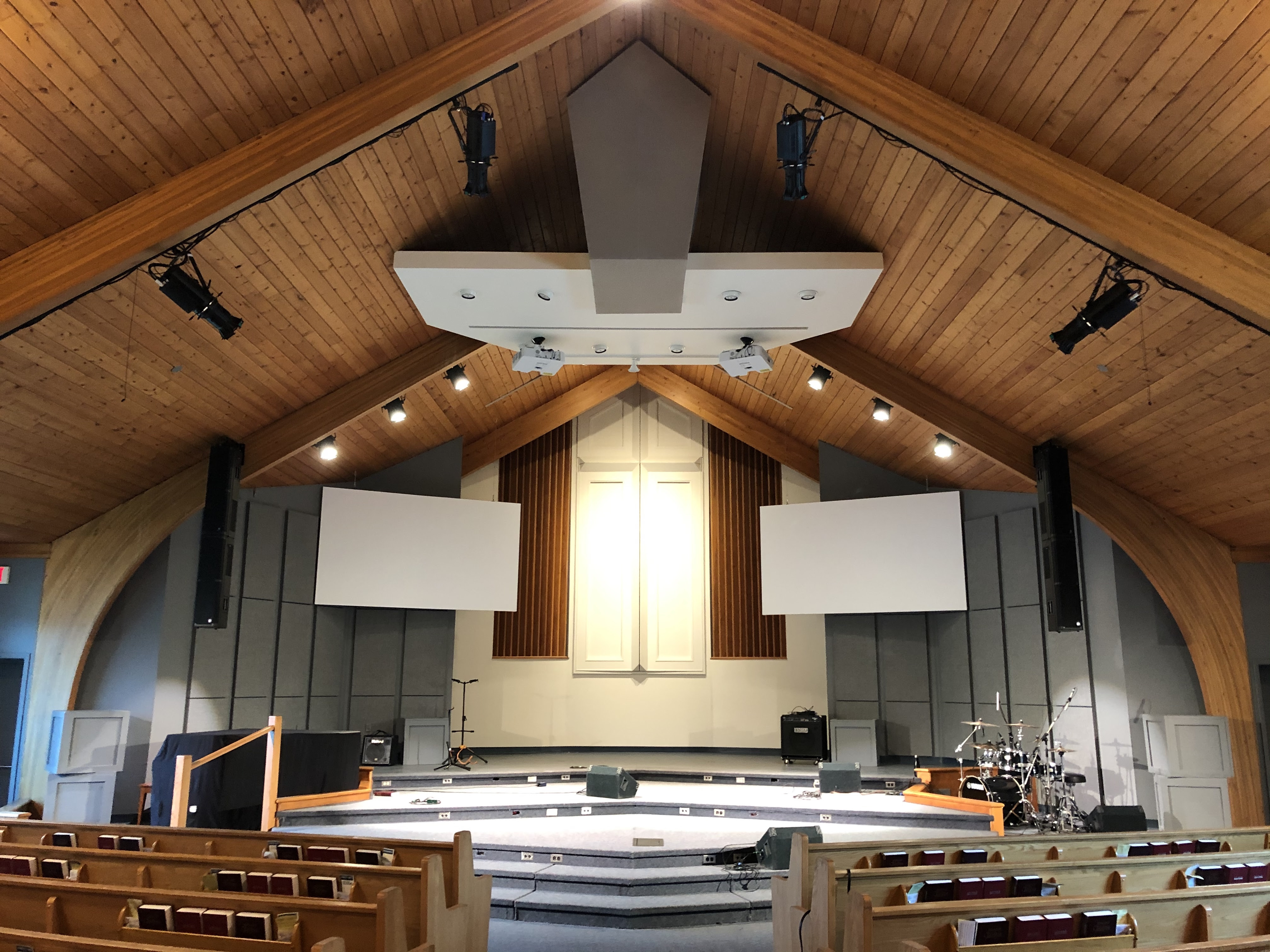 The Fort Garry Mennonite Brethren Church in Winnipeg, Manitoba is, according to its head pastor Carl Heppner, “a vibrant faith community where people of all ages and backgrounds can find a place to belong.” It is also a contemporary church known in the area for incorporating a full band into its services. And that is why, when it came time to upgrade its audio capabilities, the church went with a system backed by Renkus-Heinz.

“The church wanted a cutting-edge system, from audio to video,” said Myron Dyck of Golden West Sound Design, the integrator who installed the new AV system. “What we installed encompasses everything from IP video distribution and projection, stage lighting and acoustical treatment, and the absolute best sound possible. So, that meant going with Renkus-Heinz.”

Describing GLP’s award-winning X4 Bar 20 as “one of the greatest fixtures ever designed”, E2i Design’s Josh Holowicki had no hesitation in specifying it as an essential component in a major technological upgrade at Church of the Highlands’ Grants Mill broadcast campus in Alabama, USA. His decision was backed by Broadcast Lighting Director, Griffin McCravy.

E2i has been a partner with the Church since 2012, providing solutions for their broadcast and extension campuses with lighting and LED video technology. But this latest project was a year in the making due to their determination to select the very best fixtures and build flexibility within the already constructed worship facility. In their determination to create a ‘tour grade’ technical infrastructure, the visual upgrade to the stage space is an exciting and ongoing process. 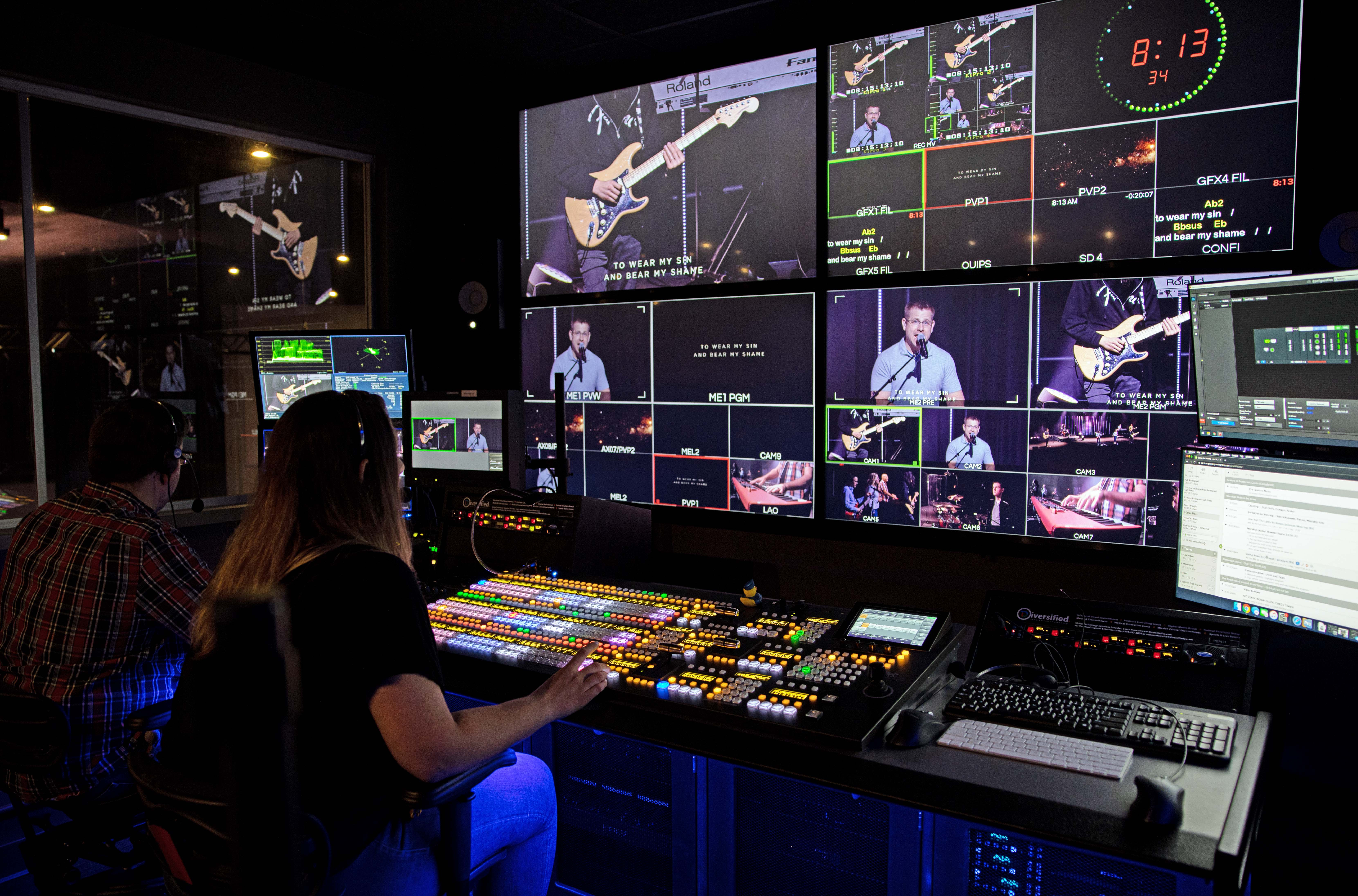 Paired with the FOR-A’s 3320OU large control panel, the HVS-2000 switcher has 2 M/Es and 4 MELites. The switcher is used to display graphics on the I-MAG (image magnification) screen in the church, while simultaneously providing live video outputs for streaming to Facebook Live, YouTube Live, and the church’s website. The Centerville campus also shares a separate feed of its worship services to its three other campuses around Dayton, while using the switcher’s AUX outputs to feed monitors for the band and crew members in Centerville. 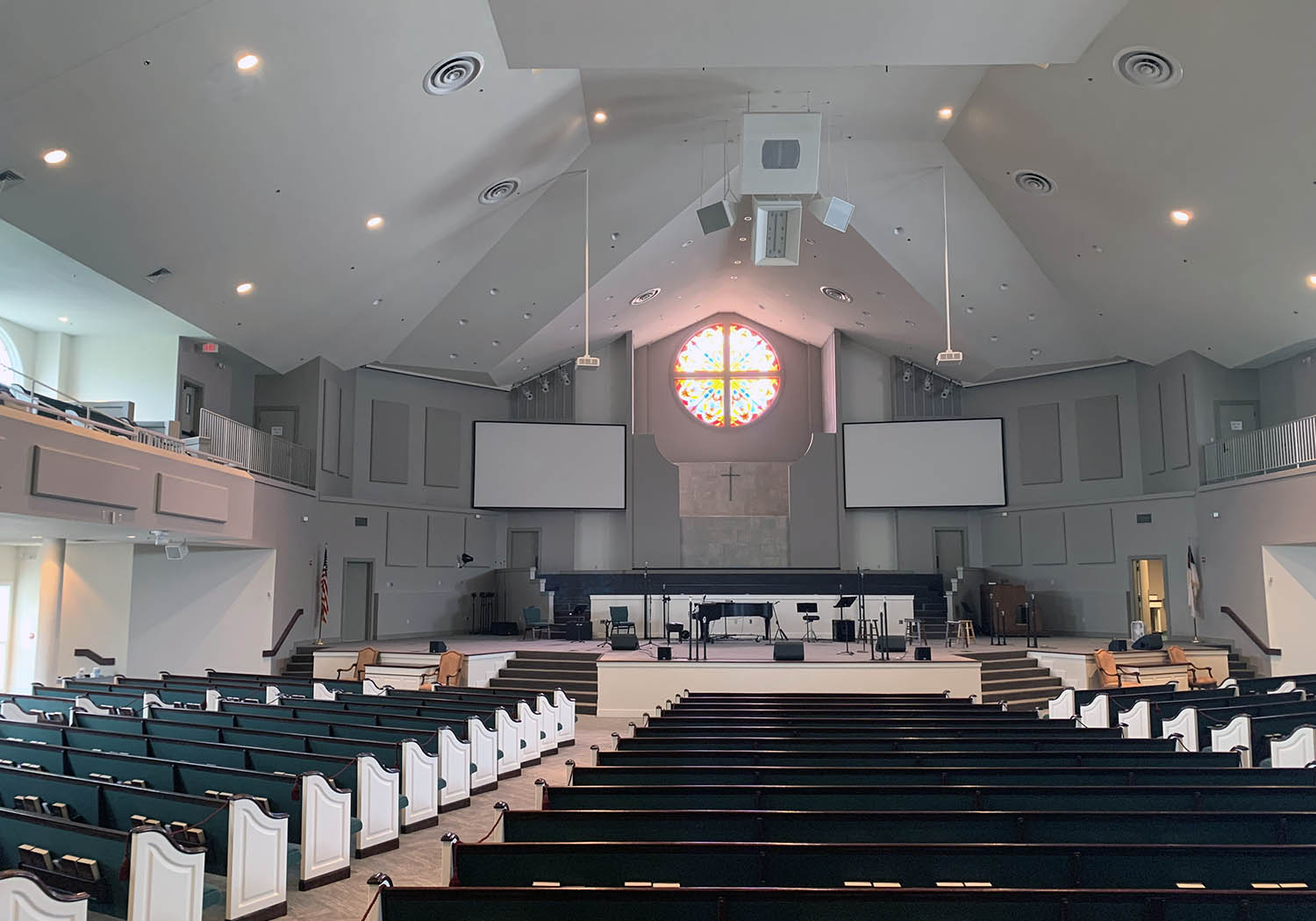 Great Bridge Baptist Church in Chesapeake, Virginia has an uncompromising commitment to reflecting God’s love and building loving relationships. Its contemporary-style services lift spirits with music provided by an orchestra, a choir, and a praise band. It’s a big production, but until recently, all of that effort only partially connected because the existing sound reinforcement system’s coverage of Great Bridge Baptist Church’s 1,500-plus seats was far from ideal. Regional AV integration firm RTW Media, based in Richmond – serving the Virginia/DC/Maryland areas – designed and installed a big-impact, small-footprint sound reinforcement system centered on Danley Sound Lab’s efficient point-source products. Using the patented technologies of acoustical maverick Tom Danley, the Danley boxes give Great Bridge Baptist Church remarkably even coverage from front to back and from side to side, in the balconies, under the balconies, and even on the stage and in the orchestra pit.

“The sound system at Great Bridge Baptist Church was old and tired,” said Zack Guida, operations manager at RTW Media. “The coverage was lacking, the timing was off, and it really didn’t do justice to the amazing services they are putting on. When we met with the church, they explained that not only did they want an impactful sound system, but they also wanted consoles and backbone technology to give them creative audio and video capabilities that would further allow them to connect with the congregation, both in person, and through digital media. The church’s vision included a video and camera system overhaul as well, so we had to be mindful of the overall budget. 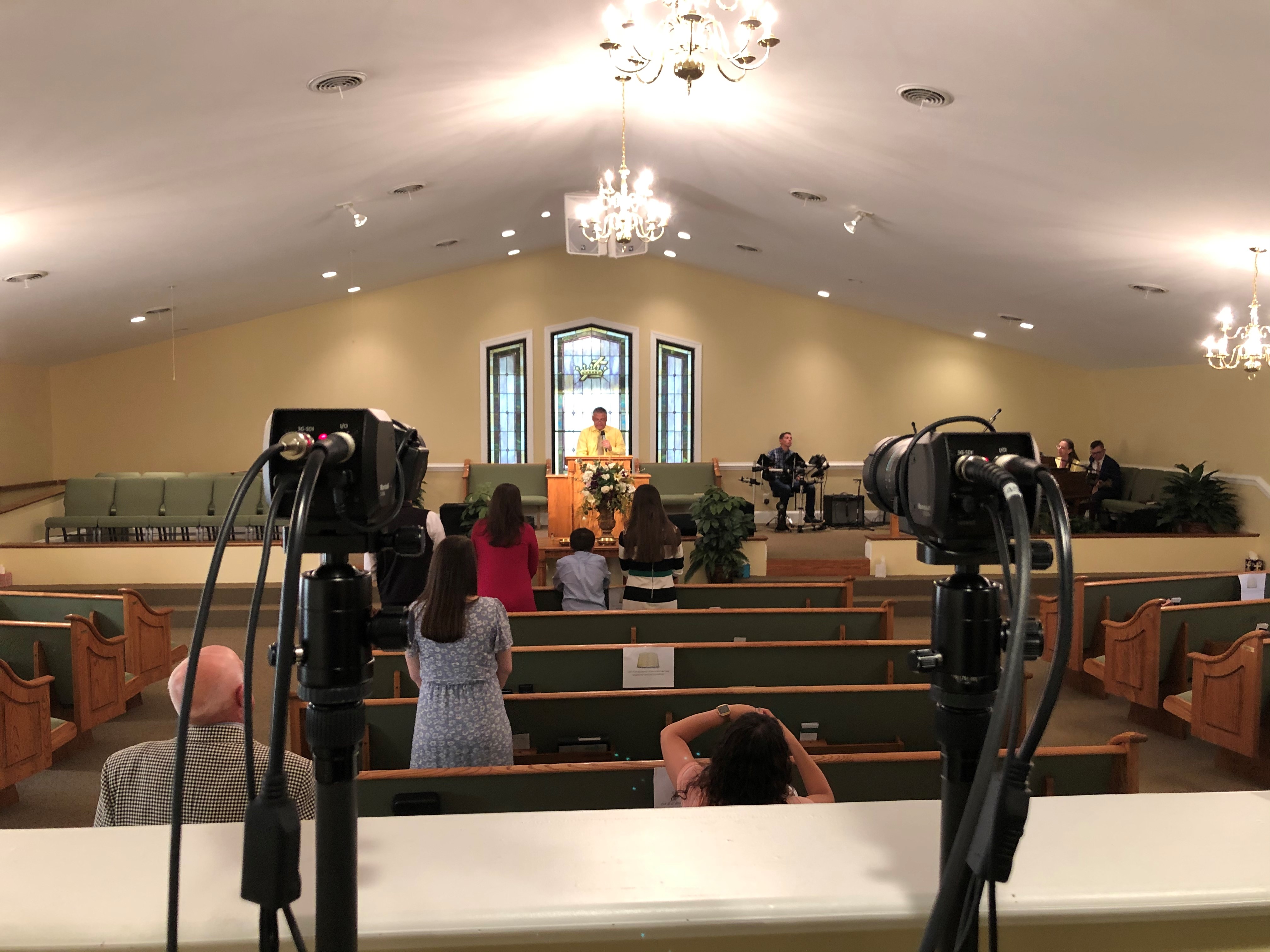 As CEO and founder of Leading Edge Multimedia, David Anderson utilizes state of the art and cost-effective production equipment to record and live stream sporting events, concerts, business conferences, house of worship applications, and much more for his clients’ various needs. Anderson was looking for an extremely small, easily transportable camera with superior image quality and reliable streaming capabilities and he found the solution he was looking for in the CV346 Compact HD Camera from Marshall Electronics.

Anderson first learned of Marshall cameras through an industry friend about four years ago and has been using Marshall ever since. “Today’s current situation has highlighted the importance of being able to successfully live stream productions from various locations for a multitude of applications,” says Anderson. “Marshall fits the bill really well because they are so small and yet their image quality is on par with much larger, more expensive cameras. The Marshall cameras shade so well that it is very tough for the untrained eye to tell the difference between many of the extremely expensive, large format broadcast cameras versus a Marshall camera.”

CCTV, in conjunction with Lawo China and video partner Acro-bright, worked in cooperation with China’s large regional system integrator, Beijing Yutian, to achieve this success, the latest in a number of joint Lawo / CCTV installations which include HD / UHD OB vans, audio SCRs, and studios in CCTV’s Beijing headquarters. 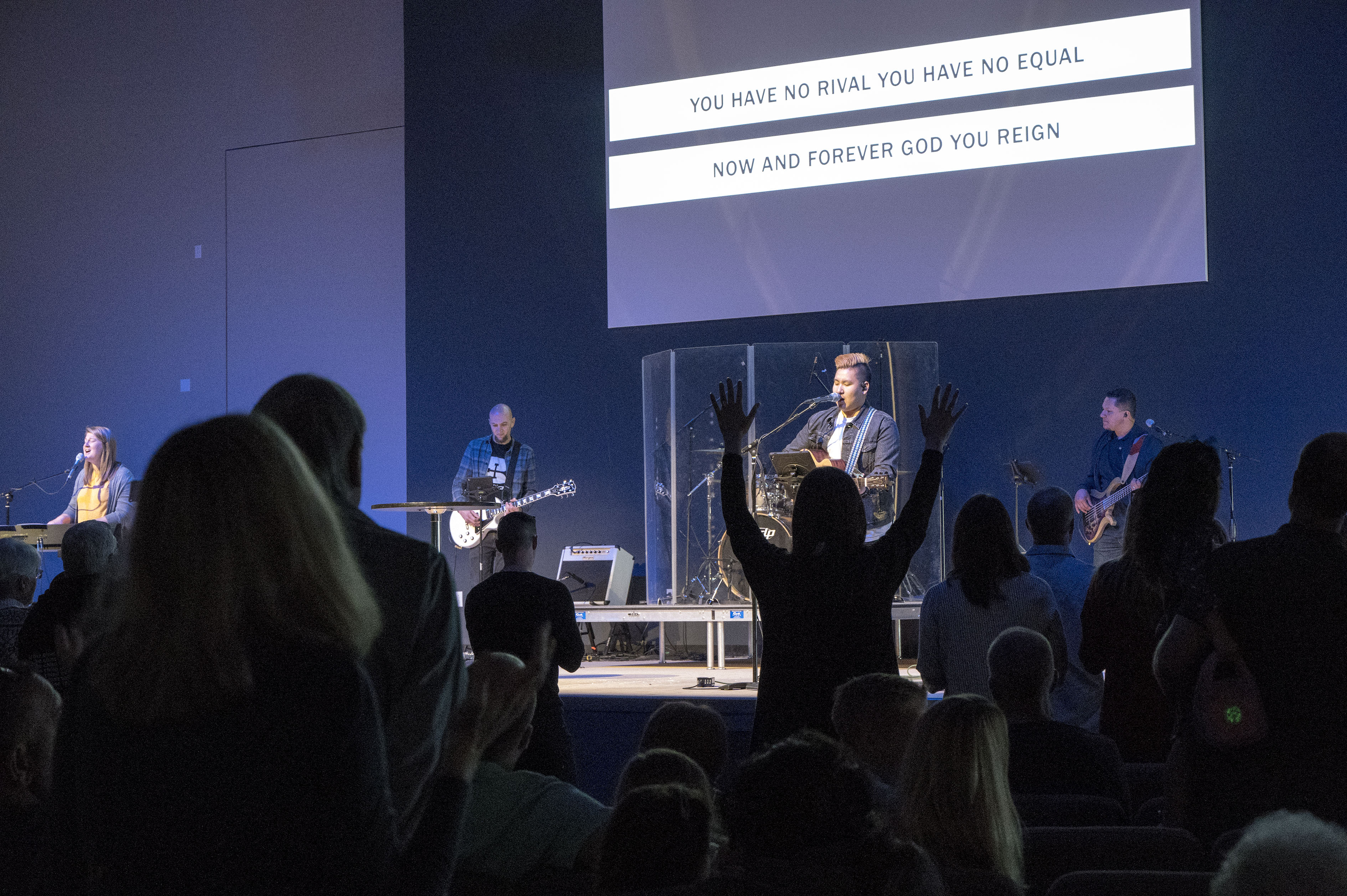 The Bridge is a multicultural and intergenerational church located in Chino, California. Over the last few years, the Church moved to a beautiful new, purpose-built facility, allowing for the build and installation of new systems, including upgrades to their AV and sound equipment.

Being a large church with a range of services and events conducted in English and Spanish, the facility’s systems are of critical importance. With the goal of delivering pleasing, intelligible music and spoken word audio with good coverage, local systems integrator TechArts, installed several sound systems built around network-ready amplifiers from LEA Professional.