For the last 2 months I’ve had the opportunity to use The WalkaBout Drum. I would assume that your first question is; “Why are you telling me about this product in a technical ministries magazine?” Well even though I’m going to focus on the features of an instrument, it is the first percussion instrument that has its own pickup and microphone already installed. No need to put a microphone on it, so I think it worth taking a look. Let’s go!

I first saw the WalkaBout at a church in Northern California, where it was being used during worship. At first I thought; “This has to be a joke, right!?” It looked like the percussionist was playing a broken acoustic guitar. But as soon as he started playing, I was impressed with the sound.

The WalkaBout Drum is a percussion instrument played similar to a Cajon. By playing it with your hands, the different parts of the body produces vastly different tones. The top-of-the-line Studio model includes the drum itself, which at first appears to be an acoustic guitar body with no neck (it’s really much more). It comes with a Sound Dot Snare accessory that you can place on the inside of the drum for a snare drum effect. It also has an LR Baggs DualSource Pickup/Mic System installed, so there’s no need to put a mic on it. A strap is included, and it comes in a Backpack/Hand Carry Gig Bag so it’s easy to carry with you.

When I received the drum I wasted no time opening the box. The SounDot Snare was in the front pouch of the gig bag, so I installed it right away. The SounDot is held in place by a magnet and can be installed in two different locations in the upper body of the drum. A few taps on the surface and it sounded just like a snare!

My natural tendency was to wear it like a guitar, but that’s when I discovered the flexibility of this instrument. I found it easier to play with the WalkaBout facing upward, sound hole toward the ceiling. I was able to play it quite easily both standing up and sitting down. This gave me a top just like a set of bongos or congas. It was also easy to reach the sides for different tones. I wear a wedding ring and this gave me even more sounds, as I used it to tap on the sides. Playing both with and without the snare achieved a variety of sounds and you can order an additional sound dot if you want snares in both available locations.

Since I play guitar, it was very natural to have the instrument around my neck with the wide part of the body on my right; however, if that doesn’t feel comfortable to you, turn it around as if you were a left handed guitar player. The drum is really flexible, and there is really no need to order the left handed version; just flip it around.

When the WalkaBout is plugged in, there are two controls in the sound hole. The top one controls the overall volume, and the bottom one controls the duel source feed between the pickup and the microphone. This is where it gets really cool! Without playing with tone controls on my mixer, I was able to get a wide variety of sound depending upon how I played, where I struck the drum and the adjustment between the mic and the pickup. Since the adjustments are right on the top in the sound hole, they are easy to adjust on the fly. I played the Walkabout for the better part of an hour, just experimenting with the sounds. I was first playing it like a Cajon, and guess what, it sounded like a Cajon, however playing with the mic/pickup mixer allowed me to get tones much like congas, even a very open sound like the heads on the drum ringing. 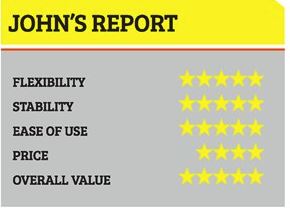 I really like what I hear when playing this instrument. It sounds awesome plugged in and can be certainly be a percussion instrument on any worship team either by itself, or playing along with a drum kit. Add the flexibility of bringing it on vacation, a picnic or to the beach and the Walkabout becomes an essential piece for your percussion collection. If you are a drummer, percussionist or just like to create “rhythm for your journey” take a look at the WalkaBout Drum. You can get more information on their website at www. walkaboutdrum.com