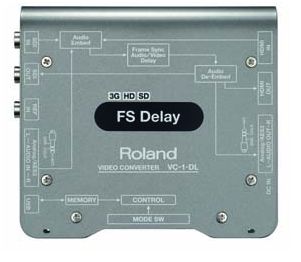 The VC-1 Video Converter series provides uncompromising picture quality by maintaining the video characteristics of the original signal with rich-blacks and super-whites. There are no interlacing artifacts or other conversion or signal errors sometimes found with other video converters. The VC-1 series also features an on-board re-clocker to compensate for attenuation of SDI signals carried over long distances. The VC-1 series also supports both level A and B 3G-SDI, letting you connect a variety of higher quality SDI sources.

The VC-1 series is HDCP compliant allowing you to convert or pass-through HDCP signals with the exception of any SDI output. The VC-1-DL additionally enables the HDCP signal to be delayed. Selectable audio embedding and de-embedding lets you route different audio sources to or from video devices. Digital AES/EBU input and output signals are supporting ensuring high-quality audio signals can be maintained through the signal flow.

Video devices with uncompressed signals such as SDI and HDMI have become more common in live production, and as a result, the need for video conversion is growing. Video converters are especially needed when audio and video signals are combined in a multi-device integrated system installation. Each different video component could add delay and therefore latency adjustments are required to sync audio and video signals. Roland Systems Group developed these single-function convertors building from the technology developed for the powerful VC series that includes the VC-300HD, VC-50HD, and VC-30HD.

Roland VC-1-HS- Increasingly HDMI video cameras are being used for live production. The VC-1-HS converts, extends and embeds audio from HDMI to SDI. This converter is especially complimentary to the Roland V-1600HD and V-800HD multi-format video mixers when you want to use SDI signals for camera inputs on the mixer.

Roland VC-1-SH – The cost of SDI monitoring sometimes can be prohibitive for certain applications. The VC-1-SH converter allows you to convert an SDI signal to HDMI, providing a more cost effective monitoring solution. This converter is also complimentary to the Roland V-40HD multi-format video mixer when you want to use an SDI camera as an input to the mixer.

Roland VC-1-DL – In live production as you add more video components to a signal flow, latency is introduced. The VC-1-DL converter not only allows bidirectional conversion of SDI/HDMI but it also provides frame sync and delay adjustment of up to 9 fields (4.5 frames) for audio and video independently. This is helpful when keeping various types of cameras in sync as well as ensuring a projector stays in sync with an LED wall. In this way it is an indispensable tool live production, broadcast and recording applications.