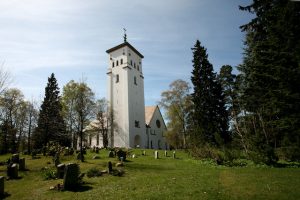 Oslo, Norway-August 2018… Built in 1932 in the Romanesque Revival style that became popular in the mid-19th century, Ris Church seats 500 and features a high wooden ceiling, stone walls, and a rear balcony. Unlike most such churches, Ris Church is oriented north-south because of the shape of its plot. Services are traditional in this landmark historic building, featuring a large French Romantic-style organ and a choir that performs from the steps in front of the apse.

“The acoustics were challenging at Ris Church because of its volume and hard surfaces,” explains Sverre Jøssund of Benum, Renkus-Heinz’ Norwegian distributor. “The main sanctuary is about 40 meters [131 feet] deep. We also encountered issues with standing waves in the lower frequencies.”

For the main front-of-house speakers, designer Amundsen chose a left-right pair of Renkus-Heinz IC16-RN digitally steered line arrays, part of the ICONYX Gen5 series. The IC16-RN features 16 4-inch coaxial transducers, each with 3 high-frequency tweeters, along with 16 amplifier and DSP channels. Each column can deliver up to eight steerable beams, which can be individually shaped and aimed using powerful, software-controlled DSP. Beam control is effective down to 400 Hz. At Ris Church, this enables sound to be precisely aimed at the congregation and away from the church’s reflective surfaces. The result is clear, intelligible sound throughout the space.

“Renkus-Heinz’ ICONYX series is very well known as an acoustic problem-solver in Norwegian churches and city halls,” Jøssund relates. “Together with subs or full-range loudspeakers like the CF151-5R, it makes great sound for almost any application. In a church where you need higher sound pressure levels for loud gospel music, we would suggest the IC Live series. But for Ris Church, with its more traditional services, the ICONYX Gen5 was the right choice.”