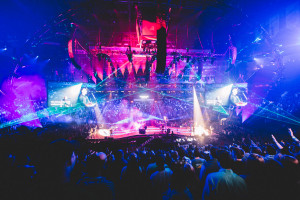 With spectacular staging, big-screen displays, theatrical lighting, all-encompassing sound and close to 20,000 spectators at every event, this year’s Passion Conference—Passion 2015—looked more like a major rock concert than a religious event. But the Passion 2015 event is actually three full days of music, inspirational speeches, video, lights and stagecraft designed to bring 18 to 25 year olds closer to Jesus Christ.

An annual event since 1997, the Passion Tour has grown exponentially, with this year’s conference presenting three separate events this winter to sold-out crowds at Philips Arena in Atlanta over the course of two weekends, and the Toyota Center in Houston. The Houston event was also streamed over the Internet, allowing roughly 40,000 more viewers to virtually attend this high profile, influential Christian event.

Passion 2015 leveraged world-class staging and multimedia technology, powered by Renewed Vision graphics and video playback software, to deliver the teachings of the Gospel and Christ with impact. While Christian musicians and inspirational speakers performed on Passion’s massive stage-in-the-round, a very intense, dramatic light show enveloped the talent. The stunning lighting effects included four ribbon lift platforms on stage that elevated lighting gear 30 feet high to shine down from above; a giant cross made of 90 red laser beams that floated above the stage; and bright LED lights shining up through transparent sections of the stage.

“Passion Conferences are exceptional events that strive to tell stories of the gospel’s impact on people around the world, and inspire action using the most innovative media production tools available,” said Brad Weston, President of Renewed Vision, maker of ProPresenter and ProVideoPlayer. 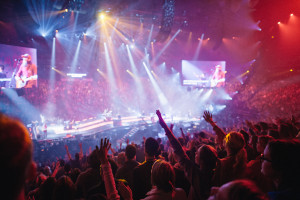 Two Renewed Vision video production systems played pivotal roles during the Passion 2015 events, held throughout the three-day conferences. During the live shows, Renewed Vision’s ProPresenter software delivered lower-third text, such as song lyrics and scripture, and graphical overlays keyed over live video to the six main LED walls in the arenas. The dynamic software platform also powered two lyric banners on each side of the arenas facing the stage.

ProPresenter also fed video to 12 confidence monitors on stage, which worship leaders and speakers used to keep the show’s pace and timing on-track. All three feeds—the main LED, lyric banners, and the confidence monitors—were separate, uniquely formatted outputs from a single computer, demonstrating the simple and cost-efficient architecture of a ProPresenter application.

Passion 2015 featured Christian music singers, such as Chris Tomlin, Matt Redman and Kristian Stanfill. According to Ed White, the Passion 2015 production designer, “The three-day shows had a production plan, but nothing was set in stone. Since set lists could change once the bands got on stage, everyone needed to be very flexible. Many songs performed were written just weeks before the show, creating the need for pre-vis work and a very flexible rig.” Lighting Programmer Trey Meares operated the DMX lighting console that was used to control the lighting, follow spots, LED monitors, ribbon lifts and lasers. 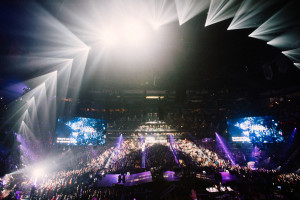 Considering the sheer magnitude of the production, one of the biggest challenges was to unload, construct and set-up the entire stage, lighting rigs and all the media equipment in just one day of pre-production.

“Once new songs are added to its library, ProPresenter doesn’t require any further pre-programming to begin displaying content,” said Shane Smallwood, Renewed Vision’s Sales and Support Specialist, who operated the Renewed Vision gear during the shows. “This is key for live worship events, where things often change on the fly and operators need to adapt quickly. ProPresenter is very stable, which is probably its most important asset. It would otherwise not be chosen for these demanding live Passion events, regardless of its features or ease of use,” Smallwood added.

ProVideoPlayer 2.0 was used for all video playout, including video clips, walk in content, interviews and featurettes as well as graphical elements onto the LED screens. Right before the shows, some videos were still being edited while others needed modification.

“ProVideoPlayer has a great user interface that lets operators drag and drop new content into it and play it back immediately,” said Greg Dolezal, Passion Production Team Lead and Line Producer. He added that “ProPresenter and ProVideoPlayer were developed specifically for use for Passion Conferences 15 years ago” and subsequently caught on with houses of worship, such as North Point Community Church, a mega church in Atlanta.

“As a group, the young people who attend Passion shows are more savvy than any previous generation. Not only are they inundated by technology and highly produced media, some even experience it at their own churches,” Dolezal said. “The challenge was to engage them with a memorable, never before seen media-driven show without detracting from the Christian message we were there to impart.”

The remaining video production infrastructure was supplied as part of TNDV’s fly-packs. TNDV provided a four-man crew to operate the Hitachi cameras, and set-up an ad hoc video control room under the bleachers that housed a 2-M/E FOR-A HD switcher, nVision HD router and AJA Ki-Pro Racks for recording to handle all aspects of the live multi-camera video show.