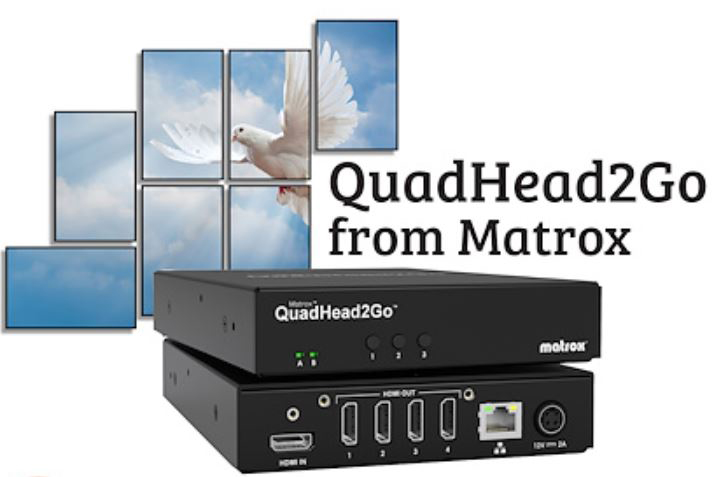 Go big or go home. There is no reason to continue using undersized video displays in sanctuaries when we have a huge variety of video source and control technology to manage lots of cameras, ProPresenter shows and supporting graphics. Even with video projectors dropping in price to compete with the influx of LED video walls, the choice was still limited to finding a big enough light cannon with a big enough lens to make a QuadHead2Go from Matrox big image in a rather bright sanctuary. Unfortunately, that was still a pretty hefty investment considering that by the time you found a unit with enough brightness to rival LED, you were also rivalling the price. The big monster projectors don’t have much of a future when small, super-bright projectors are becoming extremely reasonable in price, providing you can combine them to make a bigger image.

There is even less reason to stick with the standard 16:9 or 16:10 aspect ratios that form every rectangular screen since the birth of HD. Why not exercise your creativity in image layout? With Matrox’s new QuadHead2Go, you can take four inexpensive projectors and mount them, so the images are side by side, creating a stunning panorama of imagery. I’m not talking about 4 different images, rather a single image that spans across all 4 screens with precise alignment, delivering an image that is 7680 x 1080 pixels. Actually, the QuadHead2Go will allow any combination of two, three or four projectors (or TV monitors for that matter) in a 1×2, 1×3, 1×4 or 2×2 to create a conventional large screen, either horizontally or vertically. If you just use one QuadHead2Go.

That would be enough, but with Matrox PowerWall software, you can create artistic layouts, such as two projectors or monitors mounted horizontally (landscape), and the other two on their sides (portrait), still properly displaying the full image spanning the total area of the screens. If you happen to use big flat screen TV’s instead of projectors, the PowerWall software for QuadHead2Go will allow for compensation of the bezels. You are not limited to using four identical displays, since the QuadHead2Go can crop and scale to create a totally unique video experience.

Just plug in your source, and two, three, or four output devices like projectors or TV monitors. Power it up and press the front panel buttons to adjust the settings. The default setting will try to output to a 2×2 array of 1080P60 displays as long as it has any valid video input. Note that the QuadHead2Go is available either as an external appliance, or as a PCi card to plug into a PC’s expansion slot.

The QuadHead2Go has a grand total of 3 buttons. Press button one and the menu pops up on all of the screens, allowing you to cycle through a logo, a nature scene, bezel adjustment geometric grid, and red, green, blue and gray gradient full field screens. The next button allows you to select from 15 different screen combinations and layouts. The third button provides information and status so you can identify the screen ID’s, input and output resolutions IP address, MAC, serial and firmware overviews.

Ideally, you will want to start with source equipment that can output 4K images (3840×2160 pixels) although the QuadHead2Go is capable of handling 8K sources. The output is divided into 4 x 1080P60 signals. Want to get really big? Use 16 QuadHead2Go units with 64 displays or projectors. Why not?

I tested the QuadHead2Go with four LED TV’s and with two projectors side by side (because I only had two identical projectors in stock to play with). The QuadHead2Go detected my MacBook Pro’s 4K output instantly. It took me all of 30 seconds to set up the array of screens using the three buttons. Next I plugged into the two Panasonic Laser projectors, and with a couple of button presses, the image was correct. It was especially handy having the built-in convergence grid which allowed me to adjust the projectors so the transition between screens was seamless.

But how will it work in a church you ask? A static 4K image from the MacBook Pro looked amazing, but the next test was to see how it handled ProPresenter 7, which is the primary church presentation software. With Pro 7, I added the dual projector wide landscape array, which Pro 7 easily identified as a single screen. That took all of 60 seconds, not because I have experience—this was my first time using the new release of ProPresenter 7.

When ordering, you have a choice between HDMI and full-size DisplayPort input connections on the outboard appliance, while the PCi card has HDMI and Mini DisplayPort inputs. The outputs are conventional HDMI on both. Even though the popular consumer grade HDMI connector is the most unreliable connector since battery clamps, Matrox added threaded receptacles for locking HDMI connectors. This is a good compromise to keep the product as widely useable as possible while correcting the shortcomings of HDMI. After all, a church service is a “mission critical” event. 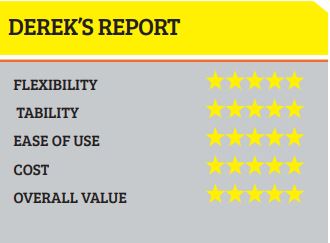 If you are using flat screen displays, some simple calibration will give you a uniform image across all of the displays. However, if you are using projectors, (this applies to any product driving multiple projectors), you will want to use identical projectors all with the same amount of past usage and lamp hours to ensure that your whole image is uniform. The goal of the QuadHead2Go is to make several display devices look like a single pure image. I am putting the QuadHead2Go at the top of my recommended products list.