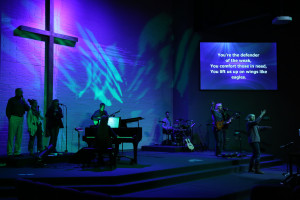 First established in the 1980’s, Centennial Covenant Church has continued to grow in the South suburbs of Denver and in 1997 they found their permanent home in Littleton, CO. Now 18 years later, the congregation found themselves in need of a complete architectural and entertainment lighting renovation. Working with Cuningham Group Architecture, the architect turned to The MH Companies to create their dynamic new lighting design, which consisted of 18 Showline SL PAR 150 ZOOM luminaires, seven Philips Selecon PLprofile1 LED luminaires, and a 250ML lighting control console from Philips Strand Lighting.

“We moved into this site a long time ago and with two services every Sunday and multiple events consistently taking place during the week, we needed a full lighting renovation,” explains David Dillon, Music Director, Centennial Covenant Church. “In the early stages of the design, the church was mainly looking at the architectural lighting, but we also needed to address the entertainment lighting as well. We were looking for fixtures that could provide great color and clean gobo patterns, and the lighting and controls package from Philips Entertainment is working great.”

“We had previously worked with the architect on the project, Timothy Kathka, and we knew he had a particular interest in energy-saving projects,” says Tom Seymour, Controls Engineering Manager, The MH Companies. “With a house full of incandescent PAR cans and a layer of HID’s that were part of the original construction, the old lighting was anything but energy conscious, so we really had to do a full renovation and Philips Entertainment had the perfect package of lighting and control.”

Seymour continues, “When we started talking about the entertainment lighting, I brought down two LED fixtures, the Showline SL PAR 150 ZOOM and a Philips Selecon PLprofile1 luminaire, for a demonstration to the renovation committee.  Since they were already familiar with using PAR type fixtures, I wanted to show them what these LED luminaires could really do and they were immediately impressed.”

The Showline SL PAR 150 ZOOM is a die-cast aluminum LED Par can that utilizes nine high-powered and homogenized 15 watt RGBW LED’s to produce over 3200 lumens of output.  The manual zoom provides a beam angle range from 15°-70° and the split yoke bracket allows for easy hanging or floor mounting.  The rugged construction, internal power supply, and ease of use make the SL PAR 150 ZOOM a natural replacement for conventional theatrical PAR fixtures by providing designers with the highest output and best color uniformity.

Dillon adds, “With our two services, we now do one that is slightly more traditional with a more static look, but then in our later service we create a contemporary worship environment with color changes between each song. We haven’t had any issues with the color matching and the fixtures are completely solid. What we set for on Thursday night rehearsals is exactly what we walk into on Sunday morning.” 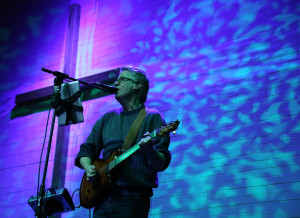 The PLprofile1 LED luminaire from Philips Selecon is a variable beam profile that produces precise beam control and pattern projection from a high output beam. Available in 18-34° or 24-44° beam angles, the PLprofile1 delivers the performance of a 500 watt profile fixture with a maximum power consumption of only 150 watts. With almost Infinite color choices from the RGBW engine and supporting color temperatures from 2700K to 5600K in white, the PLProfile1 LED delivers exceptional color and projection quality in a compact, robust luminaire.

Seymour explains further, “For their lighting control console, they previously had a two-scene preset desk. Since we were now replacing the old rig with LED fixtures we needed more control and the 250ML was the best option. With operators who were excited to run a system with LED fixtures, the intuitive nature of the 250ML was a great advantage and makes the system easy to program and run.”

“We do have a couple of volunteer technicians that have really taken to the 250ML lighting control console,” agrees Dillon. “They seem to be finding new ways to open it up and push the envelope with multiple scene changes and setting the perfect worship environment.”

“This type of lighting system from Philips Entertainment is everything that we like to promote,” adds Seymour. “It’s less maintenance, offers greater design flexibility, and it’s easy to run. At the end of the process, the local utility company was offering rebates for going from high-wattage lighting systems to an LED system. Based on their reduced power consumption, the church actually received a significant rebate, and seeing their services now, they are really making use of all their new tools with many wonderful transitions of color.”

“With our new lighting system, it’s a night-and-day difference,” concludes Dillon. “Previously, our worship services were static light with only an adequate stage wash. There was no creative color and the system was basically on or off. Now, we have a completely transformed system and it’s opened up a new ministry opportunity for someone with an eye for lighting to truly create on Sunday mornings.”