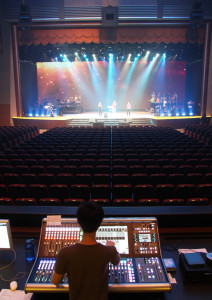 The services at Lighthouse Evangelism Woodlands in Singapore are being heard with new clarity thanks to the addition of two SSL Live. L500 consoles, one for its front of house duties and the other for monitors mixes. As Lighthouse Evangelism’s recording studio is home to a Duality SE, the choice of SSL for the sound system at the Woodlands venue was a natural progression.

With the help of SSL’s Singapore office, the two L500 consoles were delivered and installed by Managing Director Chan Kheng Wahand Live Marketing Manager Dominic Koh, who also facilitated the sale and are coordinating local training and support. The SSL consoles were chosen to replace Woodlands’ previous consoles and have delivered a significant sonic improvement.

“The difference between the previous consoles and the SSL L500s is like night and day,” says Rhey Ruiz, Head of Sound for Lighthouse Evangelism. “The microphone preamplifiers are amazing. We can hear so much more of our instrumentation, which has really contributed to the enjoyment and fulfillment that the congregation experiences at each service. What’s more, we record all of our services to multi-track, and the integration of the recording capabilities has been perfect. We can record directly from the microphone to the recorder without any filtering, which is something we were not able to do in the past.”

Lighthouse Evangelism Woodlands hosts various worship services throughout the week, accommodating as many as 4,000 people with an average weekly attendance of 15,000 congregants. The new SSL Live. consoles were installed in the Main Hall Sanctuary of the multi-level facility, which features a two-tier seating arrangement. The console used for front-of-house duties accommodates band instrumentation, choir and microphones for the pastors as well as for guests and congregants. The second L500, situated stage-side, serves as the monitor console. The two consoles share inputs from SSL stageboxes via SSL’s Blacklight II high-bandwidth, multiplexed MADI interface, which reduces the number of interconnecting cables between stage rack, FOH and monitor desks. The system additionally employs SSL’s arbitrated gain sharing.

Founded in April 1978, Lighthouse Evangelism continues to serve its congregation in English, Mandarin and other Chinese dialects.