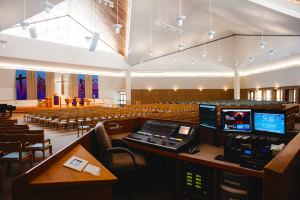 The mixing station in the sanctuary of St. Andrew Lutheran Church (photo credit: Charlie B. Ward)

St. Andrew Lutheran Church, located just outside of Twin Cities, Minnesota, started its congregation in 1975 with just 200 members. Currently situated in a massive and aesthetically spectacular facility, the church now has membership in excess of 6,000 people, making it one of the largest Lutheran churches in the U.S. During the fall of last year, the church called on Twin Cities Sound looking for a complete redesign of its sound system, including acoustical work, video and lighting elements. To help resolve power and intelligibility issues, Twin Cities Sound chose to incorporate Powersoft amplification to drive the entirely redesigned audio system.

While the interior sanctuary was aesthetically striking, the church staff cited intelligibility issues with the previous audio system, saying that congregants found it difficult to hear and understand pastor’s message each week. “When we went into there originally, the complaint was that nobody could understand what was being said,” says Brandon Levy, Manager of Twin Cities Sound. “It wasn’t a power or a volume issue, it was that nothing was intelligible whatsoever. Even when it was really loud, the congregation couldn’t understand the content sufficiently.” Levy and his crew created an entirely new system design for the facility, starting with taming the acoustic environment and then reorienting the sound system from a multiple point-source system to a predominantly center cluster system.

The acoustical work was the most intense part of the installation, and took six weeks. “The interior of the sanctuary is aesthetically beautiful, but from an acoustic perspective, it is an absolute nightmare,” Levy says. “Every wall is parallel, there are huge resonant areas, and the point system that was in there before just exacerbated these issues.” Twin Cities Sound proceeded to design and build custom acoustic panels — aesthetically identical to existing walls — to address the problem areas. Following that, they upgraded St. Andrews’ projection systems to new, high-end Panasonic units, which project onto two 12′ screens positioned on the left and right sides of the stage.

As far as the audio integration is concerned, there were three primary sources: the pastor’s pulpit, located in the middle in front of the sanctuary, then a band of musicians to the right and a 70-person choir positioned to the far right. The team chose to focus the system on a center cluster of (8) RCF TTL33 passive loudspeakers, with a left and right ”fill’ cluster consisting of (3) of the RCF units. “We mounted passive loudspeakers because of the space limitations we faced to get the system where we needed it,” explains Levy. “The drop from the ceiling was about 24′ — and to drop enough electricity for all those clusters wouldn’t have been visually pleasing.”

After the passive speakers were implemented, the power runs were approximately 240 feet, so Twin Cities Sound had to choose an amplifier could meet the requirements of the RCF cabinets, but also handle extremely long cable lengths with no performance loss. “Including wire loss, we needed the amplifiers to handle 1,000 watts at 8 ohms per channel to get it done,” says Levy.

The Twin Cities Sound team had ‘once chance’ to get it right: “This really needed to sound excellent. The church put a lot of effort into its fundraising to provide a budget for this system, so there were no ‘do-overs’ or tweaking, so we had to nail it the first time,” says Levy. “When we started to look at the Powersoft amplifiers very seriously, we were impressed. Not only because they gave us a tremendous amount of power, but the power that was advertised tested out in our shop — this is often not the case with other manufacturers”

(14) Powersoft K2 amplifiers were specified for the job, one amplifier per cabinet. “Each of the loudspeakers are bi-amped, and we are sending one amplifier to each box: high and low,” explains Levy. “If we didn’t go with the Powersoft unit, we would have had to buy more amplifiers, plain and simple.” 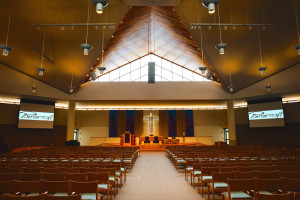 Powersoft K2 and Armonia: Coming Through Loud and Clear

While the choice of passive speaker cabinets ultimately saved space, it also meant that they could not utilize built in DSP features in the back of the array. Powersoft soon came to the rescue with its Armonia Pro Audio Suite™. “When we were considering amplifiers, DSP features were very important,” Levy says. “The competitor units all had pretty good DSP systems, but when we looked at the Powersoft Armonia, it gave us a lot more options than we were expecting. It also allowed us to link amplifiers so line arrays could share ins and outs while keeping the DSP settings in line, which was appealing. We didn’t have to wire everything, we just ran CAT5 all the way down.”

Implementing the Armonia was seamless and also a time saver: “The Armonia is very easy to use and we didn’t have to work to hard to get the system sounding great. The gauging and control that Armonia has is really quite impressive, and the metering is great, as is the input / output management. We have been very happy with them so far,” says Levy. The clear metering on the Armonia helped the crew tune and time align the system, which Levy says only took an hour or two before it was sounding just right.

The Gift of Intelligibility

The installation was completed just in time for Christmas, when the church was planning on having no less than (10) services that were going to be filled to capacity. Given the tight deadline, Twin Cities Sound staffed the audio system for St. Andrew and ran audio for the event. The response surprised even the audio team. “After the services, we literally had lines of people coming up to the sound booth congratulating us and telling us how happy they were with the system,” recalls Levy. “The feedback was overwhelmingly positive.”

Interestingly, many of the assistive listening devices that are at the counter where patrons pick up their service programs are not being used. “People are telling us they don’t need them anymore. Everything in the sanctuary is crisp and intelligible, and also sounds very natural,” says Levy. Despite the enormous challenge of migrating from a multi-point to a center cluster oriented system, Twin Cities Sound was able to maintain the aesthetics of the sanctuary without anything visually obtrusive.

As far as the audio is concerned, Twin Cities Sound couldn’t be happier: “Powersoft came through for us,” concludes Levy “We are very happy with the amplifiers and everything they did. This was our first big order with Powersoft, and before we even paid for the units, they had arrived. Everything tested correctly and we never ran into any issues whatsoever.”