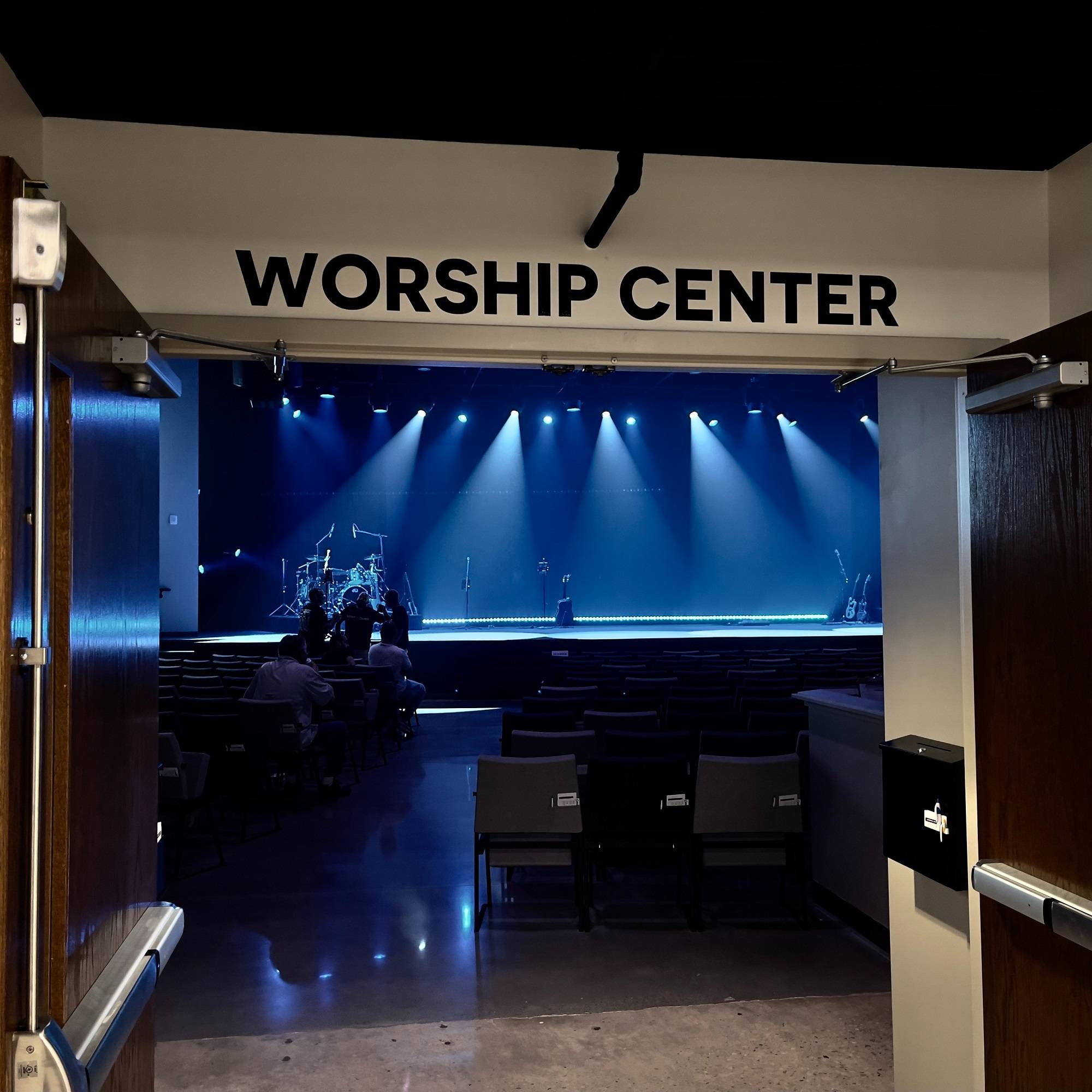 When Lighthouse Church’s main building laid in ruins after Hurricane Michael ripped through Panama City Beach, Florida in October 2018, parishioners were forced to meet in the church’s children’s building until a more suitable space was found. That new location, a former theater that was gutted and extensively renovated into a new campus and Worship Center, opened in early June of this year to both relief and celebration.

Riggins, who was once on staff at Lighthouse Church, says the ministry had dreams of being a technology pillar church in their area with modern streaming and broadcast systems, including the lighting needed to support them. “We designed a package that gave them a variety of washes, beams and battens, plus house pendant lights,” he states. “We went heavy on the Fuze series. They’re great lights for the price point and they accomplished the mission well.”

House lighting
One of the boxes the church wanted to check, besides quality lighting for broadcast, was a dynamic house lighting system, something the church had utilized in their previous building. “It worked well for their style of worship in the old space so it made sense to carry it into the new space,” Riggins said, adding that the house lights at their previous location were not up to snuff. “They wanted to maintain the look but with a more modern product that worked well any time they needed it. We were able to achieve that with the Fuze Pendant.”

Hero of the rig
In a church setting, where the goal is to move the audience to participation in worship or message, the need to feel connected and engaged is important. “The creative use of dynamic house lights can reinforce the service and engage the audience to participate in the experience,” says Riggins. “And of course, they also raise the aesthetic of a space.” With that in mind, some 52 Fuze Pendant downlighting fixtures were installed over the seating at Lighthouse Church. Housing a full spectrum 230W RGBWL array and capable of color temperature adjustments from 2,000 – 10,000K, they can wash the entire room in high CRI white light, pastels or saturates. Silent with no fans, output is up to 11,000 lumens.

“I think the Fuze Pendants are the hero of the entire lighting rig,” Riggins remarks. “The whites are really nice, there are no harsh spots and the color saturation is really deep and warm. There is really even coverage across the entire space.” He says that personnel at the church can easily change the vibe of the room and bring the feel from the stage all the way to the back row. “We really got everything we asked for out of the Pendant lights.”

“From a volunteer perspective, we wanted to get them enough variety of lights where they could use them successfully but also give them the flexibility to change the stage around if they wished as they do that quite a bit,” stated AVLX’s Erik Parker. “It’s a very active church and because they engage a lot with the community the space will be used for a lot of different activities. Giving them a flexible system that is easy to use will be a great benefit to them as they expand use of the stage to different activities, plus it just made sense.”

Both the Fuze PAR Z175 and Fuze Wash Z350 use single-source RGBW COB color mixing that gives an extremely homogenized field of light without the multi-shadows created from traditional LED wash fixtures. They are also unique in that their lens face appears as one color instead of individual LED diodes for more classic wash looks. Both luminaires also house zoom systems. “The wash across the stage is incredibly even and the light coming out of the lens looks fantastic. I love the ability to tighten up the Fuze Washes or make them really wide.”

Manufacturers’ rep firm and Elation dealer Freed Sales played an important role in working with AVLX on the project. “Another reason we work with Elation almost exclusively at this point is that we know if something goes wrong our rep will handle it and we’ll get a quick response,” says Parker, adding. “It’s always the best-case scenario when we need to contact Chuck Dillingham at Freed Sales.”

Like one he always envied
With new state-of-the-art entertainment technology systems, Lighthouse Church’s Worship Center operates as a full functioning venue that can effectively serve a wide variety of needs – live broadcast, special event, conference, play, or concert – as well as the ministry’s weekly services.

“It was a fun project and we love the way it turned out. We were happy to help bring the room back to life and launch them into a space that I think already feels like a home to them,” says Riggins, who concludes with a short anecdote. “When we were about to do doors for the first service in the new sanctuary, the client pastor said it felt like he was at a much larger church, one that he has always envied. He said it was more than he could have dreamed of so it was a very happy outcome.”