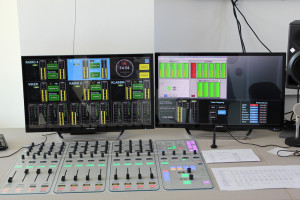 The move took place in several stages, moving the studios and installing Lawo equipment in its new premises for radio production, as well as for the networking the complete building. In addition to a central Nova73 HD router, ERR has also adopted five crystal and eight sapphire radio broadcast consoles. This has given dramatically increased flexibility and efficiency over the previous setup in the old building. With its new Lawo technology base, ERR has taken the step from analog into a completely digital environment.

Vytautas Martinonis, Head of Radio Technical and Sound Recording Department, is very pleased with the results of this modernization: “After consulting with other radio stations all over Europe, we were in a position to define our requirements very precisely – and Lawo won the official tender due to the advanced technology and the price for both points it scored highest. Now we have efficiency and flexibility in our workflows we never had before.”

In the main control room, a 12-fader sapphire radio console is used as a broadcast mixer for the management of the five radio programs, and additionally will be configured for switching the scheduled studios. The studio complex is designed as a multi-purpose studio for panel discussions, meetings and general recordings and, due to the networked infrastructure, can be used by each program.

The first station to go live from the new studio complex was Raadio 2. This involved three control rooms, each with a 16-fader Lawo sapphire console for production. The first of its programs was aired on 18 December, the date reflecting the birthday of radio in Estonia in 1926. The other stations – including Viker Raadio, Raadio 4 and Klassika – moved into the new studio complex between February and April in 2015. A fifth station, Radio Tallinn will soon join them using the main control room, and broadcast from there.

Vytautas Martinonis raises another issue that is important to him: “Presently, we benefit from the redundancy, flexibility in configuration, efficient use of resources and facilities from the Lawo equipment. In the future, this solution will allow us to expand simply by integrating the installation into our IP infrastructure using the AES67 compatibility of its RAVENNA IP technology.”

For additional information, please visit the company online at www.lawo.com