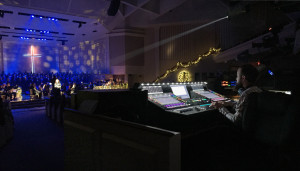 Central Church of Charlotte, NC is one of the latest Houses of Worship to become a “House of DiGiCo,” as its media director testifies that services have never felt so inspirational, easy and intuitive to mix since installing its first SD5 console in the church’s main sanctuary a year ago. In addition, new DiGiCo boards have now also been installed in its Student Life Center (SD8 and SD9) and Family Life Center (SD11) facilities.

Don Kendrick, Central’s director of media services, notes that a second SD5 will also soon be going  into a new audio/video suite, designed by Dallas-based Russ Berger Design Group, which is currently under construction and slated to be completed in the first quarter of 2015.

“I love the way these consoles are laid out,” Kendrick explains. “DiGiCo desks are obviously designed by engineers that have done lots of live mixing. Unlike some consoles that feel like mixing on a computer, the DiGiCos are laid out in such a way that you can get to layers to make adjustments on things without losing control of your main faders. And you can see everything you need at a glance. All the custom macros really help and are very easy to create, and we’re starting to use fader spill in our Student Life Center, which is nice for quick console layout changes for different services.

“The learning curve was a breeze as I was familiar with DiGiCo having used the D1 when we toured in Spain. DiGiCo consoles are so much like working on an analog desk that it really makes the learning curve pretty quick for anyone who has mixed on most any console.”

Kendrick originally came across the SD5 while attending a DiGiCo Master Class session at SE Systems, Inc., which has a showroom in Charlotte. “I saw the SD5 there and wow!” he enthuses. “It was a perfect match for us. DiGiCo knocked it out of the park with this desk. It has all the main features of the SD7 without the extras we didn’t require and is really the best console to fully meet our main sanctuary’s needs.”

Central Church’s second SD5, which has one SD-Rack and will share the other SD-Racks in the main sanctuary, was purchased with the Waves SoundGrid package for the audio control room. Kendrick says he will likely also be adding the “B” broadcast upgrade to the SD5 going into the new control room.

Kendrick further explains: “In the main sanctuary and Student Life Center we are using the MADI outs to feed JoeCo units for virtual playback which really helps with offline tweaks and for training. We are also using a MADI out to feed Roland M-48 stage mixers for the band. In the sanctuary, we have 16 M-48s: 15 on stage, and one at FOH to monitor the stage mixes when needed. I am using two MADI outs to feed two JoeCos for 112 tracks off the SD5 and the third MADI out to give me 40 matrixes of anything I need off the SD5 to send to the M-48s on stage. This really helped with giving everyone on stage what he or she needed without having to go to a separate stage console. We are running eight stage monitor mixes and four in-ear systems, along with the 15 Roland boxes, all from the DiGiCo SD5 at FOH.”