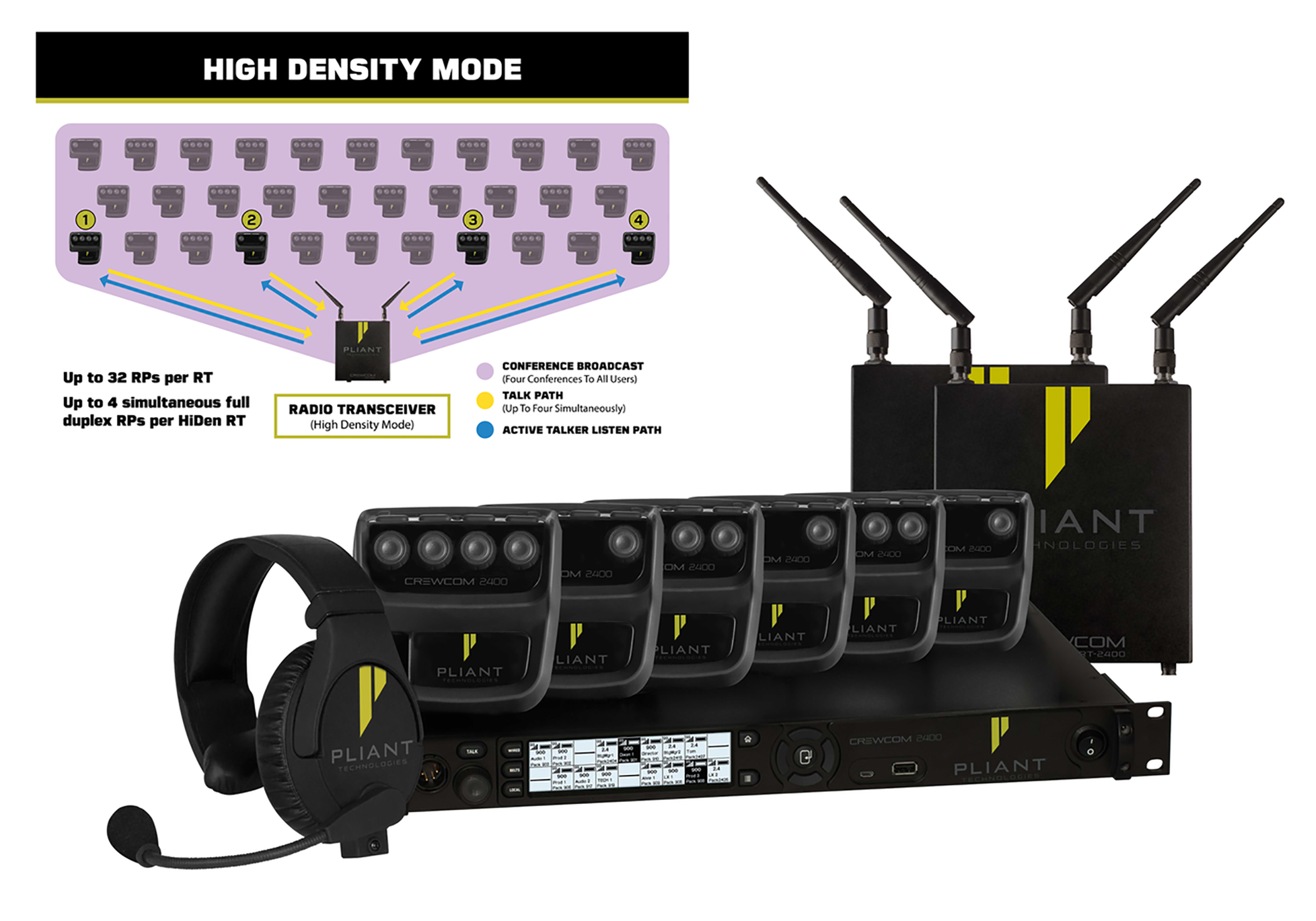 Topping the list is the addition of a new High Density mode, which is a selectable mode of operation that allows user densities to increase by more than five-fold. When implemented, this new software-selectable mode supports up to 32 Radio Packs (RPs) on a single Radio Transceiver (RT) while allowing any of the RPs to communicate using four available full-duplex talk paths. In addition, users will have the flexibility to simultaneously deploy “Normal” mode-enabled RPs and RTs along with High Density mode-enabled hardware, providing ultimate adaptability for application-specific setups. 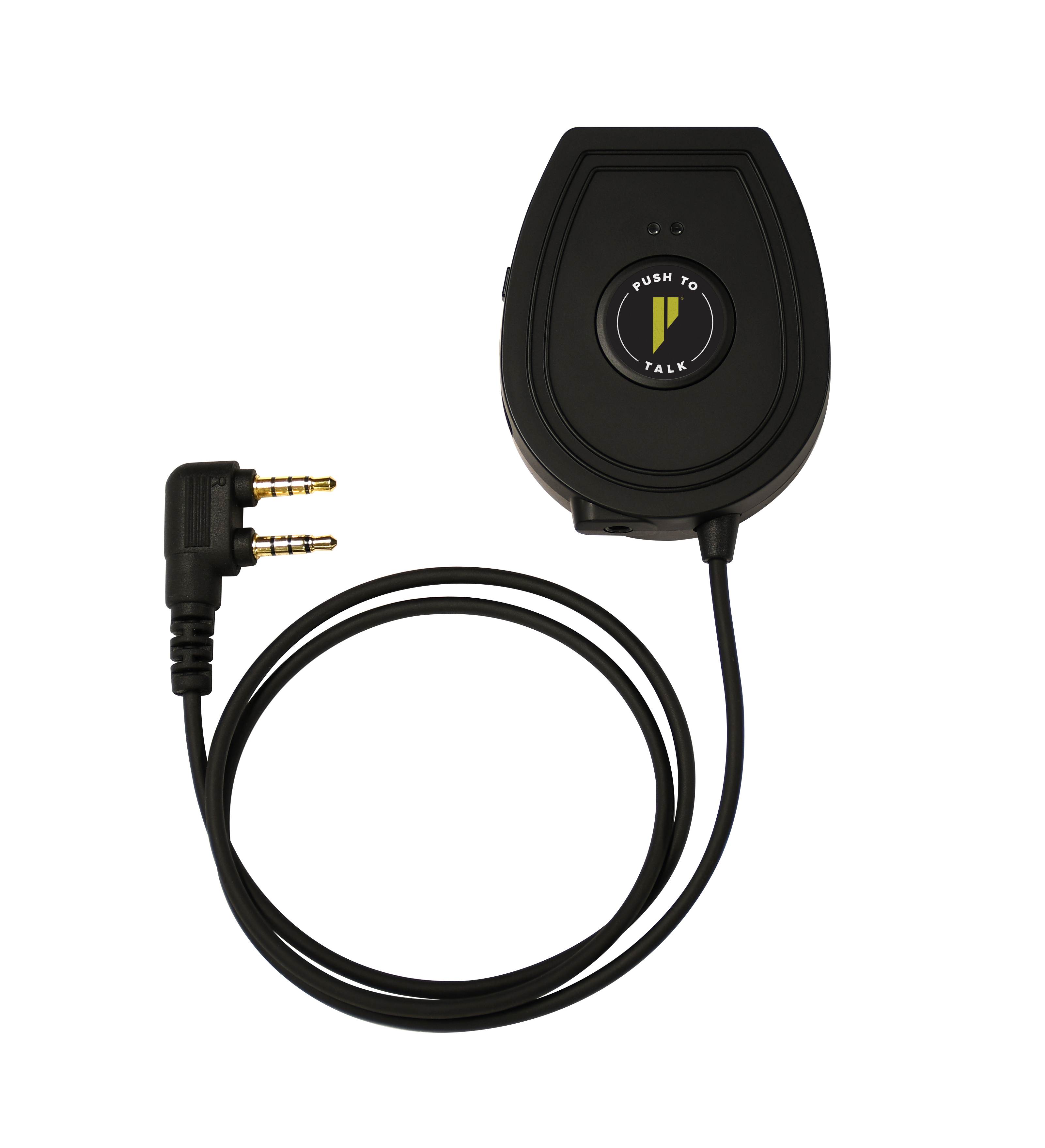 “We have been receiving very positive feedback from our MicroCom XR wireless intercom customers since its launch last year,” says Gary Rosen, Vice President of global sales for Pliant Technologies. “An outstanding feature for MicroCom XR users has been the system’s ease-of-use and flexibility. With the new 4-wire I/O and two-way radio interface capability, we have enhanced the system’s flexibility with a user-friendly solution that allows anyone to interface to a 4-wire intercom system, or to simply interface with a line-level analog audio connection with MicroCom XR.”

In a strong move to support the next generation of live event professionals, Riedel Communications teamed up with Backstage Academy to provide hands-on training using the latest equipment. Students in the three-year Backstage Academy training program are fully immersed in the work of live event production. Working alongside highly respected industry professionals, they use best-in-class equipment — including Riedel’s Artist and Bolero intercom systems — in state-of-the-art studio spaces to hone their skills in creating exceptional live experiences.

“We’re training tomorrow’s professionals, so it’s important that we get the best and most current gear in front of these students,” said Backstage Industry Partnership Director Miles Marsden. “We’re proud that our students graduate with cutting-edge skills, immediately ready to fill any shortages in the industry as it bounces back to pre-pandemic levels. Our close partnership with Riedel helps make this possible.”

Founded by a group of families committed to doing church differently, Auburn Community Church (ACC) is a non-denominational worship center that hosts both in-person and live-stream services for a diverse … 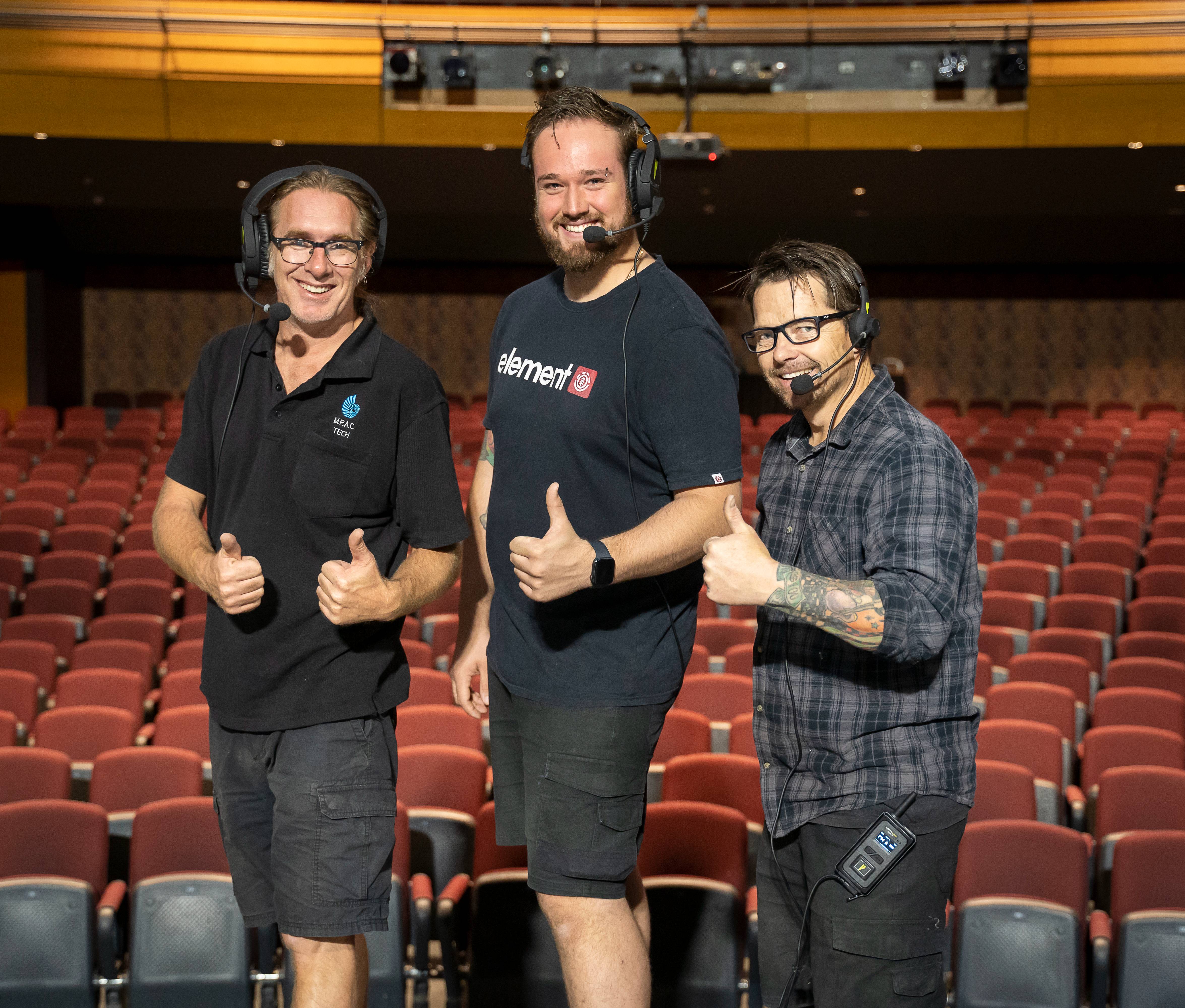 Mandurah Performing Arts Centre, also known as ManPAC, is a national leader in the curation and presentation of quality arts and cultural experiences that appeal to local artists and the community as a whole. Head of Staging Ciaron McCormack relies on Pliant Technologies MicroCom XR digital wireless intercom system to provide production staff with a dependable communication solution to put on ManPAC’s high-quality events.

“As head of staging, it’s my responsibility to make sure everything is organized for our clients so that their production runs as smoothly as possible, both on and off the stage,” says McCormack. “Pliant’s MicroCom XR, paired with the brand’s SmartBoom headsets, allows me to provide the crew with the tools they need for clear communication between the front of house and backstage areas.” 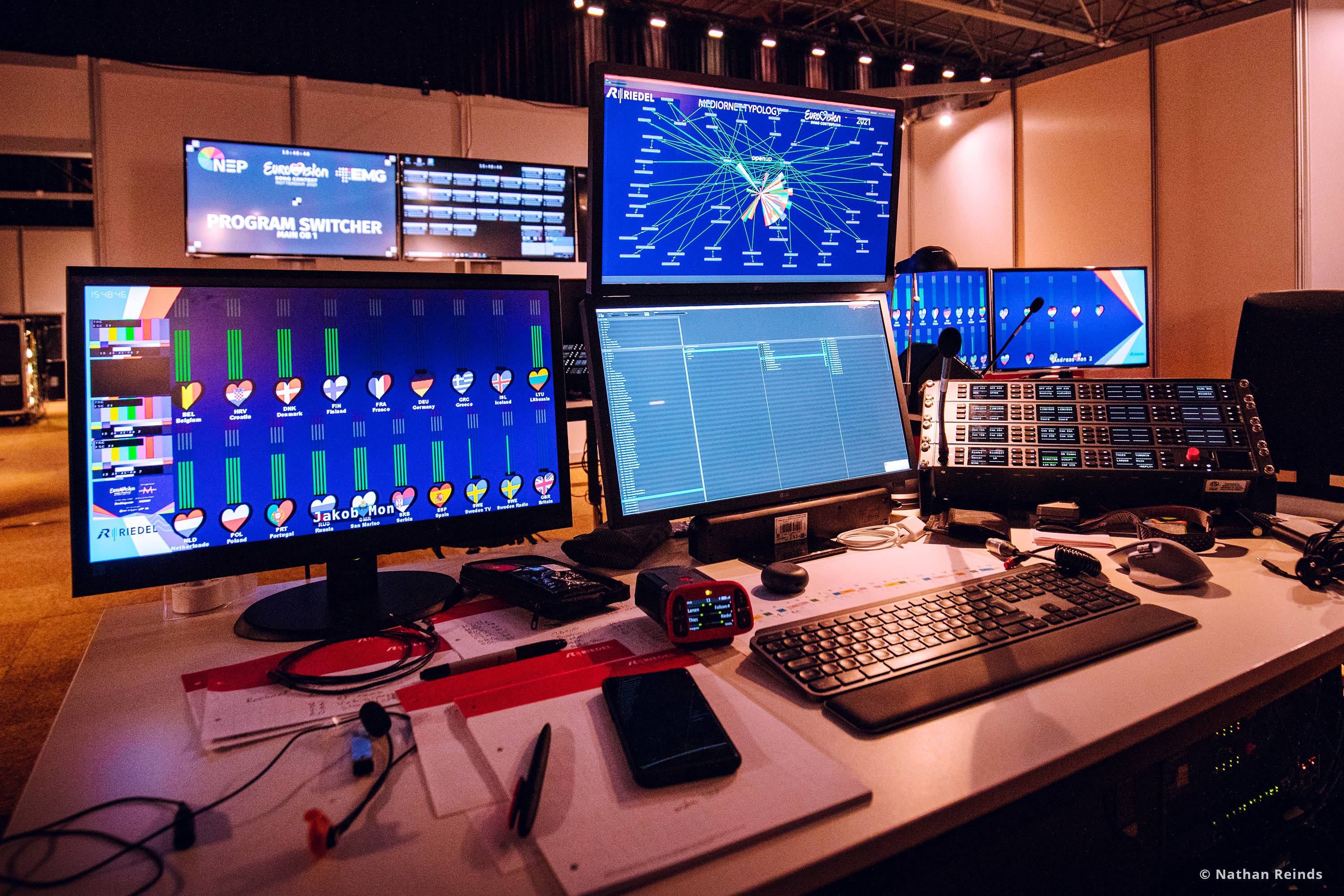 Back after a pandemic-induced cancellation in 2020, the 2021 Eurovision Song Contest drew an audience of 183 million viewers across 36 markets — with a live audience for the Grand Final show on May 22 that was an estimated 4% higher than that of the 2019 competition. Riedel supplied a complete solution that included not only intercom and signal distribution, but also accreditation, access control, commentary systems, and a comprehensive IT infrastructure for staff, broadcasters, and attending press members. 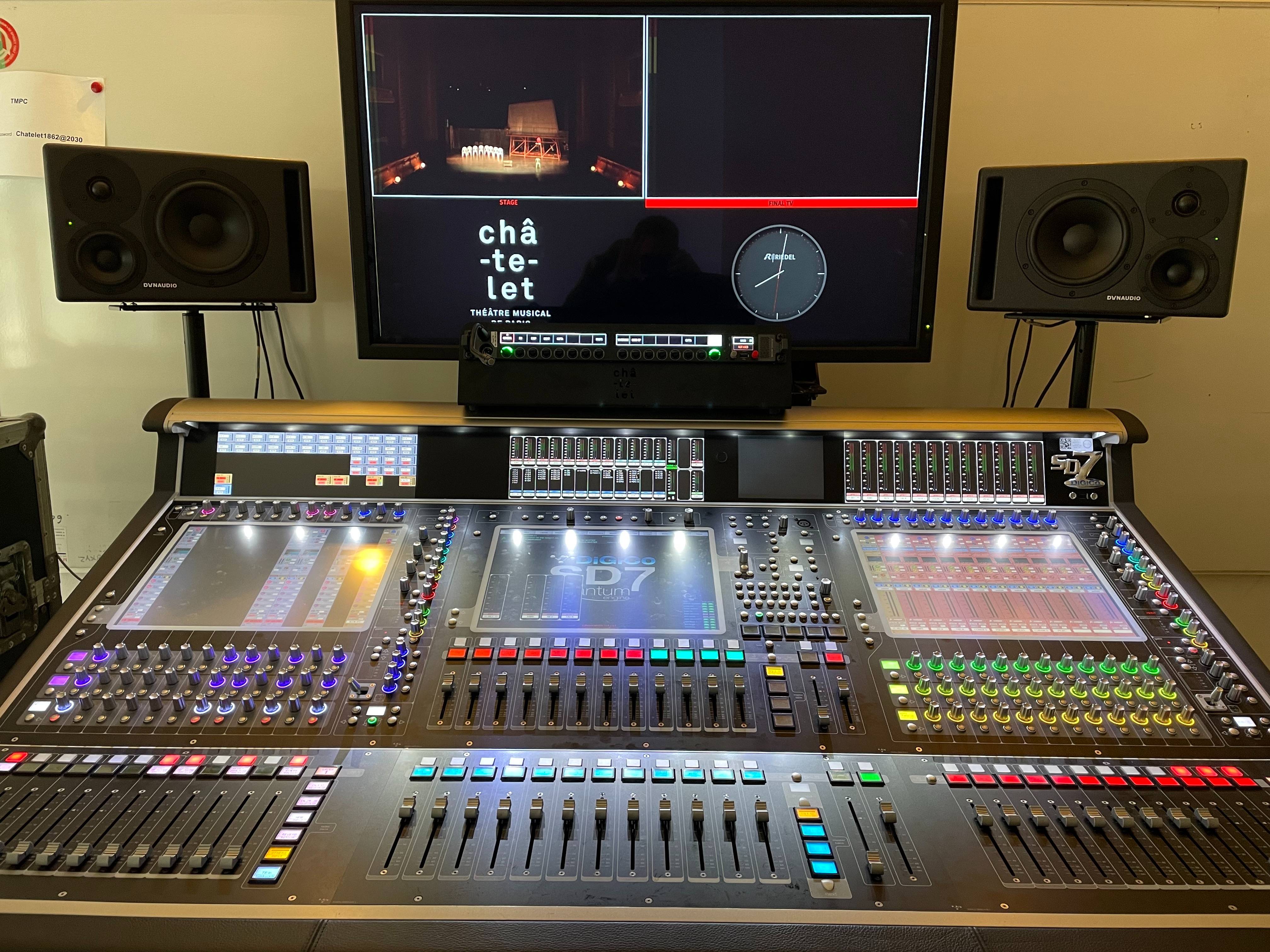 Located in the 1st Arrondissement on the banks of the Seine, the Théâtre du Châtelet was built on the site of a small fortress and opened in 1862. In its current configuration, the auditorium seats 2,038 people and plays host to a broad range of opera and theatre performances, concerts, and events such as galas and award ceremonies. The Théâtre du Châtelet recently underwent a major renovation, including an update of the entire networking and communications infrastructure, and settled on the Riedel solutions after an exhaustive evaluation process. 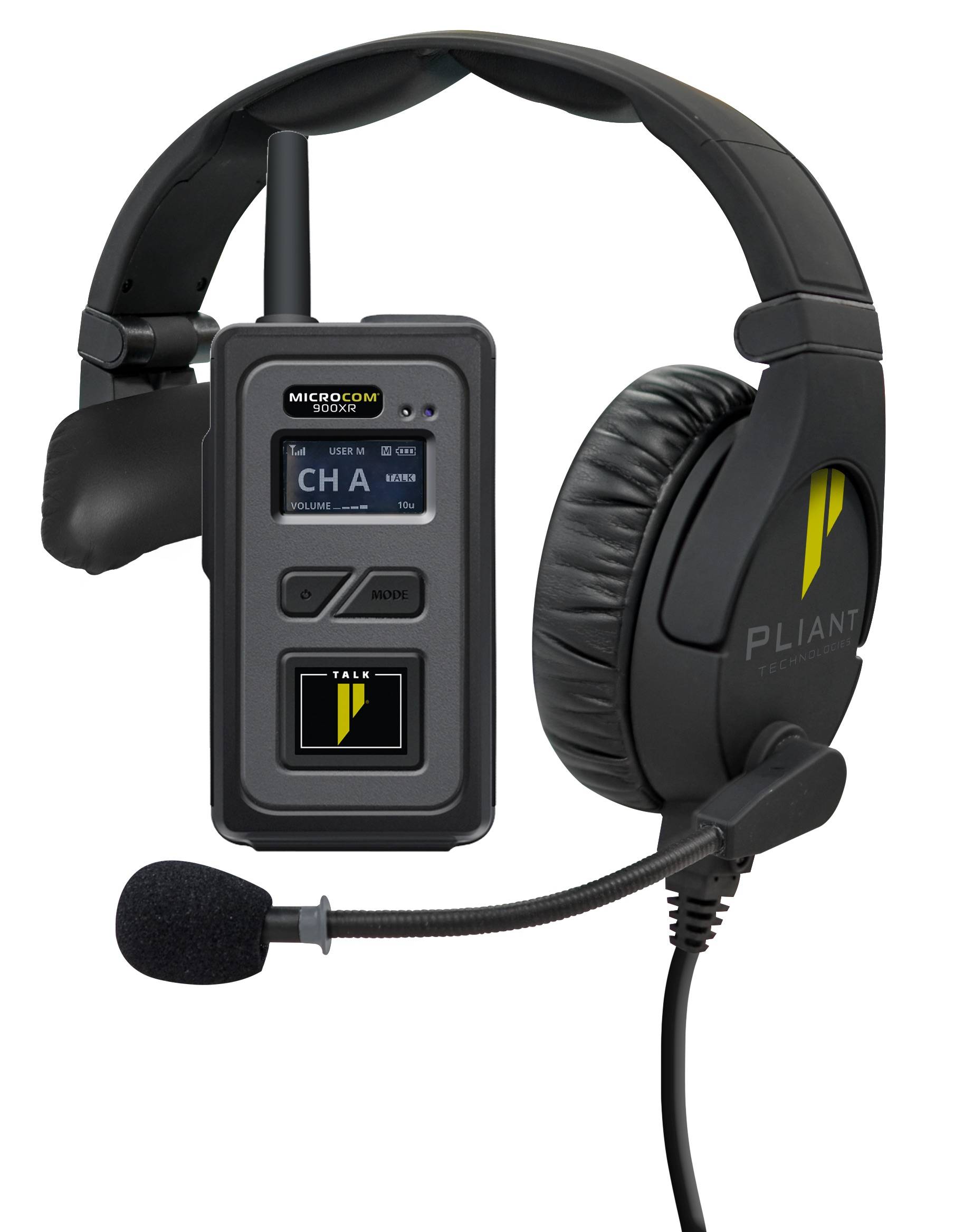 “We are excited to announce that new features are now shipping with the MicroCom XR wireless intercom system,” says Gary Rosen, Vice President of global sales for Pliant Technologies. “The new Repeater and Roam modes, as well as the MicroCom 900XR Receiver, have been specifically designed to enhance production workflows, ensuring uninterrupted, clear communication between users, all at a groundbreaking price point.”

Clear-Com’s latest updates to its HelixNet® Digital Network Partyline and LQ® Series of IP Interfaces builds on the company’s reputation of incorporating user feedback into product development in order to continuously improve its product offering, delivering key improvements on both platforms.

The HelixNet 4.2 Firmware Release adds visual communication, two-way radio capability, and a powerful suite of new capabilities for intercom system administrators looking to tailor intercom stations to specific user workflows. LQ IP Interfaces have the unique ability to connect to any type and brand of intercom or audio device over IP, and the new 4.2 update now adds the ability to Save & Restore LQ unit configuration.

New function features include an “In-Use-Tally” to visually indicate talk activity on individual channels, allowing users to quickly correlate what they hear on their intercom station with individual channels, while also providing a visual cue to those who have removed their headsets or may not be listening.