Designed by Anchor Audio, Inc. based on industry demand The Bigfoot® Line Array, the loudest and most powerful battery powered PA ever engineered, will debut this June at InfoComm 2015 …

“The Yard Master 2 is a lightweight, indoor/outdoor portable projection screen with a folding-frame, design for easy assembly on the go;” said David Rodgers, Marketing Manager for Elite Screens. “It … 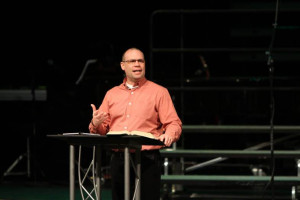 Looking for a solution that would allow them to more easily mic pastors and performers of all statures, the audio team at Christian Church of Clarendon Hills (CCCH) recently turned to DPA Microphones’ d:screet Necklace Microphone. This marks the first known HOW application for the company’s latest miniature mic, which recently won a TEC Award. In addition to its regular services, the church lends its auditorium to local schools for concerts and events, so the audio team also keeps a supply of DPA d:fine 66, d:fine 4066 and d:screet 4061 miniatures on hand.

Initially trying the DPA d:screet Necklace mic on recommendation from their local integrator, Robert Locklear, Minister of Worship and Music at CCCH has become quite fond of the miniature mic. “It has a lot of the same tonal qualities of a regular headset mic with a little lower-end, which was a welcome surprise because of the high-end frequencies boost,” he says. “We don’t have any of the whispyness that we have with most headset mics that are commonplace in houses of worship. We only have one Necklace mic right now, but it has such a great quality that we’re definitely going to purchase more.” 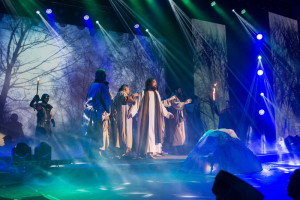 Passion Plays, traditional theatrical depictions of the life and death of Jesus, have been an Easter season staple for centuries and the modern-day touring production “The Thorn,” with a full Elation lighting and LED video package, is arguably one of the best.

“The Thorn,” which has been staged yearly since 1998, breaks from ritual and adopts a more dramatic form, fusing Cirque du Soleil-type aerials, martial arts and state-of-the-art entertainment technology with emotionally powerful performances. This year, the play raised the visual drama even further through use of a dynamic package of Elation Platinum Series and LED-based moving heads, LED Par and effect lights, and LED video displays with haze and special fog effects from Antari.

Illuminate Production Services (www.lightingips.com) of Sacramento provided nearly all of the lighting equipment, labor and production management for the five-week, five-state tour, which was out throughout March and was seen by nearly 75,000 people. Each year more than 60 professional and volunteer cast and crew join “The Thorn” to take the show on the road. In each city, the touring cast and crew is joined by hundreds of local actors and artists to bring the story to life.

Yamaha will debut the company’s new TF series digital consoles at Prolight+Sound 2015 in Frankfurt, Germany, heralding the arrival of a reimagined way to mix live performance. Yamaha introduced the …

Newest Component to the Company’s Masterclass Software Offers Extensive Analysis and Display Functions RTW, the market leader in visual audio meters and monitoring devices, will have on display at the 2015 …

The Kramer WP−5VH2 offers Ease of Use and Convenience for AV Management in Classrooms, Meeting Spaces, and Hotel Rooms Kramer announced today the release of the WP−5VH2 ultra HD HDBaseT …

Riedel Communications, provider of pioneering real-time video, audio, data, and communications networks, today announced that its Tango TNG-200 fully networked communications platform is now shipping. Based on the RAVENNA/AES67 and …

Riedel Communications, provider of pioneering real-time video, audio, data, and communications networks, today announced that the RSP-2318 Smartpanel is now available with a choice of three intercom apps, each with …