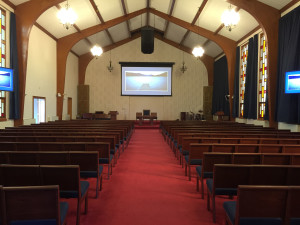 Fort Knox is perhaps best known for the gold bullion depository that the U.S. Department of the Treasury maintains there, in northwestern Kentucky. But the huge base’s 100,000-plus acres also house the U.S. Army Human Resources Department’s Command Center of Excellence, the Army Cadet Command and the Army Accessions Command. Over 12,000 people reside and work on the base, bringing enormous diversity in all areas of life, including worship. Four chapels on base serve many of them, and they were collectively upgraded recently with RoomMatch® and Panaray® loudspeaker systems from Bose® Professional.

AV systems integrators SKC and AXXIS jointly worked on the project, and they formed an excellent pair: nationally based SKC brought scale to the project and Louisville-based AXXIS, a Bose Professional dealer managed the installation. Keith Stengl, Design Engineer at SKC, the lead contractor on the project, stated, “We always put the customer’s needs first, and it was clear that the challenges that these venues presented would be best served by Bose technology.”

There are four chapels on the base: Built in 1899, Main Post Chapel seats about 150 and is the oldest building standing on the base; Calvary Chapel seats about 300 and does double duty as a training and orientation facility, and is under the direct command of the base commander; O’Neil Chapel is perhaps the most basic of the four venues, seating about 200 and with simple instrumentation used for praise music; Prichard Place Chapel is just the opposite — a 500-seat venue with an acoustically challenging A-frame roof design. Bose offered a good solution for each venue.

Prichard Place Chapel’s 43-foot-tall interior could have acted as a troublesome bass node with the wrong system; instead, it was tamed with a Bose RoomMatch system consisting of an RM5510 module on top for the farthest throw, followed by an RM7010, RM9020 and two RM12020 modules, all powered by a pair of Bose PowerMatch® PM8500N networked configurable amplifiers. “The Prichard Place Chapel was the most challenging of all,” Stengl recalls. “Besides the A-frame design, which caused flutter echoes and bass complications, it was also all hard, reflective surfaces. Keeping the sound off of those and on the seating area would be extremely difficult. But with the combination of using the Bose Modeler® software to analyze the room and the precision waveguides in the RoomMatch loudspeakers, we achieved very intelligible sound in a very challenging space.”

Calvary Chapel received the most comprehensive upgrade, including new video projection and switching systems and a videoconferencing system, underscoring its dual role as a training facility and worship venue. Intelligible sound was critical, and it was achieved using a system consisting of RoomMatch RM5510, RM7010, RM9020 and RM12020 modules, buttressed by four Panaray 310M speakers for fills and powered by two PowerMatch PM8500N networked amplifiers.

The Main Post Chapel’s sound is now vastly improved thanks to a system consisting of four Panaray 402 Series II full-range loudspeakers and a Panaray MB24 modular bass loudspeaker, powered by one PowerMatch PM4500 configurable amplifier. “The Main Post Chapel was interesting in that there are several pillars inside that could affect the sound coverage,” says Stengl. “We used Modeler software and it made its recommendations. At first they seemed counterintuitive, but I’ve learned to trust Modeler and we installed the Panaray speakers. The result was everything the modeling predicted, so I’ve learned to trust it — and Bose — even more.”