Video production at four campuses now based on FUJINON lenses 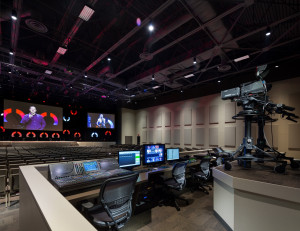 At these four locations, 12Stone—a Wesleyan evangelical Christian Church—offers 20 worship services weekly to over 30,000 attendees. The new 1,000-seat Sugarloaf worship center joins three other regional locations, including the Central campus (in Lawrenceville, GA) with its 2,600 seat-worship center, the Hamilton Mill campus with an 800-seat worship center and Flowery Branch with 500 seats. 12Stone also webcasts select services at its website.

“So when it came time to choose HD lenses for the new Sugarloaf campus, we were very comfortable staying with FUJINON.”

In 2014, Blue Hat Design returned to install a fully equipped HD video production facility at the new Sugarloaf campus. In June 2014, Blue Hat Design won a 2014 Commercial Integrator BEST Award for Best House of Worship Project for its innovative design, which allows 12StoneChurch to share its HD video and audio production facility with the John C. Maxwell Leadership Center. The architecturally stunning Sugarloaf building—designed by Wakefield, Beasley & Associates—houses both 12Stone’s worship center as well as the MaxwellCenter, which provides training for pastors and motivational speakers.

Sugarloaf is unique in that it has a full television studio, equipped with its own lighting grid, LED lighting panels, 3G fiber camera interconnections, audio connections, three 16-foot tall cyc walls and seating for a 200-member audience. It also has two Grass Valley Karerra 2.5 ME switchers, several Yamaha audio mixing consoles with Dante networking, Christie projectors and top of the line video monitors and IMAG displays.
12Stone’s multi-campus design allows video production of the services—including musical performances, scriptures and sermons—to originate from any of the four locations. The video is then distributed via a dedicated video over fiber IP network matrix that connects all four locations, and stored on Grass Valley K2 Summit 3G or K2 Solo 3G Elite servers for local playback at each of the worship centers.

“Over the years, 12StoneChurch has had a very positive experience with FUJINON lenses and the outstanding service and support from our Fujifilm Sales Rep Susan Teuscher, who helped us greatly on this Sugarloaf project,” Roche said. “That’s why we like FUJINON lenses and plan to stay with this brand for our next 12StoneChurch renovation slated for 2015.”
This year marks FUJIFILM’s 80th anniversary, and 40 years for the Optical Devices Division, formerly known as FUJINON, in the U.S.