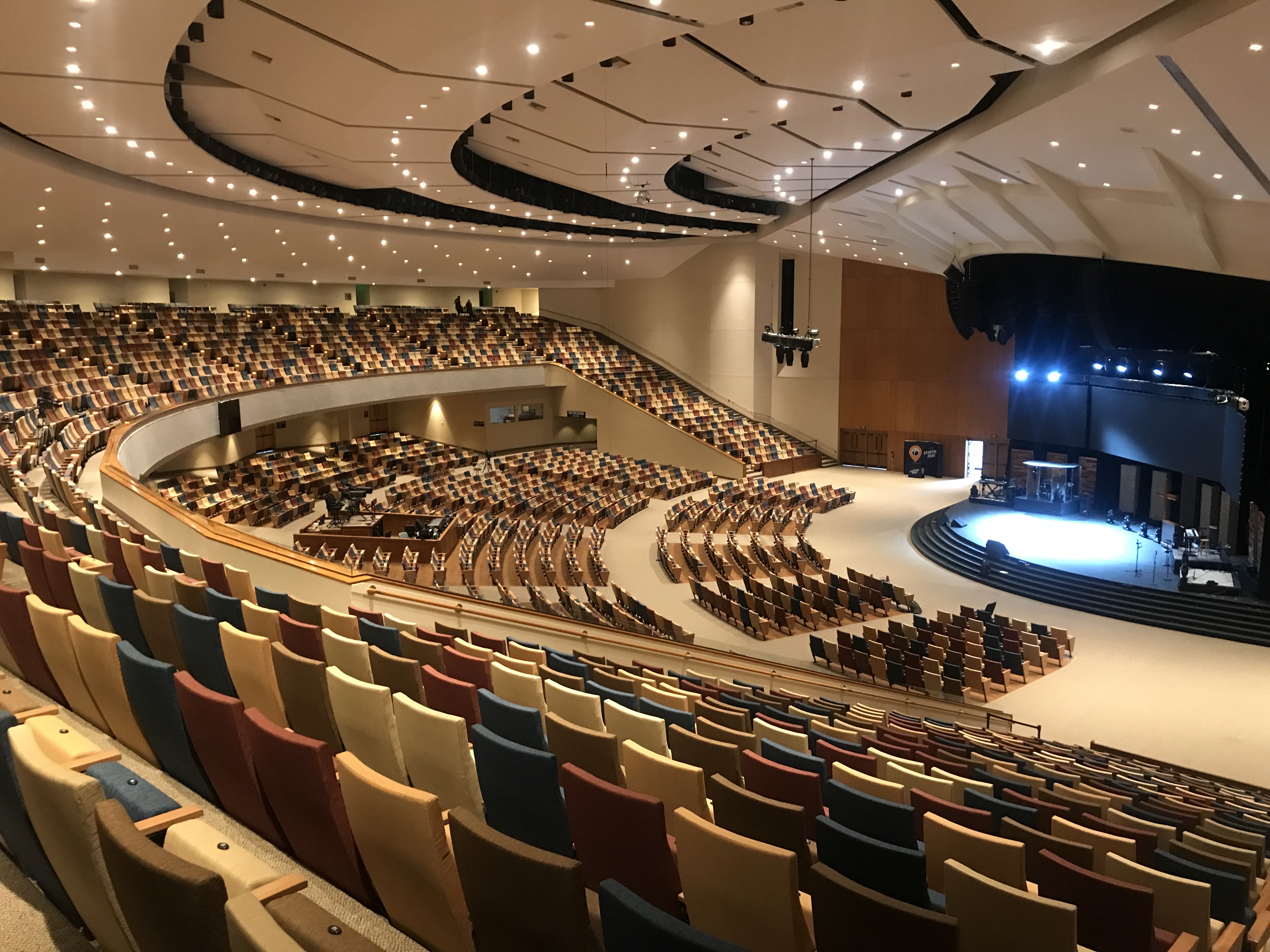 Yonkers, New York (9/4/2019) – With a rich history of providing a genuine worship experience to families across the greater Orlando area, Calvary Orlando has recently set off on a new direction. Operating in a facility that was becoming increasingly challenged by an outdated production design, the church made the decision to renovate their entire worship environment. Wanting to better illuminate the sanctuary as part of the complete lighting and dimming upgrade, they turned to the specialists at Techni-Lux who designed and specified a new house system filled with Chalice LED downlights from Altman Lighting.

“Calvary Orlando is the second largest church in the Orlando area, and it is also used as a special event and live concert facility,” began Tony Hansen, Techni-Lux Head Lighting Designer and Project Specialist. “We have worked with them for a number of years, and this is a project that has really been in need for some time. The lighting system dated back to its original construction and it was very antiquated. Additionally, they were having consistent issues with the dimming system and it was becoming difficult to maintain.”

As Calvary Orlando began the sanctuary renovation process, new lighting fixtures were not originally part of plan, but soon became a design possibility. Wanting to maintain the aesthetics of the facility while still upgrading the lighting experience, the church was attracted to the performance and ease of installation offered by a Chalice solution.

“Prior to the lighting renovation, we had only been discussing putting in a new dimming system, but as funding for the lights started to come into place, the Altman Chalice was also coming onto the market,” continued Hansen. “The church started testing products with multiple demos, and what we found was that the Chalice could easily drop in place without a lot of modification. This made them an ideal solution because there were over 450 house fixtures which needed to be replaced with many as high as 65-feet off the ground that could only be accessed from above.”

The Chalice LED Series is the most diverse range of downlights available with mounting options that include pendant, recessed, aircraft cable, wall and yoke mount, plus dimming choices ranging from Mains Dimming to DMX. Additionally, with a wide variety of LED color or white light options, and numerous lens or reflector choices, the Chalice LED Series is the most versatile and easy to integrate downlight solution available today.

“The Chalice luminaires fit perfectly into place for a one-to-one fixture replacement and we were even able to use the existing trim fitting as well,” added Hansen. “It was great to be able to use a 150W LED solution to replace an outdated 1000W incandescent fixture, and they fit the bill perfectly. It was also very beneficial to have the option to go through all the reflector choices for custom reflector mapping throughout the entire design. The coverage that we got off the initial run of the new system far surpassed what we had expected, and it made quite a difference.”

Time for the installation of the new house lighting design, the team at Techni-Lux coordinated with Kevin White of Toolman Electric and Kirk O’Connor of CYA Productions, who would be challenged to complete the project in under one week. With a plan in place for multiple teams to work side-by-side, the Chalice luminaires were lifted high into the catwalk and the transformation got underway.

“The facility was shut down on a Sunday afternoon at 2pm, and we had to electrically re-do the entire system by the following Saturday, so it was a quick turn-around,” explained Hansen. “Luckily the catwalk structure is a fairly cavernous space about 25-30 feet high and everything was initially designed to be able to replace the incandescent lamps from above. This was a tremendous advantage during the change-out because we could walk right next to the fixtures, swap them out, and then run the new data cabling as well. We had several teams working simultaneously and we used both the 70W and the 150W Chalice models depending on the throw distance from the catwalk.”

Now ready to establish the control system for the house lighting, Techni-Lux implemented a design with both a theatrical lighting console and architectural wall-stations. With the outdated dimming system removed, the Chalice luminaires were also able to be wired for Public Safety modes as well.

“In addition to the lighting renovation, the entire control system got upgraded as well so they now have individual DMX control of the house lights for matrixing, movement and light isolation all controlled through a theatrical console and wall stations,” commented Hansen. “The lights also needed to be part of the emergency backup and Public Safety evacuation system so we installed a DMX data override system that would take over speaking ArtNet to the house lights to go into Panic mode if needed. All of the breakout points and data distribution are then driven on backup power with operational wall stations in the event of a power failure.”

With the design, programming and commissioning services complete, Hansen and the team at Techni-Lux were excited to showcase its power and performance to Calvary Orlando. Wanting to quickly explain just how expansive the new house lighting system truly was, Hansen developed a simple plan for a dramatic Chalice demonstration.

“When we first showed them the new lighting design using the control on the wall stations, we had the house lights at about 70 percent, and they were commenting how bright it was and how great it looked,” concluded Hansen. “We then bumped them up to 100 percent and people were blown away by the light quality in the room. Using the individual reflector control, they don’t have the spotting issues that were previously in the space, and the quality of light is phenomenal.”

To find out more about the complete Altman Lighting product line visit www.altmanlighting.com