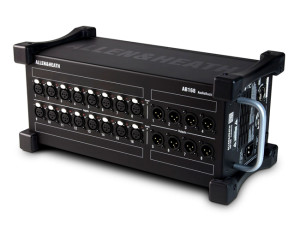 As a church planter, I need equipment that is easy to use, easy to set up and easy to teach others to use.  The average volunteer is generally willing to learn, but most digital consoles I’ve used in a church planting context are somewhat complicated to use unless you’re technically trained.  That is until I encountered the Allen & Heath Qu-32 Digital Console.  This is the first digital console that I’ve seen in a long time that made sense to me as a musician and was easy to figure out as a semi-tech geek.

Out of the Box

I was able to swap out my existing analog mixer and start mixing on the Qu-32 straight out of the box in 15 minutes. This board feels like it was designed with the average Joe in mind.  Everything you need to mix is easily accessible and quick to find, which is extremely important in high pressured mixing situations where you need to make immediate changes during live performances.

There are 33 motorized faders; 32 channels with a master fader.  Each channel has individual Mic/Line inputs (TRS and XLR).  It’s not the typical 32 channels with 8 being ¼ or RCA inputs counting as “channels.”  Each channel features Allen & Heath’s AnalogIQTM total recall preamps, designed to capture the analog signal and convert it to high quality 24bit digital producing a transparent sound reproduction with minimal coloring and distortion.  Quite honestly, I was surprised at how musical the sound coming from the Qu-32 was compared to other digital consoles I’ve used; warm and clear without sounding harsh.  We switched the Qu-32 console with an analog desk and experienced a definite upgrade in the quality of sound.

When an individual channel strip is selected the effects bank known as the “super strip” becomes focused on that one channel.  You can also assign the channel to post/pre-fader with the touch of a button, just like an analog console.  The layout is designed to give you quick access to Preamp Gain, High Pass Filter Frequency, 4 Band Parametric EQ settings, Noise Gate, Compressor and PAN.  There is also a GEQ button that when selected turns the faders into Graphic EQ sliders.  Every channel has automated faders which means any mix can be saved and recalled on a simple USB key.  I really like the Qu-32’s Master Fader, which has its own effects settings so you can treat it like you would when you’re mastering a mixed project.

The touch screen section is where you can dig deep into the brains of the Qu-32.  On the surface, you get a graphical representation of the Parametric EQ and the levels for compression, gating and gain.  Using the Function (Fn) key there’s an entire world of possibilities built into this powerful mixer.  You can easily copy, paste or reset any section of processing, an entire channel or a mix.   There is so much here that you really need to get a board and discover for yourself, but I do want to point out the iLive FX library.  This is a collection of classic reverbs, gated reverbs, delays and modulators taken from the iLive pro touring series. The sounds that come with the console are the best of the best, but the library is also expandable for those who want better!  The Qu-32 has 4 stereo iLive FX busses that are designed to return to the mix on dedicated return channels so you don’t tie up precious input channels.  When you select the easily accessible FX buttons on the Master Fader strip, the faders are converted to FX levels so you can add that particular effect to whatever channel you want… super easy!

Three things to mention here:  First, you can use a digital snake or an analog snake.  Allen & Heath has their own proprietary digital snake that is very cool.  You can get it as a rack mount or as a 16 channel box with 8 outputs.  In the case of the Qu-32 you would get 2 boxes, link them and assign the inputs and outputs in the board.  If you’re upgrading your system or if you’re a portable church… get the digital snake.  It’s worth it.  Second, Allen & Heath have developed a killer app called the Qu-Pad that connects to the mixer via Wi-Fi.  It even has a shelf to put your iPad.  If you’re worried about a Wi-Fi connection, get an Apple Airport and use that as your wireless hub.  You don’t need to be connected to the internet.  You just need a way to link the wireless devices together on the same network.  The mixer connects to the Apple Airport via an Ethernet network port.  Third, The Qu-32 has the option to give up to 10 mixes, 4 stereo group outputs and 2 additional stereo mixes via the Matrix.  That means every diva on your stage could have their own individual mix and give the most stunning performance ever.  When you select a Mix Button it converts the faders to that specific mic, with total recall.  You can EQ separately for monitors and mains. You can also use the Matrix feature to set up individual mixes for webcasting and recording.  In rooms where you have delay stacks or fill in zone speakers where you need independent EQ and delay, you now have the tools at your fingertips.  There’s even a place to plug in your iPhone / iPod.

What about recording live? 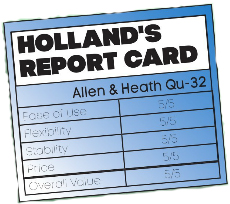 This board is built with the recording musician in mind.  The Qu-32 has a built in interface that steams multi-track audio to your Mac or PC.  All input channels and the Main LR can be recorded at the same time.  It’s supported by Logic, Cubase, Reaper and Pro-Tools.  You can also record via the multi-track USB recorder that records up to 18 channels at 48kHz / 24 bit (DVD quality).  Via USB you can record directly to a hard drive and use recorded audio to playback for virtual sound-checks.  That’s a sound check where it’s virtually like having the musicians there only they’re still chilling at Starbucks.  You can also use the Qu-32 as a recording interface for your computer via the USB output (already Mac compliant).

Allen & Heath have done a great job putting together a powerful, feature rich mixer that is intuitive and easy to use at an affordable price.  Listed at $ 3599.99 for 32 channels of sheer audio power, this is a console that should be seriously considered when making your next purchasing decision.

Holland Davis is the Senior Pastor of Calvary Chapel San Clemente and CEO of worshipsong.com, as well as a veteran worship leader, popular conference speaker, composer of the award winning song Let It Rise and the author of a new book on worship entitled “Let It Rise: A Manual For Worship.”