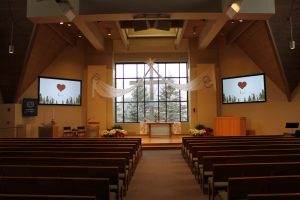 Trinity Lutheran Church was first formed in 1932, and moved to our current site in 1952, when the lower level of the present facility was built. Over the years, the structure changed as additions were built and remodeling occurred. With the completion of the Great Hall wing and several new classrooms in 2007, our church became better equipped to serve the ever-growing membership and ministry needs of our congregation. Our mission statement is to welcome all to worship joyfully, grow in faith and Serve near and far in Jesus’ name.

When our Great Hall was completed in 2007, it was designed to have beautiful light flooding in through very large windows on five sides and a skylight above the altar, which made it difficult to view anything on the screens placed on either side of the altar. When we decided it was time to upgrade our current AVL in the worship hall, finding a projection solution that would cut through the ambient light and provide crisp, clear images on screen was one of our biggest goals.

Kevin from Excel AV Group suggested we switch to Ambient Light Rejecting (ALR) screens and long throw projectors installed at the rear of the church. He brought in a SI Slate screen to compare with our current system. When we saw the difference we were blown away with the clarity and contrast. Installation took place two weeks before our Christmas services-just in time to stream a live video of our glowing lit Advent candle-combined with the beautiful music, our congregation felt very blessed. We look forward to all the possibilities these screens will provide for us into the future.

When Trinity Lutheran chose to upgrade their worship hall A/V system, they were met with a number of common challenges facing many Houses of Worship. The church was struggling with an older projection system that was barely visible due to the high ambient lighting conditions. They also needed to convert to the 16:9 format versus 4:3 and wanted a system that would accurately show a live image, whereas with the old system the image didn’t show up. 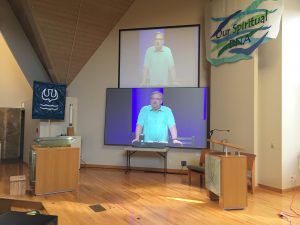 I was introduced to the Screen Innovations line by one of our rep firms BP Marketing. Having been in the AV business 25 years every once in a while a technology will come out that is a complete “game changer.” I knew when it was first demoed to us that this would be huge for us on specific installs. Trinity Lutheran’s sanctuary seats approximately 250 people and the furthest viewer from the screen is at 60′. The two projection screens we chose are 133″ diagonal, 16:9 format and the projectors chosen are the Vivitek DU8090Z Laser engine.

The Ambient Light Rejecting (ALR) Slate 1.2 screens from SI, combined with the high contrast of the Vivitek 8,000 lumen laser projector, make all the difference in portraying a superior image in a difficult space with high ambient light conditions. Since the church was accustomed to wall mounted screens with the previous 4:3 matte white screens, we chose to install in the same locations with SI’s 5 series frames high up on the wall. The Slate 1.2 material was a perfect fit for Trinity and Excel AV Group continues to specify it in venue’s like this where it makes sense.

This installation, more than any other that our company has done, really shows how ambient light rejection technology can be so useful. We ended up specifying a 5 series screen with the Slate 1.2 screen material. Skyler Meek, Director of Marketing, Screen Innovations We spent three years in the lab to create a flexible, ALR (ambient light rejecting) screen that can go massive, and adheres to only the strictest visual acuity and uniformity standards. Most importantly – it had to be affordable.

Thanks to its flexible chemical makeup, the multi-particle Slate material can roll tightly and be stretched when necessary. That means we can utilize it in a lot of unique applications, with and without edges. There is also the added benefit of being able to roll it on a small core for shipping, which simplifies logistical challenges. Slate screens come in rolls up to 189in (4800mm) tall, which equates to sizes up to 375in (9525mm) diagonally in 16:9. We can also seam the material with our proprietary micro-seaming technique, creating images nearly double that size. Imagine a 16ft tall optical screen!