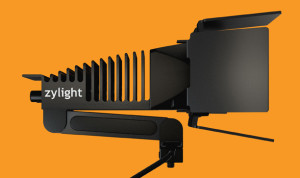 To celebrate the U.S. debut of its Newz on-camera light, premium LED lighting manufacturer Zylight is encouraging attendees at the 2015 NAB Show in Las Vegas, Nev., to “Spread the Newz” via Twitter. During the #SpreadTheNewz NAB Giveaway, Zylight will award one Newz each day during the show to someone who tweets about the new compact light, which is ideal for broadcast news and other run-and-gun shooting applications.

The free four-day contest begins on April 13 at 8 a.m. PDT and concludes on April 16 when the NAB exhibit hall closes at 2 p.m. PDT. Entrants should tweet to @Zylight with the hashtags #SpreadTheNewz and #Zylight included in the message. Zylight will randomly select one tweet from each day’s tweets to receive a free Newz on-camera light. NAB attendees are also encouraged to include photos of the Zylight booth (C8043) in their tweets.

“Zylight is very proud of our Newz on-camera light because it really delivers a higher quality of light than the other low-cost LED camera lights on the market,” said Charlie Collias, senior vice president of worldwide sales for Zylight. “We want everyone to know about it, and we’re looking forward to seeing all the creative ways NAB attendees will help us ‘Spread the Newz.’”

Designed primarily for ENG and similar remote shoots, the Newz is a variable white light with brightness settings from tungsten (3200K) to daylight (5600K) that provides a 60-degree beam spread at full width half maximum (FWHM) for a soft falloff around the edges. With quantum dot technology and proprietary LED chips, the fully dimmable Newz delivers a very high quality of light for true color reproduction that rivals the company’s flagship F8 LED Fresnel.

The Newz is the first lighting instrument available on Zylight’s new compact ZX platform. Its unique articulated arm and custom barn doors allow shooters to easily adjust the height, angle, and spread of the light. Plus, it features ZyLink™, Zylight’s wireless technology, so it can be linked to multiple Zylights for simultaneous remote control.

People who do not attend the 2015 NAB Show can still enter the #SpreadTheNewz NAB Giveaway, and a booth photo is not required for a valid contest entry. The Newz has an MSRP of $429 and will be available in May.