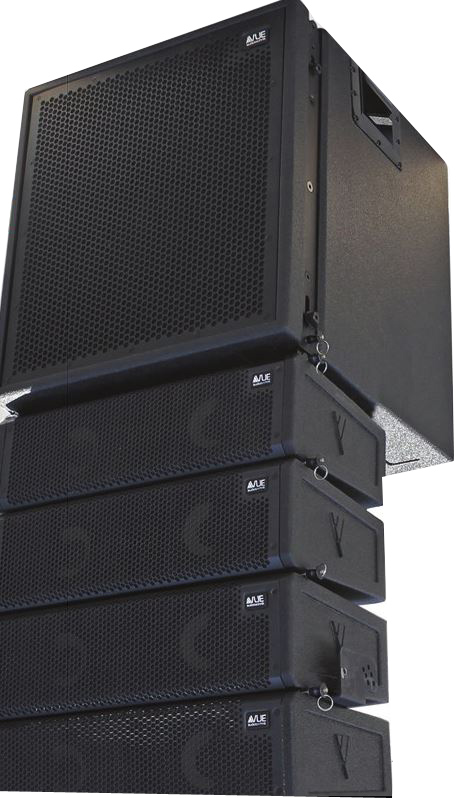 Grace Church is a 27-year old church with five locations in central Indiana, London, England, and Sydney Australia. A focus on children and students has always been a part of our DNA, so going in to our annual high school retreat last February, we knew we needed a system that could support high-energy music and spoken word. We partnered with Cincinnati, OH-based Access Audio for audio, lighting, staging and power support.

The biggest hurdle with this retreat was the venue itself. It is essentially a 150’ x 100’ gymnasium, complete with concrete floors and metal walls and roofing. There isn’t a soft surface to be found. In previous years, the most difficult part of the audio system was getting clarity in a room with absurd reflections and a reverberation time that would make Celine Dion jealous. Enter VUE Audiotechnik and their al-Class of scalable line arrays.

We had originally spec’d a constant curvature array from a different manufacturer, but Access Audio informed us of the availability of the VUE system. We were eager to try it, given our experience with several of VUE’s point-source active and passive speaker products from previous events.

I am not a huge believer in life-changing line arrays. It is my firm belief that an audio engineer worth her or his salt can create a great mix with any speaker. Don’t get me wrong: I am not advocating for the unrecognizable brand of speaker you can find at your local big box store. You absolutely get what you pay for. But microphone selection, head amplifier, signal chain, audio console, mixing and amplifier play as crucial a role to the outcome as the object the sound is coming out of. Most major manufacturers make fine products, and the final decision often comes down to preference, level of support or the obtainability of hardware and rigging.

With 300 students and adult leaders present, we knew we needed an audio system that could deliver high volume and high intelligibility. What is the point of parting people’s hair with volume if they cannot understand what they are hearing? Also highly important to us was ease of rigging (structural limitations necessitated the PA be ground-supported) and coverage precision. Students often stand within feet of the stage during musical worship, so we needed a system that could deliver tight coverage to that area while also keeping sound off the vast reflective surfaces.

To that end, Access Audio’s final design for the event included left and right hangs of al-8 arrays, comprised of six elements each. Low end was lovingly delivered via al-8SB 18-inch subwoofers, four per side ground stacked on VUE’s custom carts. Power and DSP were supplied by VUEDrive V4-d and V6-d systems engines. A Yamaha CL-5 and Lake LM-44 sat at FOH and handled mix and overall system processing duties, respectively. With Yamaha Rio-series boxes on stage, the entire signal flow traveled via Dante with a redundant AES/ EBU connection to the VUEDrive systems engines as backup. Monitoring onstage was supplied via Aviom personal monitor mixers with Shure SE425 and SE535 sound-isolating earphones.

We were extremely pleased with the performance of the VUE system. Coverage was so tight that you could easily discern a 5dB drop when you stepped one foot outside the listening environment. This went a long way to reducing reflections off the side and back walls. Low frequencies, which have a habit of escaping your mix and rummaging around the room wildly, were controlled. The al-8 boxes provided excellent reproduction of lower frequencies, allowing the al-8SB subwoofers to supplement the mix rather than engulf it. 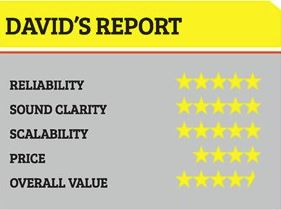 A quick note on the least-sexy thing in audio: rigging. Do not underestimate the power of rigging to ruin your day. The world’s best line array is not worth having if it takes all day to rig (and you still aren’t quite sure you did it correctly). I was impressed at the ingenuity and simplicity of the VUE rigging hardware. Well done!

Overall, the audio system provided by Access Audio allowed us to create an environment for students to experience God. Which is really what this is all about. As volunteer or staff technicians for houses of worship, our quest for the ultimate fill-inthe-blank piece of gear is really our quest to remove distractions and provide the best possible experience for kids, students and adults. I look forward to the next opportunity to use the VUE system and would absolutely recommend you consider them for your next audio system rental or purchase.

DAVID CAUDLE HAS WORKED FOR GRACE CHURCH SINCE 2012 AND HAS BEEN MIXING FOR 17 YEARS. HE CAN BE REACHED AT DAVIDC@GRACECHURCH.US.