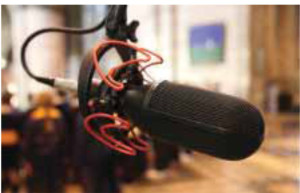 There’s nothing quite like location recording. In a studio it’s all about microphone selection and placement, plus artistic temperaments. On location, much more consideration has to be given to the performing space and the type of music. The bigger the space and the more diverse the performances, the greater the challenge for the recording engineer. If you add factors such as an audience, a venue that wishes to keep mics to a minimum, and everything recorded live, you reach a point beyond which some will tread with fear. Personally, I love this sort of scenario. But I would be a lot less conﬁdent doing what I do if it wasn’t for the SoundField microphone from TSL Products. The SoundField is a concept as much as a microphone and spawned a number of models over the years. I have other microphones, but I never go on location without a SoundField. The current tool of choice for me is the digital DSF-1.

Being an English engineer/producer working mainly on location, I have the privilege of recording in some of our country’s ancient churches and cathedrals. Typically the building will be stone-built and cruciform (in the shape of a cross). Often it will amount to a very big space, with lofty ceilings, side aisles, and various chapels added on. Each part of the structure has its own sound reﬂ ections, its own acoustic personality. Overall, that makes for a formidable sonic signature for the sound engineer to deal with. I know of no microphone that can cope with this situation better than the SoundField. The best way I can describe it is, it ‘makes sense’ of whatever environment you put it in.

The challenges of space

I was recently asked by Hereford Cathedral School to record a concert in Hereford Cathedral, which is next door to mark the centenary of English composer, Benjamin Britten. There was no orchestra on this occasion, only with ﬁ ve of their choirs plus organ, piano and a string quartet; although, I have recorded a number of their performances where there has been. Construction of Hereford Cathedral began in 1107 and completed in 1148 and it’s not just ancient but extremely beautiful. It is 235 feet long and 106 feet wide at its widest point, with ceilings that tower 64 feet high. Within the building’s cruciform shape, choirs perform in the Quire (the head of the cross), in the Crossing (where the two parts of the cross meet), and at the top of the nave (the main stem). The audience occupy the nave itself. Just to add to the mix, there is an introit sung by one of the choirs as church-goers proceed in from one of the cathedral entrances, while the string quartet is positioned to one side of the Crossing. At the time of recording, there was little time to set up, as the concert followed closely after a service.

Ready in no time

When recording, I like to do things unobtrusively if I can. I could mount the SoundField on a tall stand in the middle of the recording space, but I prefer to use a long boom supported by a heavy lighting stand at the side. This means there are no cables that the performers or public can trip over. In fact everyone has complete freedom and performers are pretty much unaware of the mic up in the air. By the push of a button on the controller, it can be used as a side-addressed or end-ﬁre mic.

The beauty of the DSF-1 microphone system is that the complexity and the math are contained within it. All the engineer has to do is install one microphone, one cable and a 1U control unit, plus a recording device. Sitting in the vestry, 150 feet from the SoundField, I was able to set the pattern and width of the stereo output completely remotely, using the simple rotary controls.

I tend to record the stereo AES output but also the ‘B-Format’ outputs. B-format is a patented SoundField invention and the heart of the whole concept. Within the microphone are four precision-aligned, superior quality elements positioned in such a way that all audio information is accurately captured from all directions. The four signals are combined in the DSF-1 Digital Controller into a B-Format signal that consists of ‘X,’ which is front/back information or depth; ‘Y,’ which is left/ right information or width; ‘Z,’ which is up/down information or height; and ‘W,’ the central point from which the other three elements are referenced. By recording the ‘W’ and ‘X’ and ‘Y’ and ‘Z’ from the two additional AES outputs (four channels), I can, using software, re-process the stereo or even create 5.1 surround in post or at any time in the future. This ability to ‘steer’ the microphone after the event, or to change the stereo image, is an enormous beneﬁ t for recording live music, when no one is completely sure what will happen, or where, until it does! After the event, I was able to re-focus the sound for each choir taking part, and to steer the mic to the right, to bring the string quartet into a more central perspective.

I recorded the Hereford concert in my usual way, to a SADiE LRX location recording system, which I clocked from the DSF-1 Controller as it was the ﬁ rst device in the chain. I cannot speak highly enough of the DSF-1 electronics. All sample rates are provided and the digital clock is rock solid. It also has the most fantastic limiter you will ever ﬁ nd. It’s so good, I leave it permanently switched on and I would defy anyone to say they could hear it working. And the microphone itself is supremely accurate and extremely quiet. There’s nothing quite like location recording, and there’s nothing more reassuring than having a SoundField with you when you do!

Steve Swinden is an engineer/producer at Chorum Records: www.chorum.co.uk