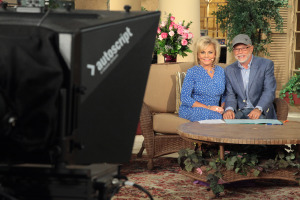 A daily, 60-minute TV program, airing throughout the US, Canada and internationally through multiple broadcasts on DIRECTV, Dish Network and other satellite systems, “The Jim Bakker Show” brings the ministry of Pastor Jim Bakker and his wife, Lori, to millions of followers worldwide. The show’s Grace Street Studio in the Christian Retreat Center of Morningside, just outside Branson, Missouri, recently added an Autoscript E.P.I.C. teleprompter to assist with the series’ production. Additional E.P.I.C. purchases are planned before the end of this year.

Prior to acquiring the E.P.I.C., “The Jim Bakker Show” did not use teleprompters. “The thought of using a teleprompter was something we hadn’t considered as we’ve been used to doing things ‘off the cuff,’ but as we began to do more research into certain topics and news sources it became very necessary and helpful to employ a prompter,” says Andrew Leitzen, executive vice president of “The Jim Bakker Show.”

The production team polled its many connections to broadcast professionals and veterans asking for their teleprompter recommendations. “Each replied with the name Autoscript,” Leitzen reports. “When we attended NAB we saw an E.P.I.C. in use, and that was the icing on the cake.”

Although the Morningside team produces other programming, “The Jim Bakker Show” is their primary focus. “We use E.P.I.C. both for taping the main portions of the show as well as for commercial production, when the talent is required to look directly into the camera,” he explains. “A division of our Morningside Master’s Media School of Broadcasting is a media internship program that produces its own Internet content and television show from a small HD studio here. They also utilize the teleprompter on a regular basis.”

The well-equipped Grace Street Studio features six Sony HSC-100R Triax cameras with Fujinon HD lenses, which are soon to be connected to a new Grass Valley Karrera switcher. The E.P.I.C. is paired with one of the Sony cameras mounted on a Vinten Quattro-L pedestal.

Programs are edited on multiple Apple Mac Pro systems running Final Cut Pro 7 and Adobe CS6 Suite, with Photoshop and After Effects, and close-captioned in-house before distribution. Later this summer FTP delivery of episodes is slated for testing.

Scripts for “The Jim Bakker Show” are prepared by a team of researchers who feed material to a central writer using Google Docs and Google Drive web-based software for ease of collaboration and revision, Leitzen explains. “Once the script is locked, all necessary information is loaded into Autoscript’s WinPlus software for prompting. We function mainly with cues and rolling scripts, and at several points in the show we do flash messages to our talent during taping. Our prompter operator is a member of our research team and loves how simple it is to add or remove material on the fly, especially during a live taping, which allows him to handle any changes that might occur.”

While the E.P.I.C. is still new to “The Jim Bakker Show,” Leitzen says, “It is performing very well. We’ve used it in a variety of situations and could not be more pleased with it.”

He cites the E.P.I.C.’s bright and clear LED screen as a popular feature. “We can see it from anywhere we put it,” he reports. “We also like how others are not distracted by its operation.”

Leitzen notes that plans call for the purchase of four more E.P.I.C. teleprompters so a total of five of the six studio cameras will be outfitted with systems. “That will enable our talent to use them wherever they like in the studio; we won’t have to figure out how to get the prompter to them.” Plans are also underway to build a third studio on site at Grace Street.