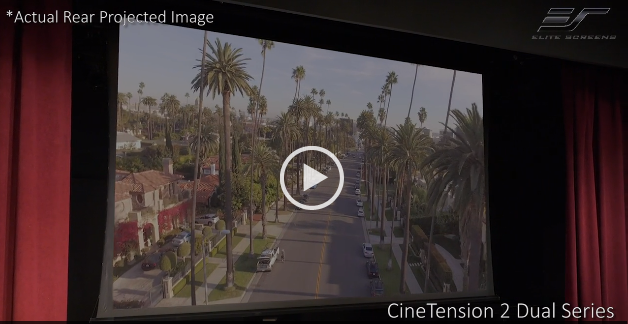 Although Elite’s videographer documented the installation, the case study would remain incomplete until an authentic testimonial was acquired. For this, Miles Cooper, an actor at the Beverly Hills Playhouse sat down to give his testimonial after using the screen on multiple occasions. The venue is 35 years old and has been the home of many Hollywood A-list celebrities such as George Clooney, Gladys Knight, Michael Pena, Tom Selleck, Patrick Swayze, and many more. Miles Cooper is a rising star continuing that tradition.

Beverly Hills Playhouse features a scene study class and the screen is primarily used to show it’s student’s films. “We chose the rear projection screen because we can’t have the projector in front since the backs of the student’s heads would shadow the screen,” Said Cooper in his description of the screen’s use. “The actors and film makers can now stand in front of the screen anyway and they won’t cast a shadow on the material.” When asked about the setup, Cooper replied “The installation was super easy. So, we had a sturdy metal (ceiling beam) with some brackets and it literally took about 30-minutes. It was super easy to install and now it just takes a click of the button and the screen comes down.”

The dual-projection material means that regardless if it is front or rear projection, there is an equally bright and clear picture on either side of the material. If Elite can provide a product trusted by the Hollywood A-list, imagine the possibilities everywhere else.