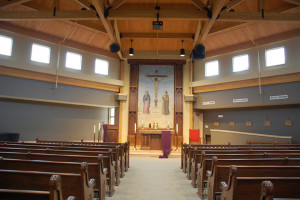 Located across street from the Minnesota State University campus in Mankato, the St. Thomas More Catholic Newman Center has served students’ spiritual and social needs since 1921. Recently, the Center moved to a brand new building with an integrated, building-wide A/V system that includes a purpose-built sound system in the chapel. To design and install the new sound system, the Newman Center contacted Burnsville, Minnesota-based Intermedia Systems Group.

The octagonal 100-seat chapel hosts services three times a week, and is also home to occasional small concerts and other events. The new system had to be capable of supporting musical performances, as well as reinforcing clear, intelligible speech.

The system is centered around a pair of Fulcrum Acoustic CX1277 coaxial loudspeakers. As Intermedia president and system designer Doug Klein explains, “For this application, coaxial speakers just made sense, and Fulcrum Acoustic is well known for great coaxial technology. With the CX1277s and Fulcrum’s DSP tunings, we were able to achieve very even coverage across the entire room. We didn’t have to spend a lot of time tuning the room. We just had to find the room anomalies.”

For sub bass, Klein chose a Fulcrum Acoustic Sub115 15-inch, direct radiating subwoofer, delivering powerful bottom end down to 30Hz. The entire system was mounted to the bottoms of beams.

“Another reason we chose the CX1277 was the coaxial’s non-traditional 75 x 75 degree dispersion, which fit the Newman chapel very well,” explains Klein. “The way we mounted them, their sound is evenly distributed, yet confined to the seating area, so we didn’t have to deal with a lot of overflow audio that would have caused comb filtering.”

“We actually designed the Newman Center system twice because the final design was completely different from the original,” notes Intermedia system salesman Joel Evermann. “The size of the facility was reduced but most requirements stayed the same. The Fulcrum product line provided the best solution and enabled us to adjust our design with no problem.”

Working with the Newman Center team was an “awesome pleasure,” recalls Klein. Best of all, the Newman Center folks were delighted with the new system, as were Klein and Evermann. Klein sums it up in four words: “The system sounds fantastic!”