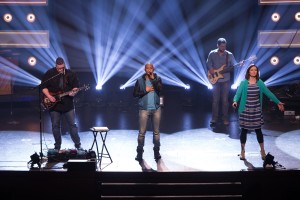 In 1948 two women on a train bound for Chicago prayed and talked together about ways they could better serve God. By the time they reached their destination, the seeds for what would become Parkview Christian Church were born. To some it might seem unlikely that such an encounter would lead to the formation of a vibrant church that, even as it passed its 50th anniversary, would be ranked as one of the 100 fastest growing houses of worship in the US by Outreach Magazine.

Parkview Christian, though, has made a habit of achieving surprising things though its history. Starting out in a storefront, the church has grown steadily into a two-campus house of worship by working to meet the changing needs and expectations of worshippers. The latest example of this was the engaging Easter service production at its Orland Park campus, which achieved a beautiful balance between engendering a warm welcoming feeling and generating big exciting looks, thanks in large measure to the skillful deployment of CHAUVET Professional Rogue RH1 Hybrid fixtures, supplied for the occasion from lighting and production company JR Lighting Design, Inc.

“We have a long-standing relationship with Parkview Christian Church, having long-term rental agreements with the church in place. We handle service and support for them as well,” said Jason Reberski, president of JR Lighting Design, Inc. “As part of our service, we provide full lighting and special-effects production to the church for special occasions like Easter and Christmas.”

The corner-loaded building creates special lighting challenges that Reberski faced when implementing the Easter lighting design. The tapered interior of the church sanctuary, along with its relatively high balcony, demands special consideration when attempting to serve up large lighting looks without creating an overly imposing feeling

“Maintaining large looks while minimizing light lingering in the eyes of the audience was a challenge, given the extremely wide, tapered design of the space and the very high balcony,” said Reberski. “The Rogues have a variety of features that allowed us to create big looks in this space without overpowering the people in the church.”

“The four fixture clusters allow us to create complex fanning looks such as ACL-style fans, large ‘chunks’ of light, complex crisscross looks and, in spot mode, large walls of textured light,” said the LD. “It really comes down to defining the space and creating far-reaching looks that appear impressive and big both to the audience and the HD broadcast, but are also well contained in deference to the physical parameters of the site.”

Reberski also credits the versatility of the Rogue RH1 Hybrid, which serves as both a spot and a beam fixture, with helping him achieve big looks from a tight rig. “The wide feature set of the Rogues was invaluable,” he said. “The fixture can be made to appear like a beam fixture, a spot fixture, or a wash fixture in the same show, which greatly increased our ability to create a variegated and dynamic design.”

“The Rogue’s gobo package also added to the versatility of our Easter show, ranging as it does from theatrical to aerial,” he continued. “We used the Rogues to create subtle theatrical texture to full-on ‘rock and roll’ looks. For Easter, the Rogues did everything from soft wash-like beam-looks, to tight laser-type beam effects, and in spot mode, we used them to create aerial texture and subtle as well as bold sweeps and fly-outs.”

In its website, Parkview Christian Church notes that there are four million people within a 30-mile radius of its two campuses who have not connected to God. “Those four million people aren’t all going to come to us, so we’ll go to them,” declares the church. Reaching out to people with productions like the one created for Easter service is a step toward fulfilling this mission.