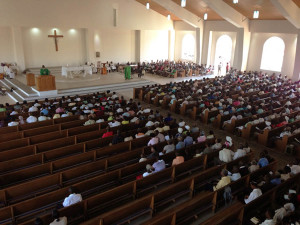 In the aftermath of Haiti’s devastating 2010 earthquake, which killed hundreds of thousands of people and destroyed the infrastructure of its major cities, new construction is renewing hope among the Haitian people, albeit slowly. The earthquake destroyed the Cathedral of Our Lady of the Assumption in the capital city of Port-au-Prince, one of the struggling nation’s prized architectural and cultural landmarks. Although plans are underway to rebuild the cathedral, its completion is still a decade away, in the best case. To bridge the time between now and then, the Catholic Church recently completed a steel-frame open-air cathedral that seats 1,600 adjacent to the old church’s ruins. Miami-based Revelation Sound, Inc. designed and installed the sound reinforcement and electronic clarion systems for the steel-frame cathedral, counting on Ashly Audio processing, amplification, and user interfaces to give its operators, who are far from technical, both intuitive and utterly reliable performance.

“Haiti is five hours away from Miami, but economically, it’s worlds away,” said Michael Melcher, president of Revelation Sound, Inc. “The U.S.-based NGO that funded the steel-frame cathedral was able to meet our fees, but after the project was completed, the church would be on its own. They wouldn’t be able to fly us out to fix problems or make changes. Thus, reliability and ease-of-use were paramount. We have always had great success with Ashly processors, amplifiers, and user interfaces. Their set-up is predictable, and once they’re up and running, they keep running. The Protea™ DSP’s automatic microphone mixing and feedback suppression would allow the church to have sophisticated services without requiring a skilled sound tech. There are plans for an Internet connection, and once that’s up, we’ll tie into the network-ready Ashly gear so that we can make adjustments remotely.” 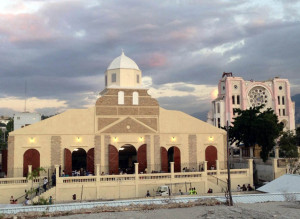 Melcher and his crew had assumed that the sound reinforcement system would be the heart and soul of their work. The electronic clarion system seemed like a nice add-on. It consists of a Technomad Schedulon, which plays the chimes at prescribed times, an Ashly KLR-3200 two-channel amplifier, and four Atlas loudspeakers. “When we first fired up the clarion system, we played a Westminster chime set and all the workers stopped what they were doing and went outside to listen,” Melcher recalled. “The drywall crew leader spoke English, and I went to him to ask what was going on. He had a tear in his eye. He explained that it was the first time in Port-au-Prince that bells had sounded since the Earthquake, nearly five years ago. The bells were a hugely emotional symbol of the city’s restoration, both for Catholics and for non-Catholics alike.”

All of the surfaces in the church – concrete, drywall, and Masonite – are highly reflective, and the large windows and doors are open to the elements during services and events. A generator powers the sound reinforcement and the lights during services. Eight inputs, including several Shure wireless units, wired microphones, and the output from a reconditioned choir mixer, feed an Ashly ne8800M 8-in x 8-out Protea digital system processor. Its output in turn feeds a self-powered Renkus-Heinz Iconyx IC16 steerable line array system and two more Ashly KLR-3200 two-channel amplifiers, which power under-balcony speakers and a choir monitor system. Three Ashly neWR-5 programmable remote controls allow the church to easily select presets for different types of events, with individual level control of each input if needed. Brian Neff, lead tech for the project, said “The Ashly neWR-5 controls are simple to program and easy for the customer to operate.”

Although Revelation Sound, Inc. was present for the contractor’s dedication, the crew had to return to Miami before the official dedication, which would be attended by all the Catholic dignitaries and, among other high-ranking officials, Haiti’s President, Michel Martelly. “We knew we had installed a solid, reliable system, and we knew that they knew how to operate it,” said Melcher. “But still, we were somewhat uncomfortable. We were 700 miles away and of no help should anything go wrong. Happily, everything went exactly as planned, and the system worked perfectly.”