Some new faces include Allen & Heath’s ME-1 personal mixer 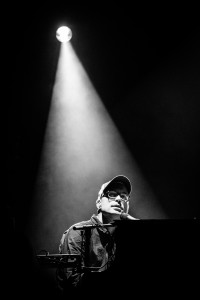 The creation of Singer/Songwriter Andrew Peterson, ‘Behold The Lamb of God’ recently completed its annual tour in grand style with a sold out concert at Nashville’s majestic Ryman Auditorium. A unique concert that begins with all musicians seated in a circle sharing stories about a particular song’s inspiration, then performing it with each other. This ‘circle of songs’ is repeated twice then followed by a start-to-finish performance of Peterson’s folk music styled retelling of the life of Christ in the concert’s second half. “This is a community effort, we all do this tour with our unique gifts – it’s about the synergy of talents and songs” shares Harold Rubens, FOH Engineer for the ‘Lamb of God Tour’ now in his fifth year at the audio helm. “We start rehearsals a few days after Thanksgiving, two days before we open our first show” says Rubens. “Most of our Artists come from Christian Music, some from non-HOW bands as well.” Rubens adds. The ‘Lamb of God’ Tour has attracted some of the highest profile singers and musicians over the years including Alison Krauss, Steven Curtis Chapman, John Foreman and David Wilcox.

The tour travels the mid west and southern states of the US during December with sixteen stops leading up to the concert at the Ryman. During the tour the band consists of 11 musicians including Peterson.

For Rubens, a fair amount of familiar audio gear travels with him including six JBL Vertec front fills and subwoofers to supplement Church sound systems the tour mostly performs in. Sennheiser 300 IEM’s with an assortment of Audio Technica microphones and a Yamaha CL 5 console utilizing WAVES plug-ins for processing round out the gear assortment.
Making its debut on the tour, and replacing an older personal mixing component, is eleven of the new ME-1 personal mixers from Allen & Heath. When it comes to the bands personal mixing onstage, the interaction with my console and the Allen & Heath ME-1’s is fantastic! The ME-1 is so adaptable and with the Dante card it talks the language of any console I use. You pop in the card and it works.” he enthuses.

But What Does The Band Have To Say?

One of the more commonly heard issues a musician or singer has with onstage mixers is two fold; one is that the headphone amp not great, usually meaning it’s not loud enough and clarity suffers if it is. The other common complaint is that there aren’t many options for the musician, limited mixing and recall options to none at all. “Last year the band had to settle for just a simple mix from me and an older model mixer onstage.” recalls Rubens. “During one of the rehearsal sessions, something akin to a domino effect began to happen with the ME-1’s.” Rubens shares. “The drummer and percussionist discovered they could customize their mix exactly how they wanted it, and recall different settings in an instant. From kicks to snares to cymbals with the panning capability, their excitement became infectious. Then the Singers found the sound quality that comes out of the ME-1’s and you could see the lights go on in the band members minds all across the stage.” he adds. In fact, feeling like they had their own monitor engineer with them was a common comment on the tour according to Rubens. Indeed, Todd Bragg, drummer for Crowder & Caedmon’s Call was heard to exclaim: “Best sounding monitor system I’ve ever used. I love the built-in room mic control. It’s great for hearing other players not using vocal mics during rehearsal without having to pull an ear out. It’s also very intuitive to use when creating my mix, making it easier to get into the music I’m playing without any distractions!”

And the Man in the center of the ‘Lamb of God’ tours take on the ME-1?

“At one point Andrew realized he needed to hear his metronome click louder during a performance. After a moment of looking at me he realized he could just reach down and adjust it himself.” shares Rubens. “This doesn’t sound like a big thing, but during a concert it makes a big difference.” he adds. 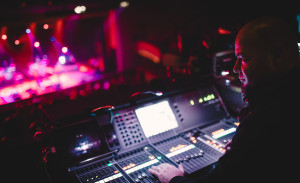 Making audio clear and simple to manipulate is a challenge for eleven musicians as it is-but how about adding nineteen more and a full string ensemble? For the final performance of ‘Behold The Lamb of God’ 2014 tour at the Ryman Auditorium a total of 30 musicians and string players were assembled. “To be a part of a very unique telling of the birth of Christ is something I really love doing, and doing it in the Ryman makes it all the more special.” shares Rubens. ‘The ME-1 from Allen & Heath can be set up in any way a performer needs-from simple to complex- and its easy either way.” he adds.

One feature of the ME-1 that has been getting an unexpected amount of praise is the built in, ambient microphone. Different concert halls, much like the differing acoustics of Church sanctuaries, can often spell hearing challenges for musicians, especially drum and percussion players. When asked about any solution the ME-1 has provided, Travis Nunn, drummer for the tour and Chris Tomlin’s drummer during the year was beyond enthusiastic over his experience with the Allen & Heath ME-1 stating: “The ME-1 is far superior to any personal monitor system out there. I was blown away by the ease of use, the clarity, and the design. Building a mix on the fly is quick and easy, and having control of a built-in ambient mic is such a useful feature. I’d use this on the road any day!” From the front of house, to the bandleader to the musicians and singers of the ‘Behold The Lamb of God’ tour, the new ME-1 from Allen & Heath is building a fan base on the stage side of the concert crowd.