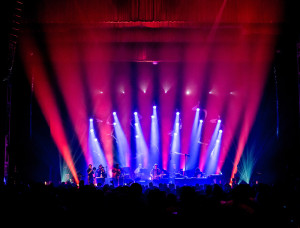 Since becoming the first production designer to adopt GLP’s new X4 platform (back in 2012 with My Morning Jacket), Marc Janowitz (of e26 Design) has been a frequent user, deploying 30 of MMJ’s touring fixtures for Trey Anastasio’s 2012 Traveler tour which followed immediately after. More recently he turned to 18 of the smaller X4S LED heads for last year’s Cage The Elephant tour.

In fact Marc Janowitz’ interest in GLP fixtures dates right back to the original impression 90 and 120Rz Zoom, that first set up GLP’s blueprint for LED moving heads.

He was again at his creative best for Anastasio’s recent tour — this time using 30 white chassis fixtures instead of the earlier black. Whereas the design for the Traveler tour — where Marc shared LD duties with associate designer Ben Price — had been based on the album cover artwork, adapted into a flowing arc shape using the X4, this time there was no album to promote. “So instead we decided to create an atmosphere that was less album specific and more vibey – a bit of a palette cleanser from the previous design.” Looking for ideas that could become set pieces, he stumbled on some ideal stretch shapes from Rose Brand called ‘fly’ that he could use as swirls from which to dangle the lights.

“The idea of having a white set had kept coming up,” he says. Sensing that club/theatre venues weren’t ideal scenarios to make a white cyc work he adopted the X4 in a series of contoured pipes — although he admits that it was the result of a ‘happy accident’.

On a visit to rental company VER NJ to experiment with the ‘fly’ slice ribbon style shapes, he requested the X4 to assist the demo and was told by VER’s John Healy that he only had them in white. At the same time he noticed the curved effects that had been used on their previous tour. “After an hour and a half of trial and error I had the concept, reusing these curvy bits but hung vertically and clad in white tape. The white X4’s and white ‘fly’ pieces were attached — and that became the look.

“I realized that if I was going to hang lights from the same place I hung the scenic and combine them into one integrated piece then the lights themselves also needed to be lightable,” he rationalized. He would often turn the non-used fixtures backwards to that the white backside showed instead of the lens face (the position in his console named ‘ASS OUT’).

Marc Janowitz pinpoints the versatility of the X4 in lighting the seven musicians onstage. “It has a tremendous zoom range. It can be a punchy little VNSP [very narrow spot] beam light all the way up to a wide dispersion cyc light. The pattern macros are a great added bonus to the light — no show is complete without a smiley face! The ability to change the face and still have decent output allows the fixture to be an even more diverse tool, particularly when you only have two or three fixture types on your show.

Another advantage of a one-truck tour, with capacity dominated by backline and audio, was the challenge of packing his design down into a 15ft bus trailer (with no truss or motors and reliant on local venue structures. “Fixtures needed to be small and lightweight and full of features, with the concept sufficiently modular to flex in order to fill the bigger spaces and contract to fit the smaller ones.” Again, the X4 ticked the boxes.

The show itself was programmed on a Hog 3 with Marc running two full expansion wings — making a total of 50 faders and another 40 playback buttons available at any one time.
“Trey doesn’t stick to a set-list or really even make one,” he says. “You get about 10-15 seconds between songs to get into the right page and be ready to light the song. That’s how long it is from the time he says the name of the next song into a microphone piped only to the band and crew’s in-ear monitor to the time he starts to play.”

For helping to anchor the show, Marc Janowitz had high praise for his system tech, Ray Wszolek. “He’s invaluable in so many ways, particularly in how to tiptoe around a very crowded stage and still get the light in the perfect spot every time – even if he has to flip a trash bin upside down to create an impromptu lighting stand!” Further kind words for the TAB crew whose patience & support went above and beyond the call of teamwork. “Without Paul “PI” Ingwersen (PM/SM) we wouldn’t even know where to begin…”

He also commended GLP’s US president Mark Ravenhill and Carl Wake for ongoing support and for proving originally how adoption of the new X4 would solve a bunch of issues — non-homogenized faces being the biggest drawback of everything before it, according to the LD — and for hand-holding the lighting crew during the initial stages

“The impressions delivered then and they continue to deliver,” he says in summary. “Both the X4 and the mini-version X4S are two of my favorites, and will definitely remain a big part of my tool box. Now I’m itching to get my hands on [GLP’s] new X4 Bar light curtain!”